END_OF_DOCUMENT_TOKEN_TO_BE_REPLACED

Unless the gold price breaks higher, says this chart analyst, expect an ultimate slump to $1000...
IF YOU HAVE been following the gold price's bumpy ride this year, two simple charts will tell you everything you need to know about the yellow metal's prospects, writes Greg Guenther in the Rude Awakening from Addison Wiggin's Agora Financial.
Gold futures are sinking this morning [Weds 4 Sept]. The gold price has dropped about $18 from yesterday's highs, putting gold just below $1395. Gold has slowly trended lower over the last 5 sessions. Its price is consolidating just below $1425. So if you're a fan of the rally off its July lows, you should be encouraged by this action.
Right now, gold is approaching an important trading zone. If it successfully penetrates $1425, all of the damage it has endured since mid-May will be repaired. 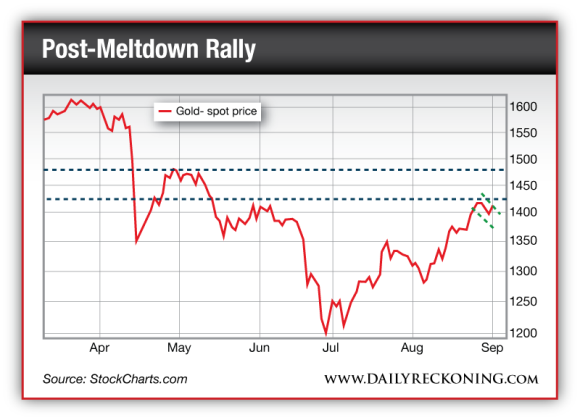 This chart's zone between $1425 and $1475 won't be easy to leave behind. Remember, this is same area that contained the meat of gold's major drawdown back in April.
If long-term bullish buyers really are in control, they will need to make their presence felt if the gold price charts have any chance at all at $1475.
However, if you want to truly understand how important this trading zone has become for gold, you have to view gold's entire bull market over the past decade. 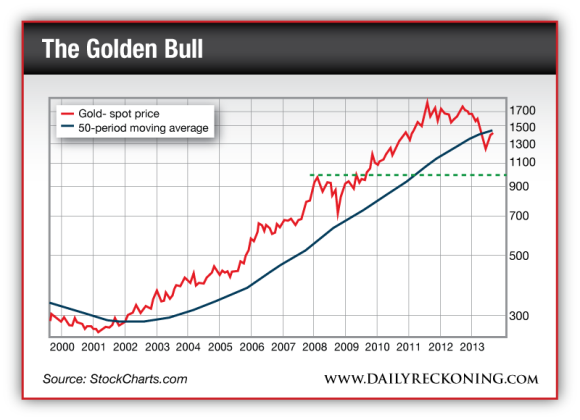 Gold lost the mammoth uptrend that guided it to gains since 2002. Now, the gold price is approaching a point where it could attempt to challenge its underlying moving average. If it fails again near $1450, I expect the metal to continue its downtrend, ultimately landing somewhere between $1100-$1000. That would allow a complete retracement of 2010-2011 push toward $2000.
I've spent a lot of time talking about the stock market's potential make-or-break moments lately. But gold is now getting to the point where a couple of trading weeks in either direction could ultimately decide its fate. If the gold price fails here, expect another leg lower toward my ultimate price target.