END_OF_DOCUMENT_TOKEN_TO_BE_REPLACED

WE START the week with the running of the bulls, writes Greg Canavan in The Daily Reckoning Australia.

Well, sort of. It's not quite Pamplona style, but it's better than we've had for some time.

On Friday, the Aussie market finished above the 5400 point resistance area. It wasn't entirely convincing though. The ASX 200 closed at 5405 points, after being as high as 5428 earlier in the day.

But it should get another kick along today, thanks to a positive session in the US on Friday. The Dow Jones index closed up 0.25%, while the benchmark S&P 500 closed 0.43% higher.

Treasuries yields declined, the US Dollar rallied and gold fell as Federal Reserve boss Janet Yellen joined in the jawboning game, telling markets to expect a rate rise in the coming months.

That means either June or July, as the Fed meets to decide on rates in both of these months. After that, the next meeting isn't until 20 September. Of course, the Fed is still 'data dependent', so any weak data between now and the 15 June meeting will see the rate rise expectation pushed back to July...and then September...

It's important to keep in mind what the Fed is doing here. It's stage managing the stock market. It's massaging expectations in a coordinated manner so that, by the time the next rate rise comes around, the market will take it in its stride.

Then, the headlines will be all about how resilient the economy is. It will build on the new narrative that rising interest rates are good for the economy.

But there is the little issue of the strengthening US Dollar. Global interest rate divergence (meaning higher rates in the US and continued easy money in Europe and Japan) is not a positive global macroeconomic backdrop.

This divergence means the US Dollar will strengthen against the Yen and the Euro. It will also put pressure on the Chinese Yuan again, as China competes in the export market against Japanese and European goods.

From a macro perspective, a strengthening US Dollar is a headwind for the global economy. That's because it's the world's reserve currency. A strong US Dollar puts pressure on commodity prices and emerging markets. It represents a tightening of global liquidity.

So, as you can see from this dynamic, the world economy is trapped in no win situation. Higher rates in the US drains liquidity from the rest of the global economy and leads to a slowdown...which then leads to lower US interest rates and an increase in global liquidity and economic activity.

And around and around we go. So keep this in mind while the narrative of 'higher interest rates are good' grows stronger over the next few months.

Higher interest rates are indeed good. They are the only mechanism that will rid the economy of speculation and wasteful investment. Higher rates will cause short-term pain, but they will also increase long term productivity, which is the Holy Grail of sustainable economic growth.

But it just won't play out like that. Debt levels are too high all around the world to risk higher rates. The only option is to try to generate enough inflation so that nominal rates rise while real rates stay low. The real interest rate is the nominal rate minus inflation.

Right now, the market is buying the Fed's preferred narrative. That is, the US (and global) economy can handle higher rates. That's leading to higher stock prices and an unwinding of bets on gold in particular.

As someone who thinks gold is at the start of a new bull market, this is not too concerning. In fact, after such a strong run, a pullback is always healthy. In the same way that the hedge fund speculators are pouring back into oil (via the futures market), the same thing has happened with gold over the past few weeks.

But the prospect of an interest rate hike in the next month or so is now tempering some of that enthusiasm. According to Bloomberg:

"Last week, money managers who have been bullish since January reduced their wagers on a price rally by the most this year.

"The net-long position in gold futures and options fell 26 percent to 169,491 contracts in the week ended May 24, according to US Commodity Futures Trading Commission data released three days later."

Given this data is about one week old, the positioning in the futures market is probably even weaker than these numbers suggest.

But as I said, this is not necessarily a bad thing. There is always profit taking in markets. Corrections always follow rallies. You just don't want to see the correction go too deep.

In the case of the US Dollar gold price, it would be good to see it get support around US$1200 an ounce. Although it would have to fall as low as $1175 before I would start to worry about my bull market thesis. I have marked this level on the chart below: 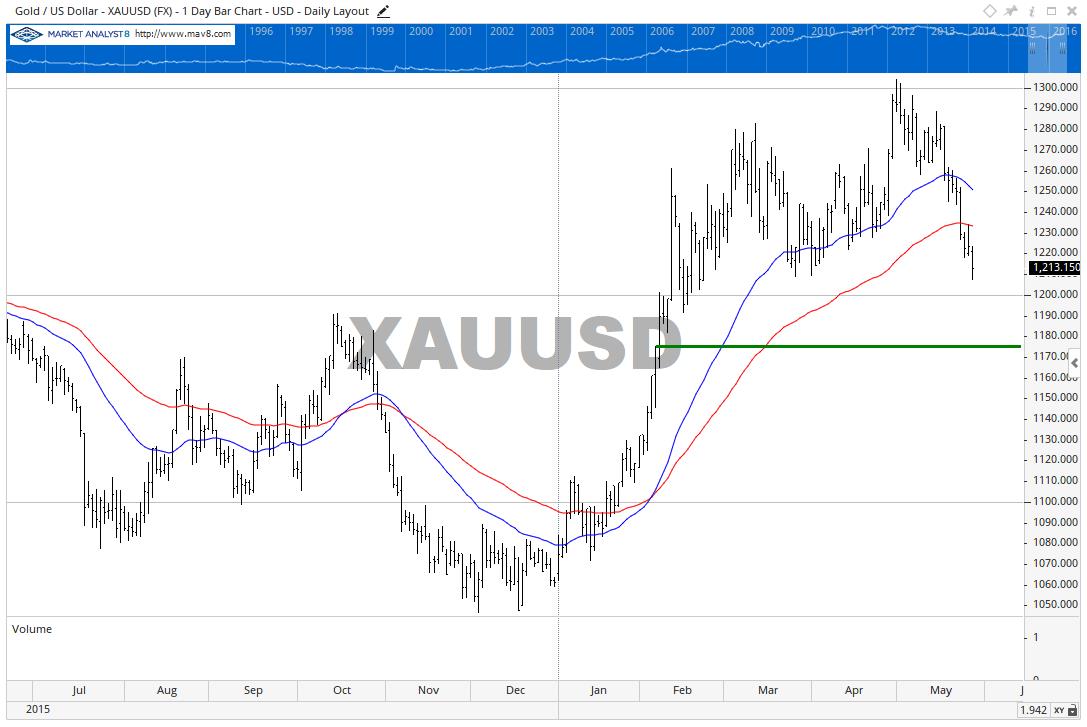 I guess it really depends on how much, and for how long, the market believes the US economy can really handle the prospect of rising interest rates.

We'll find out soon enough. As always, gold is a great barometer of financial market health, or at least the market's perception of it. If gold finds support soon enough, and starts rising again, it's telling you that higher rates in the US are not going to be good for the global economy.