END_OF_DOCUMENT_TOKEN_TO_BE_REPLACED

Ain't no mania like a gold mania...
FROM HERE to the top, gold priced in Dollars took 30 trading days in summer 2011, writes Adrian Ash at BullionVault.
Are we just 6 short weeks from another assault on $1900 per ounce and above?
Could be. The market's sure behaving like a US downgrade just met a Eurozone debt crisis and mass English riots.
This time it's China's Covid-19 crisis meeting sinking bond yields at the highest US and global equity prices in history.
30 trading days to a new all-time high gold price might prove plenty. 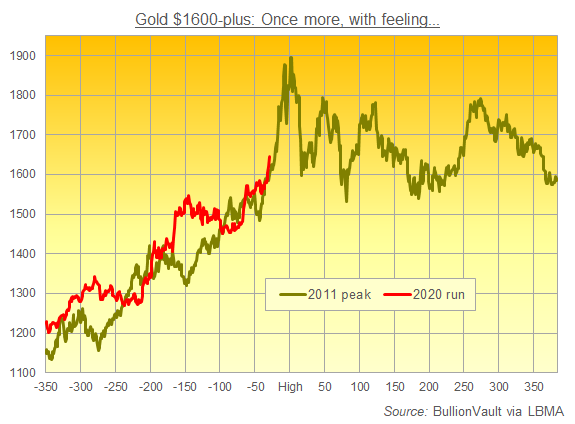 Hitting $1645 around 3pm in London this Friday, the price of gold has jumped to 7-year highs in US Dollar terms, rising at its second-fastest weekly pace of the last half-decade.
Thanks to the US Dollar rising on the forex markets, that's also seen gold set a record-breaking run of new all-time highs against the Euro. Eight of the last 10 trading days have seen gold print a new record at the London benchmark price auction.
How come? Gold prices tend to do well when other assets do badly. But gold does best of all when people lose faith in central bankers, and nowhere is losing faith in monetary policy-makers faster than Europe right now.
"Nobody trusts you," says Bloomberg, apparently quoting Germany's anti-migrant, anti-Euro AfD lawmaker Jörg Meuthen in a "tirade" against European Central Bank chief Christine Lagarde.
"The far-right Alternative for Germany representative was railing about negative interest rates," the news-wire goes on, "and while enduring bluster is par for the course for ECB presidents, the Feb. 6 encounter in the European Parliament also illustrated how politically charged that stimulus tool has become."
Japanese gold prices are also surging as the once mighty Yen finally sheds the myth of 'safe haven' status after decade-upon-decade of QE money-printing and sub-zero rate nonsense from the Bank of Japan.
For now, this spike in Yen gold – the highest since but still 10% below the all-time top of January 21, 1980 – is causing a flood of profit-taking by Japanese savers rushing to ditch their coins and small bars for the best price a dealer will pay.
Here at BullionVault, both US and UK customers are also taking profit in gold as a group, and why not? No one ever went broke taking a profit (well, not unless the cost of living then leapt so fast, or their other assets sank so badly, that the nominal gain was vaporized) and the UK gold price in British Pounds has only been higher once in history. Yet even with the price of gold in Euros setting that record run of new records, customers living in the 19-nation currency union continue to buy net-net overall.
The Eurozone also continues to lead new interest in precious metals, with the number of first-time BullionVault users rising over 8% so far in February from the region's past 12 months' average, while both the US and UK are running 11% below.
Maybe private-citizen gold buyers in the Eurozone know something that sellers in the UK, the US and Japan don't. Or something that they just won't accept just yet.
Professional investors, in contrast, increasingly agree that a little gold could go a long way. Inflows to gold-backed ETF trust funds have now totaled $3.5bn over the last month according to Bloomberg numbers. "Over the past 12 months," as brokerage INTL FCStone notes, "the funds added 355 tonnes, equivalent to 10% of the world's annual mining output."
Such heavy demand for gold in the form of large, securely-stored bars (the form of gold that matters to price) clearly isn't limited to ETF proxies either. Word is that trading volumes have leapt across the London market (the market that matters to price), extending the solid inflows to specialist vaults seen in 2019 and hitting near-record levels at some houses.
For our own part, volumes have risen 3.5-fold here at BullionVault vs. the prior 52-week average. Maybe things will calm down next week. Maybe they won't turn until the start of April.
What price gold by then?