END_OF_DOCUMENT_TOKEN_TO_BE_REPLACED

Want to a gold price forecast? Then you'd trust an expert, right...?

IT'S PLAIN common sense that when you need information or advice on something you're unfamiliar with, you consult with a professional, writes Jeff Clark at Casey Research.

That's what people do whether refinancing a home, choosing an insurance product, or fixing a broken heater. While professionals certainly have their own agendas, they still know more about their products or services than others, and can at least help them make more informed decisions.

Bank and brokerage analysts know their products, too. But when it comes to helping you make an informed decision about where the gold market is headed, they have, as Rick Rule is fond of saying, a record unblemished by success.

Every year major banks and brokerage houses provide their four-year forecasts for the Gold Price. The following chart documents the average price projection of 25 top analysts over the past seven years, many of whom specialize in the resource industry. I might suggest pushing away from your desk so that when your jaw drops it doesn't hit the keyboard. 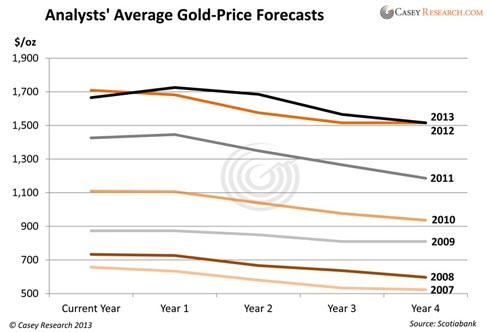 You can see that every year since 2007, bank and brokerage analysts have as a group predicted that gold would fall, sometimes dramatically, over the next four-year period.

Similarly, they predict this year that gold will fall from $1665 to $1515 by 2017. Even if they thought gold would move higher the first year, their best guess was that it was ultimately headed lower. So far they've been wrong every time.

For the most part, these are analysts who do nothing but study the resource markets all day long. It's their job. No one gets it right all the time, but this kind of track record is embarrassing.

The obvious lesson is for investors to ignore price predictions from the major banks and brokerage houses – they just don't get it. I'm sure most readers of Casey Research publications already know that.

However, there's a much bigger implication of this data that may not immediately come to mind...

Why would you – as a fund manager or institutional investor – buy a Gold Mining stock if your analysts told you the price of gold was going to fall?

If the price of the product a company sells is expected to decline over the next few years, would you buy the company's stock? Its earnings are almost certain to fall. As a manager of millions (or billions) of Dollars, you wouldn't buy any investment with this kind of outlook.

There's more. These same banks and brokerages have also been predicting the price of oil will rise (almost) every year. While they've occasionally been right about that, it means that margins for the gold producers would be expected to fall, since roughly 10% of their costs are related to fuel. So again...

Why would you as a fund manager or institutional investor buy a gold mining stock if your analysts told you profit margins were expected to fall?

It doesn't matter that analysts have been consistently wrong. What matters is that if the institutional world believes the gold price is likely decline and/or that margins are likely to fall, they're not going to stick their necks out and buy gold stocks. They could lose their bonuses or even their jobs if their analyst's predictions came true and they'd bet against them.

This could be the explanation for why hedge funds, institutional investors, and other large investors haven't entered this market en masse and could account for the disconnect between the price of gold and the trajectory of gold stocks.

We see the potential in gold mining equities here at Casey Research, as we believe the price of gold is going higher. But big investors with billions of Dollars to pour into an market don't. Their money, for the most part, is still on the sidelines.

This phenomenon leads us to predict that someday these institutional investors will enter this sector en masse. Once the facts sink in and the institutional world becomes convinced gold and silver prices will maintain a sustainable uptrend, they'll be much more attracted to the equities – and just as stubborn about changing their minds once they're on board.

Now, it's possible this group may have to be beat over the head by relentlessly rising precious-metals prices before they enter the industry. They'll have to believe that, say, gold hitting $1900 again isn't a temporary fluke but a sustainable uptrend. I don't know what price the metal would have to maintain or how long it would have to stay there before they jump on board, but given the above chart, I think it's safe to say they won't be the first to the party.

Whenever and however it happens, though, the stampede from institutional investors into this tiny industry will be sudden and dramatic, because they tend to have a herd mentality. No one wants to be left behind. Just like they don't want to risk buying something all their colleagues are ignoring now, they'll rush to own the popular and exciting investment when gold stocks have their day.

The consequence of this will result in dramatically higher stock prices. How high? Well, this group loves to use price models, and fair value for Newmont Mining (NEM), based on its reserves in the ground, would be about $200 per share (it's currently trading around $44). And that's at $1700 gold – as the spot price rises, the value of NEM would rise exponentially, or so you'd expect, since gold would be rising faster than costs, even when inflation kicks in.

That is why I'm excited about the producers. It's the first place the institutional world will turn when gold makes a sustained move higher. Come the day those investors believe gold is about to become part of the monetary system, that bonds are no longer a safe place for money, that inflation is about to get out of control, or whatever it might be that changes their paradigm, they'll flood into our little market and push share prices higher by an order of magnitude.

When this shift gets under way, Casey Research and those of its subscribers who follow its recommendations will already own the stocks that institutional investors will, I believe, be clamoring to buy. Maybe we should thank them now.