END_OF_DOCUMENT_TOKEN_TO_BE_REPLACED

If you think gold is just another commodity, you're not alone. Sadly...
SO WHEN is gold more than a commodity?
When it is recognized as the last safe haven in a volatile world, says Doug Casey's senior analyst Louis James in this interview with The Gold Report...
The Gold Report: You recently observed in your newsletter that gold has been acting more like a commodity, like pork bellies, than like a currency. That misclassification has discounted the value of precious metals, depressing the price. Why do you think that is?
Louis James: Commodities, as a group, tend to move together. We see it with copper and other industrial metals, and we see it in other commodities, including pork bellies. The commodities index is not just an average line. It actually is fairly representative of the sector as a whole. That matters right now because the trend for commodities is downward, plus the fundamentals are...scary.
China's slowdown is accelerating, for example. If gold were just another commodity used to make jewelry or fillings, it would be logical to lump it in with iron ore – and therefore be bearish. But it plays another role that is much more valuable. It is the currency of choice in an uncertain world. 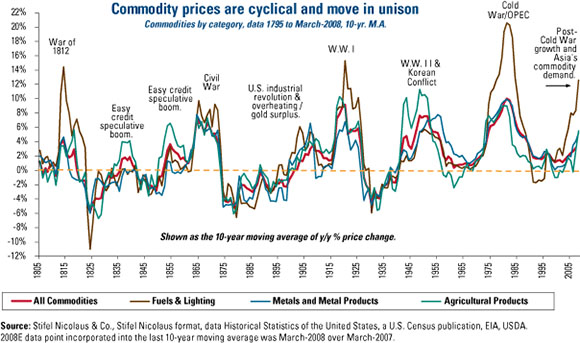