END_OF_DOCUMENT_TOKEN_TO_BE_REPLACED

And that's with oil itself looking decent too...

WITH ALL due caveats about the non-stellar gold Commitment of Traders data, I want to note a constructive situation in gold vs. oil, which is a key sector fundamental consideration, writes Gary Tanashian in his Notes from the Rabbit Hole.

Now, there is still a constructive situation in play for nominal crude oil, so take this post for perspective more than anything.

Pardon the charts, but I am going to start using these personally so that I can fully take into account the historical market aspects that go further back on a daily chart.

Gold in terms of US crude oil (Au/WTI) bottomed in December of 2016 as the sector bottomed that same month. The first positive signal was a rise above the 10-day exponential moving average. That is what Au/WTI did last week. Pullbacks will happen even if this is a successful bottoming process.

The relative downside volume into an oversold Relative Strength Index and even higher upside relative volume out of the oversold reading is interesting. 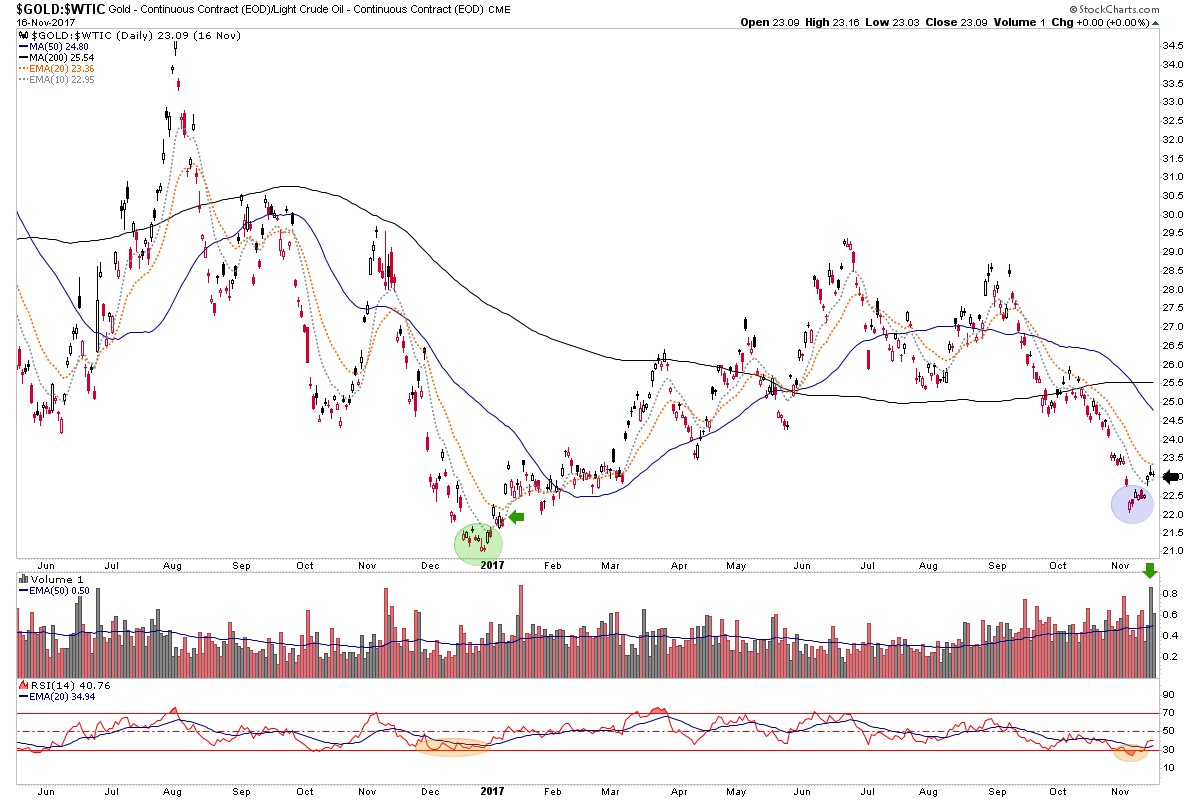 Here is a longer-term view showing that situation, which came in tandem with only a moderate rally in gold-mining stock index the HUI (shaded in the background) that failed, seemingly on schedule (to our indicators at the time) this past summer. 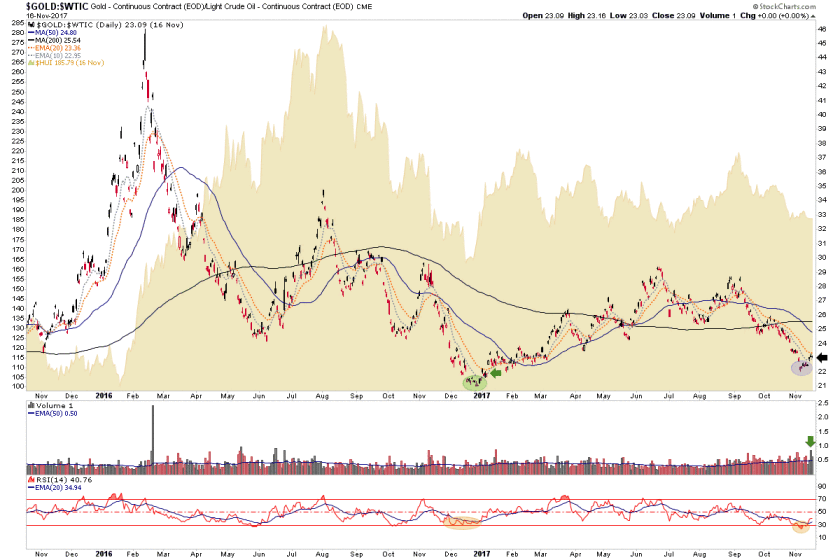 But this chart dials back to before the key January 2016 time frame when HUI put in a low that preceded the impulsive bull leg in the first half of 2016.

There is talk among certain technical analysis practitioners that fundamentals don't matter in this sector. I assure you, they do. The bottom in early 2016 came in tandem with a rapidly improving gold/oil sector fundamental. Other macro fundamentals soon followed and it was off on what may well one day prove to have been the first move to a new bull market in gold stocks.

But look at how the rally took place against a gold/oil ratio that had topped, reversed and dropped hard. If you recall silver was leading and a greater risk 'on' inflation trade (including commodities and stock markets) was getting a shot in the arm at that time. That is when inflation-fixated gold bugs tout and lead the sheep astray. We noted danger at the time with several posts

Gold/Oil was just one of several bearish markers developing. So if we are going to use fundamentals to warn of danger, we are also going to be aware of them when scouting bullish opportunity.

The charts above are only meant for perspective in looking at one indicator to see what would be needed to switch to a bullish orientation. Just as an up sector was vulnerable to a negative reversal in fundamentals, a down sector is a candidate to go up on a positive reversal in the fundamentals.

The largest planets have not come into play yet. Gold is drubbed vs. stocks, the economy is doing fine and by extension, so is public confidence. Add to that the still-flattening yield curve and the gold sector is not indicated to be ready yet.

Using gold vs. the stock market as an example however, you can see how this macro fundamental was very bearish across the board as the sector bottomed in January of 2016. But the Gold/Oil ratio had already turned up in December of 2015. This begs an ongoing view of several indicators on various time frames in an ongoing manner.