END_OF_DOCUMENT_TOKEN_TO_BE_REPLACED

WHILE we expected additional weakness in gold and gold stocks for some time, writes Jordan Roy-Byrne at TheDailyGold, we did not quite expect the kind of selling the sector experienced in the wake of Donald Trump's election victory.

This has created significant technical damage in the sector and has potentially thrown the 2016 bull off course.

Our first chart shows how and when this bull market went off course. Below we compare the current rebound in gold to some of those from the past. 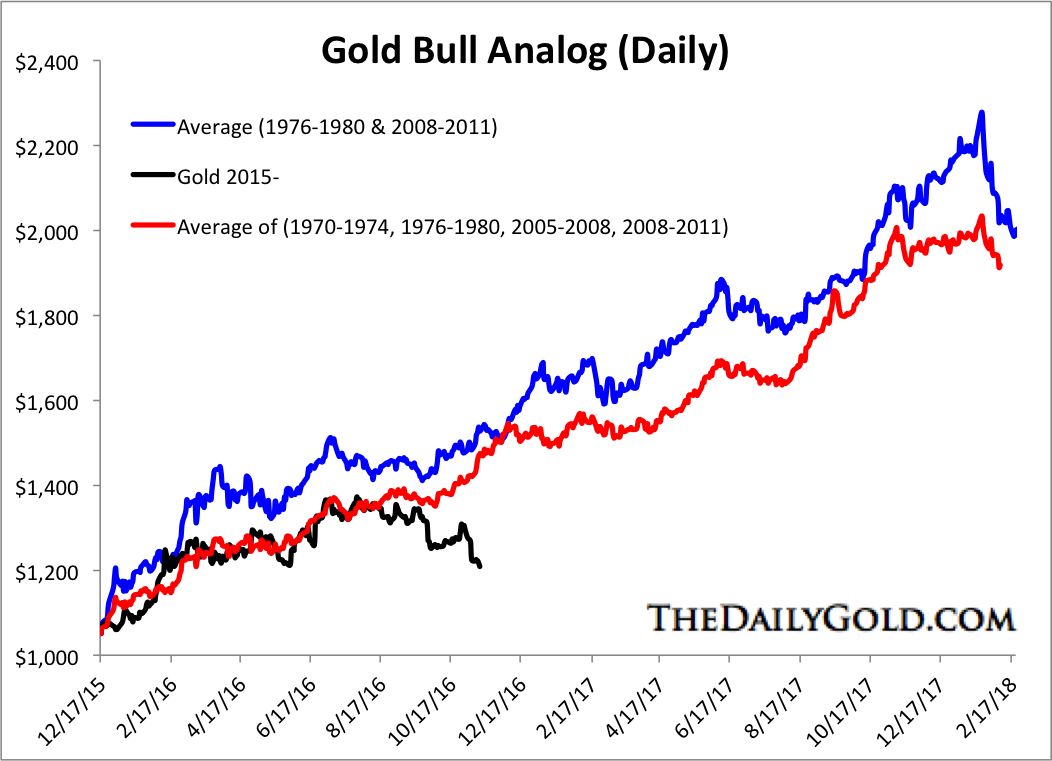 As you can see, the 2016 rebound was well on course until the second half of September. That is when, compared over time, historical bull markets pushed higher. Unfortunately, gold broke lower and has continued to trade lower. It has diverged from its bull market course.

Our next chart pertains to the bull market in gold mining stocks, and specifically to the HUI Gold Bugs Index. 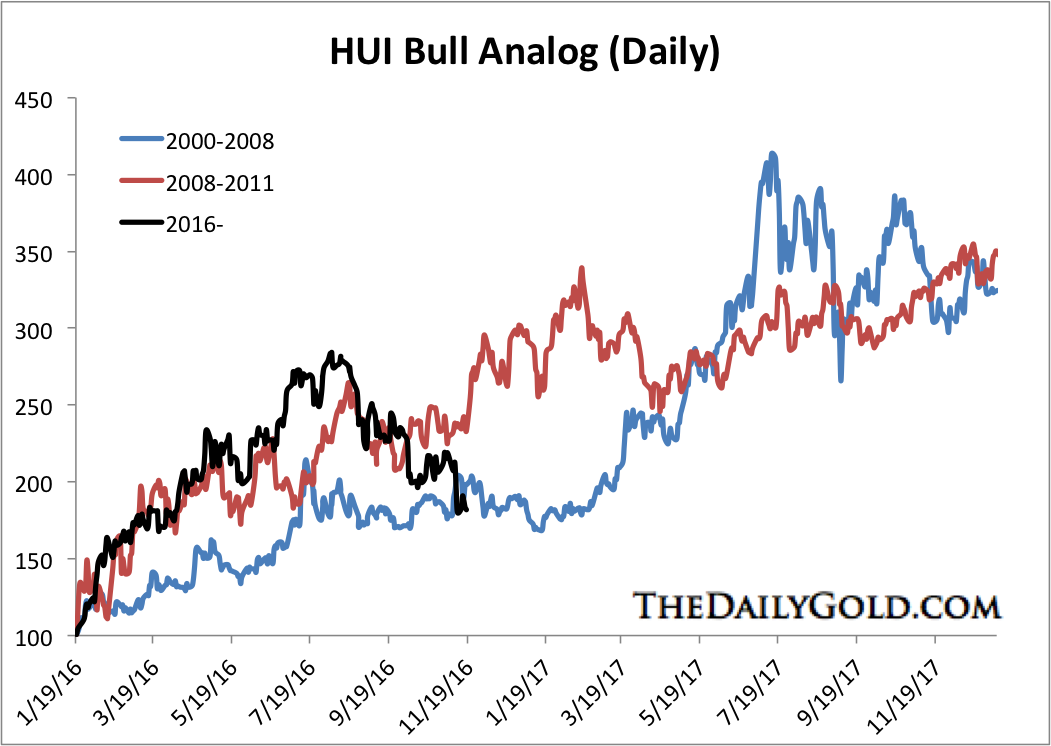 The chart shows that this needs to be an important low for the bull market to remain intact. While I expect a rebound very soon, I have some doubts that the low will hold. 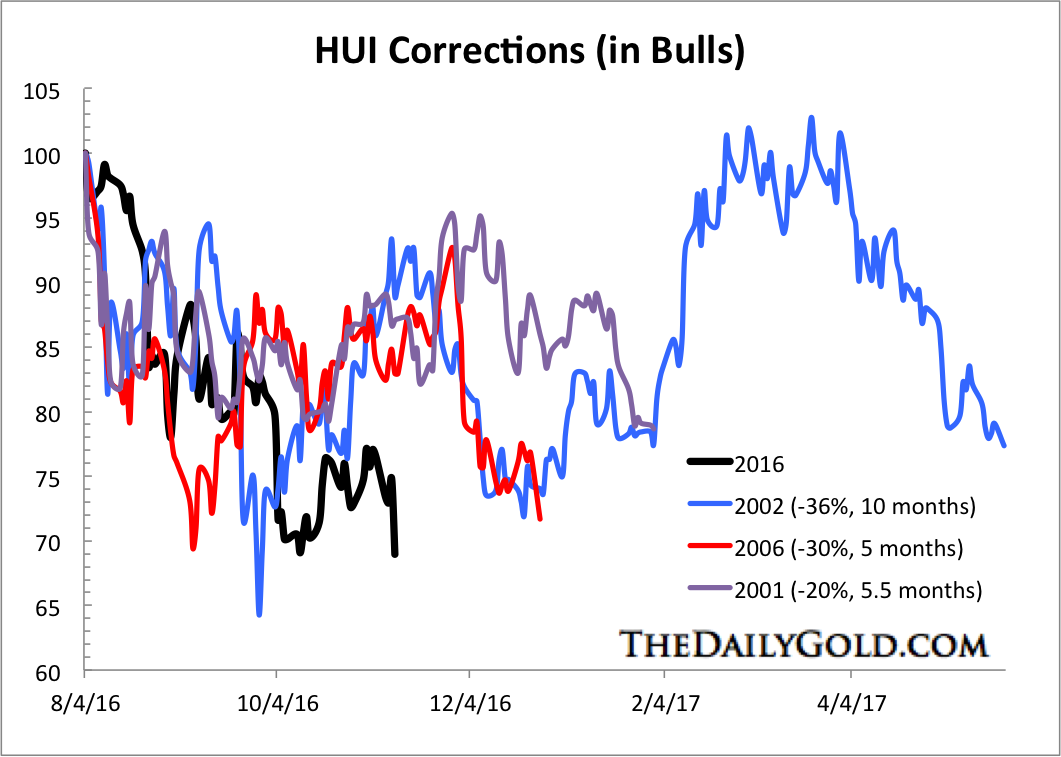 Both history and current price action argue that gold and gold stocks are at risk of a big decline if they lose the current lows. If gold loses $1200 per ounce then it could drop quickly to $1080 or even $1050, the major low.

The same can be said for the GDX index of gold miner stocks, which bounced from its 62% retracement and 80-week moving average at $20. Below I have sketched out how this bearish scenario could play out. 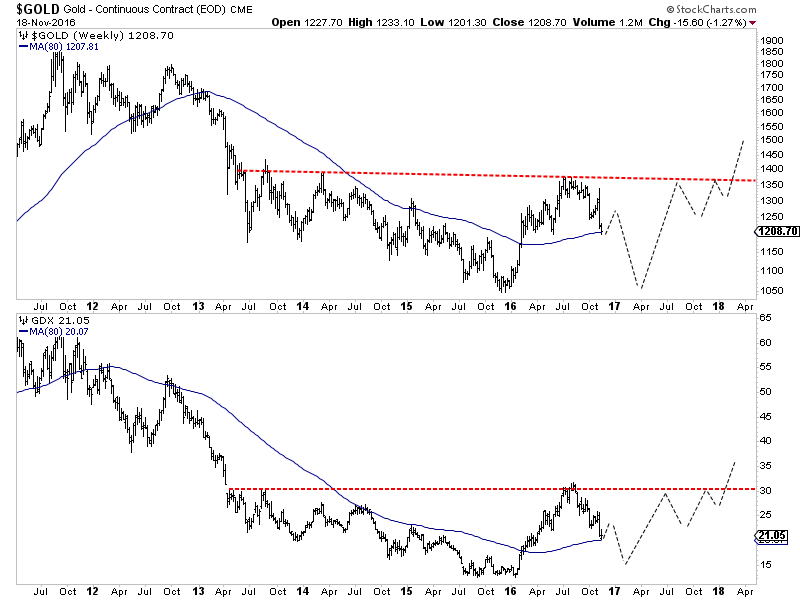 Note, this sketch is purely subjective and subject to change. But unless gold and gold stocks hold current levels and form an important low then the 2016 bull market has gone off course.

At present, the evidence favors the bearish scenario, which has the sector trading lower in the months ahead. We could chalk this up to a fundamental change (which I consider to be temporary) coupled with the potential for a spike in the US Dollar.

Investors are advised to de-risk their portfolios during the coming rebound and prepare for a better buying opportunity at the end of winter.