END_OF_DOCUMENT_TOKEN_TO_BE_REPLACED

This Friday's big data on US jobs looks critical to gold's short-term direction...

The SEESAW trading action in gold continues this week, writes Sumit Roy at Hard Assets Investor, as prices fluctuate just above and below $1400 per ounce.

Back when gold plummeted in April, we wrote that any potential bottoming process would be a long, drawn-out affair. We maintain that view. Yet it remains to be seen whether gold has bottomed in the low-$1300s or is merely consolidating before another leg lower.

We continue to watch Gold ETF holdings and physical demand in Asia for clues on where prices could be headed. In that regard, while gold exchange-traded funds have been net sellers of the metal since the week of Feb. 15, the pace of selling slowed significantly last week, with sales of only 115,000 troy ounces (3.5 tonnes). 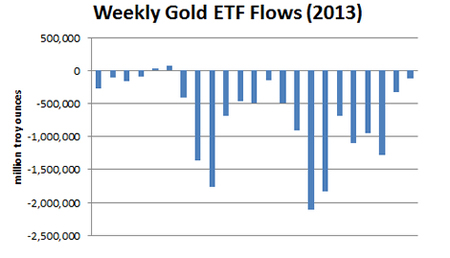 Stabilization in exchange-traded gold fund holdings bodes well for gold. If we have truly seen the worst of the selling pass, gold is likely to make another run for the $1485 and $1525 levels, which are the major resistance levels to watch.

What will also be telling is the reaction in gold to this Friday's non-farm payrolls report in the United States. Financial markets in general have seen an increase in volatility in recent weeks amid speculation that the Federal Reserve could end its quantitative-easing programs in the coming months amid the belief that the economic recovery has become self-sustaining.

Fed officials are particularly concerned with the labor market. Economists are expecting the Bureau of Labor Statistics to report that employers added 167,000 jobs in May, close to what we saw in April. The unemployment rate is expected to remain steady at 7.5%.

If the actual figures come in close to the consensus expectations or better, expectations of an end to QE are likely to rise. How the gold price responds to such news will be a major tell regarding where prices go from here.