END_OF_DOCUMENT_TOKEN_TO_BE_REPLACED

The moves in gold prices have been so vicious, investing now is a tough decision...

MANY INVESTORS are now wondering if the words "gold" and "opportunity" can coexist in the same sentence, says Michael Kosowan, an investment executive at Sprott Global Resource Investments, in this speech from Cambridge House's World Resource Investment Conference in Vancouver adapted for The Gold Report.

Watching gold prices these days has been an "exercise for the eyeballs" similar to watching a rubber ball bounce around a concrete room. At times the price moves unnaturally, in fits and starts, according to broad economic policy statements in the marketplace and seemingly harmless comments right out of the Fed chairman's office. How do we uncover opportunity amidst so much volatility in the marketplace?

Most readers will fall into three categories: those who want to know how gold stocks and the word opportunity can coexist in the same sentence; those who have been swayed or afraid to invest in gold and are wondering what to do with their current portfolio; and those who recognize that they can be a contrarian or a victim in these markets and believe that there may be a turn in the market that can lead to wealth.

The history of this sector shows that there have been critical times to invest to produce life-changing wealth. Not surprisingly, this has typically coincided with times when public sentiment has been at all-time lows. At times like these the media tends to highlight the risk while ignoring the returns.

Today's market is similar to a replay of a movie that we've all seen before. The low sentiment toward gold and gold stocks was also very prevalent in 1999, when I moved from the mining engineering side of the business to become a stock broker. At that time, like today, you were able to buy reality at a discount. The 1999 market gave rise to such success stories as Southwestern Resources Corp., International Uranium Corp. and AngloGold, all increasing tenfold or more.

Going back to the gold market in the 1970s, the price of gold moved up from $35 per ounce in 1970 to $200 per ounce by 1975. In the midst of that bull-run on gold, the price suffered a 50% retracement and moved back to $100 per ounce by August 1976 – this was a cyclical retracement in a secular bull market. It was painful, but not debilitating to the bull market thesis.

During this tumultuous time the media had its own part to play. In August 1976, Time magazine proclaimed that "gold lately has had about as much luster as a rusty tin can." Expectations were set very high on the initial run-up and the interim weakness was enough for the analysts of the time to discredit the entire gold thesis. Those swayed by the media were shaken out of that market and then missed the subsequent move from $100 per ounce in 1976 to $800 per ounce four years later. Time magazine was a very expensive subscription that year, to say the least. The investors who were swayed by the media missed astounding returns on gold as it moved through its bullish cycle.

So what do opportunities for gold look like now and how do I find them? A mine is a depleting asset; every day that goes by while it is in production reduces the size of the business.

The recent landslide at the Kennecott Utah Copper Bingham Canyon mine, located not too far from Salt Lake City, Utah, highlights this issue. This is the second biggest copper mine in the US and one of the oldest – it started production in 1906. This mine as 107 years old and has been producing 200,000 tons of copper, 300,000 ounces gold, 3 million ounces silver and 13,000 tons of molybdenum per year – truly massive!

Although it is very impressive to be pumping out this kind of tonnage at its age, Bingham Canyon is telling us legacy assets are becoming strained and long of tooth. They are dwindling, which spells supply disruptions, and therein lies the opportunity.

The costs associated with keeping mines in production are increasing and supply disruptions to such important assets are becoming more common place. The estimate for Bingham is that it may very well be off-line for the next two years.

Our dwindling legacy mines are in urgent need of being replaced by new discoveries. So, where are they?

This chart depicts the 3 million-ounce or more discoveries over the last 21 years. 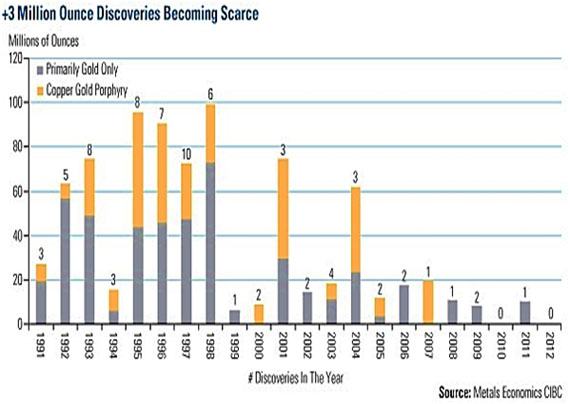 The chart dramatically shows that this industry has seen an acute lack of significant discoveries in the recent past. Meanwhile, the industry is chugging through more than 80 Moz gold, 680 Moz silver, 15 million tonnes of copper and 90 million pounds of uranium annually. These depleted reserves need replenishment. And, in today's challenging economic environment, the quality needs to be higher.

Discoveries made in the mid- to late 1990s are largely due to the increased financing activity that took place 10 years earlier. Funding comes 10 years ahead of discovery activity. The poor discovery rate of today is relative to the poor market conditions and lack of funding we suffered in early 2000s.

Since that time, funding has ramped up, notably between 2005 and 2007. If this cycle holds true – let's call it the circadian rhythm of mining – then we may be directly in front of a renewed exploration and discovery cycle.

Here is a checklist for success with four factors:

The first factor is balance sheets. They can be intimidating for some investors, but they don't need to be. Investors should look for whether the company has sufficient cash to cover its projected expenses for the next two years. Two years is important because finance continues to be tough in this market. If the capital raise is significant it will spell out heavy dilution and water down future positive price moves – if there are any. Small financings at these levels could be a warning of desperation as the company fights to cover incidental costs while adding no benefit to the exploration venture. These small raises could be going toward covering working capital deficits and salaries – basically keeping the lights on. Be wary of both large and small financings.

You don't want a junior miner that has debt or high property payments in the near term. A company's cash balance needs to be sufficient to take it to its next technical milestone. Companies add value by answering unanswered questions. How far will the company get to answering that critical question regarding its exploration program before needing to raise capital yet again?

The second factor is management. When it comes to junior mining stocks, management is key – and that can't be stressed enough. Good management can make a lesser property viable. Make sure the people running the junior miner have a ton of experience, ideally directly related to the same commodity involved in the project at hand.

In an ideal world, management and/or the company's geologists will have made significant discoveries in the past, bringing some of those deposits to production. Experienced management will also know how to navigate legal, political and financial issues and, especially important in many North American jurisdictions, the permitting process. Also, look for companies where the key people have plenty of "skin in the game," ensuring their shares and stock options align their interests with those of shareholders.

The third factor is low capital costs. Capital cost is simply the total cost to put the mine into production. This is commonly found in the feasibility studies for the project.

The current challenging financial scene has made it difficult to access capital. This has been a barrier for the big, high-tonnage deposits. Recent high profile projects that have gone way over budget have poisoned the well of large-scale finance. While it was not that long ago that companies were being rewarded for big projects, this is not the case today and financiers are being far more selective.

The final factor is high margins. High grade equals high margin. And in this market, that's crucial. The Holy Grail for many of the juniors is to be acquired by a senior. They must show that they have the high grade to offer or the takeover won't happen. From my perspective the seniors have developed an inward-looking focus. They are attempting to develop low-grade ounces in a rising cost environment. Their older mines are getting deeper and more costly. This is known in the industry as "extend and pretend." Production expansion is coming at a much higher price; at some point this will prove a losing battle. Going forward, high-return deposits will be key. The seniors have not spent money on exploration, leaving them with only one place to turn...the juniors.

These criteria form the "must haves" when choosing gold shares that will yield the best returns. Now more than ever they are crucial to the success of your investment. These criteria represent the tip of the iceberg. This is really just the beginning of your homework assignment in making your stock selection. Understand that the performance of this sector is really dependent on only a handful of stocks. The outstanding returns of the few derive benefit to the many.

The Pareto Principle is firmly at work here – 80% of the gain is derived from 20% of the stocks. Finding that 20% is key.

There is real opportunity in this market to buy the all-stars of this industry at a discount. This is truly a wonderful set of circumstances for speculators – names like Ross Beaty, Bob Quartermain, Lukas Lundin, Robert Friedland – proven veterans of the mining sector who are now able to get their hands on some of the best projects they've ever seen.

Take advantage of this wonderfully miserable market we find ourselves in and find those fantastic opportunities that are out there.