END_OF_DOCUMENT_TOKEN_TO_BE_REPLACED

GOLD and gold mining stocks were setting up for a rebound until the market suddenly priced in tighter policy from the Federal Reserve, writes Jordan Roy-Byrne at TheDailyGold.

Both nominal and real yields surged and that pushed an already oversold sector below key support. Gold lost support in the mid $1100s while gold stocks (GDX) lost a critical support level. While the sector is oversold and likely to rebound as 2017 begins, the primary trend remains lower.

Our first chart plots gold and the real yield on the 5-year TIP security. The US Treasury provides daily data and it gives us a look at day to day changes in real yields. The real 5-year tips year yield has risen to an 11-month high. Stronger real yields hurt gold's desirability as an investment. This is why gold and gold stocks have sold off. 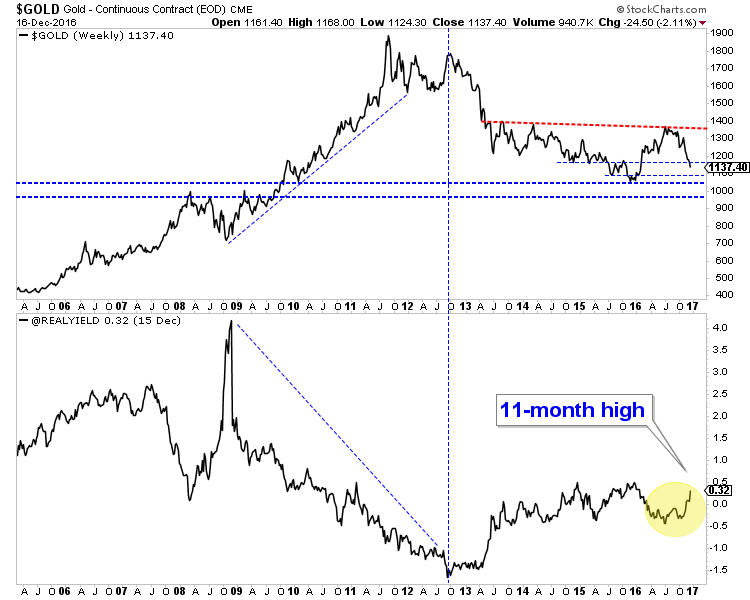 The other scenario is gold immediately dumps down to $1085-$1095 per ounce before beginning a sustained rebound.

Turning to the gold miner stocks, we see that the GDX index broke below a key level at the end of last week. It had been holding above $20, which was a confluence of strong support. The weekly candle shows a clear breakdown below that support. 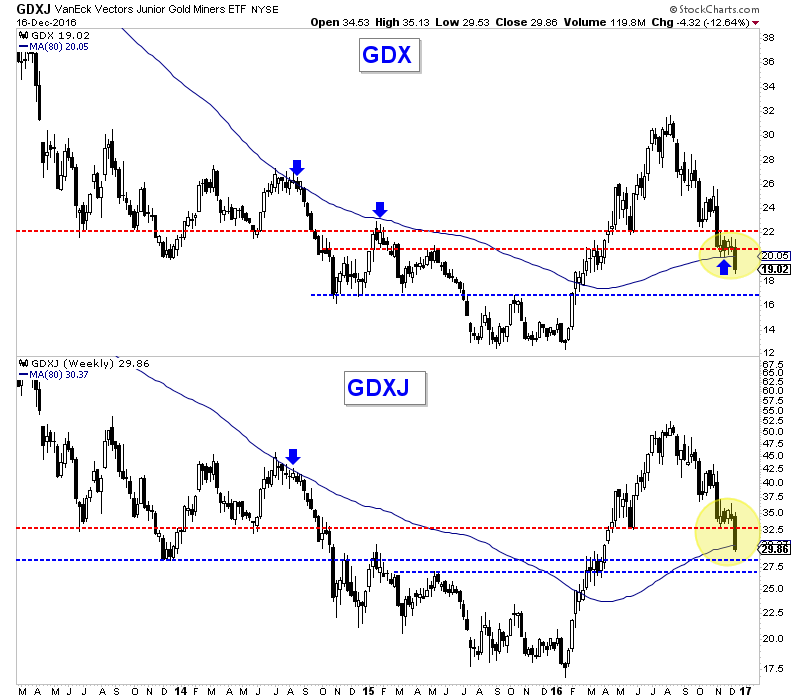 GDX could snapback to the breakdown point near $20 which would setup a decline to support at $17. The other scenario is it plunges to $17 this week. GDXJ lost support at $32.50 and dumped 12% last week. Its next strong support is around $27.

Although gold and gold stocks are very oversold and sentiment indicators are bullish, the breakdown in price signals that more selling could occur before the sector rebounds. A big rally in fold is more likely to begin from $1095-$1095 per ounce than from $1120 per ounce.

The gold stocks could also test lower levels before a sizeable rebound begins. We had expected a rebound but the sector brokedown. We were wrong. However, our bearish big picture view remains on target. We reiterate that we do not want to buy investment positions until we see sub $1100 gold coupled with an extreme oversold condition and bearish sentiment.