END_OF_DOCUMENT_TOKEN_TO_BE_REPLACED

And still not badly 'oversold' on this weekly measure...

The BEAR market in the gold miners has been one for the record books but it is not over yet, says Jordan Roy-Byrne at TheDailyGold.

Last week we noted that precious metals were on the cusp of making new lows while the US Dollar index was very close to another key breakout. This scenario remains well in play and would certainly affect the gold mining sector, which over the past two weeks failed to rebound or build on any strength.

Below is a daily candle chart that shows GDXJ (large juniors) and GDX (largest miners). Before Friday both markets had essentially traded nowhere or sideways over the past 10 days. That could be enough time to "work off" the oversold condition that developed after the miners declined 16% and 18% over the previous eight days.

Friday's sharp decline reduced the miners chances of testing the 50-day moving average and could be the start of the next leg lower. Any strength next week could be capped near $19.50 in GDXJ and $14.00 in GDX. A daily close below $18.00 in GDXJ and $13.00 in GDX could quickly lead to lower levels. 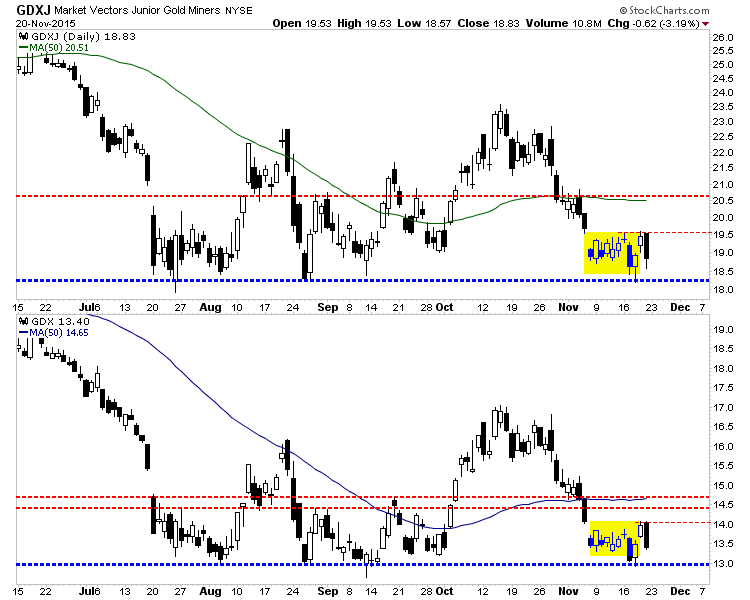 GDX and GDXJ have formed small hammers on the weekly candle charts but volume and size (of the reversal) are lacking.

The miners appear to be biding time before an inevitable break to new lows. Unless they can close above the highs of this week or form a huge reversal next week, the prognosis for the weeks ahead remains bearish.

Finally, note that previous declines lasted nine to ten weeks. While this decline may not last as long, it could continue for several more weeks as miners are not yet extremely oversold on a weekly basis. 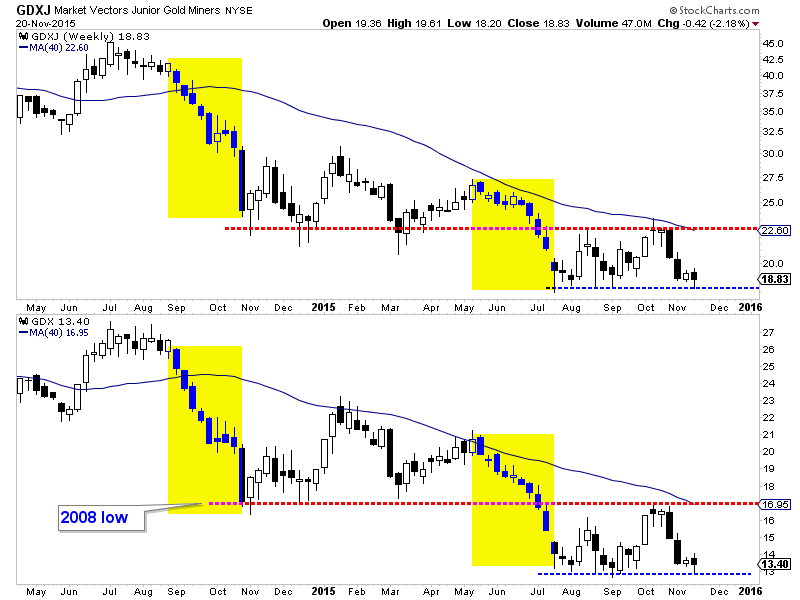 The path of least resistance for gold shares (and the rest of the sector) continues to be lower. The miners, after 10 days of sideways action face an increased risk of a breakdown to new lows. While the entire sector is oversold and bounces can happen, note that severe selloffs and steep losses are born out of already oversold conditions.

As gold-mining stock bulls we do not want to be buyers until we see a sector that becomes extremely oversold and is trading near strong support levels (i.e $970-$1000 gold bullion) amid extreme bearish sentiment.