END_OF_DOCUMENT_TOKEN_TO_BE_REPLACED

But free cash flow in mining stocks deserves a look...
PHYSICAL GOLD has continued to catch a bid, trading above $1740 an ounce on a host of head-spinning economic news, from millions more Americans filing jobless claims to record money-printing to negative oil prices, writes Frank Holmes at US Global Investors.
The national average price for a gallon of gasoline fell further to $1.78 last week, down more than $1 a gallon from a year ago. But the lowest price in the country may belong to a Shell station in Francis Creek, Wisconsin, which was reportedly selling (giving away?) gas for $0.75 per gallon, according to GasBuddy's Patrick De Haan.
The seriousness of the coronavirus-fueled recession is reflected in April's preliminary health reading of America's manufacturing and service sector industries. The composite purchasing manager's index (PMI) plunged to 27.4, a new series low, as companies were shuttered and millions of non-essential workers were furloughed or laid off. A staggering 26.4 million people, or about 15% of the US workforce, have now lost their jobs since mid-March due to the Great Lockdown.
"The scale of the fall in the PMI adds to signs that the second quarter will see an historically dramatic contraction of the economy, and will add to worries about the ultimate cost of the fight against the pandemic," writes Chris Williamson, chief business economist at IHS Markit, which produces the monthly business survey.
Some US states are slowly starting to reopen their economies, and I'm eager to see what effect this might have on May's PMI. If it turns up, it could indicate the bottom is behind us.
The most aggressive of any state right now appears to be Georgia, whose governor, Brian Kemp, has come under fire by even President Donald Trump for allowing high-risk businesses such as gyms and hair salons to open their doors to customers. The southern state processed more unemployment claims in the last week of March than it did in all of 2019, according to CityLab.
Bloomberg reports that in the month of March, central banks in Group of Seven countries purchased some $1.4 trillion in financial assets in an effort to soften the blow of the pandemic. That's nearly five times the previous monthly record set in April 2009, when the world was dealing with what was then the worst crisis since the Great Depression.
Meanwhile, world governments have unleashed a combined $8 trillion in fiscal stimulus, with more on the way. In one week alone, the US House of Representatives approved, and the president signed, an additional $464 billion in relief for small businesses that have been impacted by the economic downturn, as well as funding for hospitals and testing.
For fiscal year 2020, the federal budget deficit could hit an incredible $3.7 trillion, the Congressional Budget Office (CBO) said on Friday. That would be its largest size as a share of the US economy since World War II. 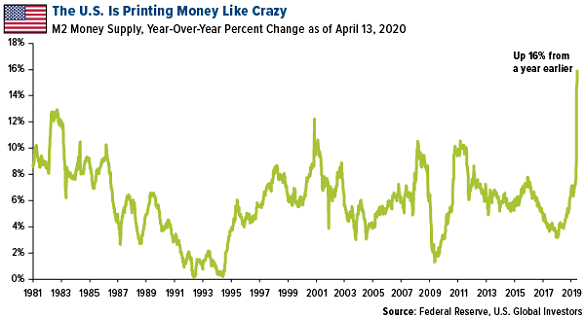 Right now the US is printing money on a scale we've never seen. The amount of M2 money supply – which includes cash and "near money" such as savings deposits, money market securities and mutual funds – has raced up 16% compared to the same time a year ago. That may not seem like much, until you put it in an historical context and see just how significant the ramp-up really is.
All of this is constructive for the price of gold, which I believe is on a path to exceed its previous record of $1,900 an ounce. Analysts at Bank of America now see the precious metal touching $3,000 within the next 18 months.
And if that happens, just wait and see what gold mining companies do.
Shares of senior producers, as measured by the FTSE Gold Mines Index, are up close to 20% for the year, but for the 10-year period they still trail the metal's spot price performance. I believe this makes the group an attractive investment opportunity, especially now that gold mining is one of the few industries generating strong revenues and free cash flow on higher metal prices. 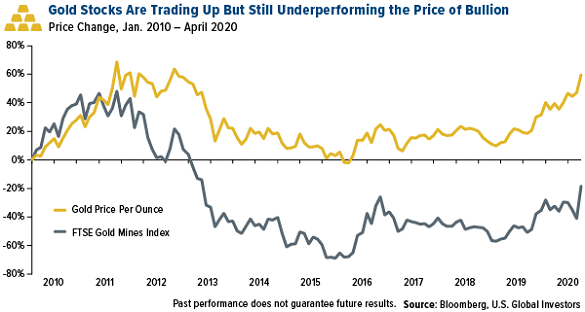 Think about it: With more than 26 million people applying for unemployment benefits in the past month and a half, many S&P 500 stocks' revenue will dry up. Gold stocks should shine, by comparison, and I predict we'll see new buyers who focus on companies with free cash flow, one of the best metrics of profitability.
Take a look below. What you see are the most profitable precious metal mining stocks with a market cap of $1 billion or more, based on free cash flow yield (FCFY). This is a metric that basically tells you how much cash the business is generating after taxes relative to how much it costs to operate. The lower the number, the less cash it's making. The higher the number, the more cash it's making.
Included in this list are highly liquid, mega-cap producers like Barrick (3.9% FCFY) and Newmont (also 3.9%), smaller firms such as the Russian Highland Gold Mining (5.4%) and everything in between. One royalty company, Wheaton Precious Metals (3.8%), is also represented.
Topping the list is intermediate miner Alacer Gold, which released positive initial drill results last week at its Copper Hill project in Turkey. The Denver-based producer reported "impressive grades" at the site, with the copper close to the surface and "very low" in contaminates.
Something I ought to point out is that the data above is as of December 31, as companies have not yet reported for the first quarter of 2020. For comparison's sake, the S&P500's average FCFY for the same period was 5.6%. Even before the market tanked and gold began to surge, a few of the metal producers were already outperforming S&P500 stocks in cash generation.
Keep your eyes on mining stock earnings in the coming days and weeks. Time will tell, but I expect to see that many generated healthy levels of free cash flow in the March quarter, which should help attract investors who up until this point may have been sitting on the sidelines.