END_OF_DOCUMENT_TOKEN_TO_BE_REPLACED

It doesn't need your help...

UNPOPULAR it may be, but I cannot alter the truth as I see it, writes Gary Tanashian in his Notes from the Rabbit Hole.

Marketing is fine, but never at the expense of truth, as with much financial media/analysis (with little disclaimers tucked in below the fold).

In my opinion, a sizeable component of the gold 'market' is actually marketing; to the fearful, to the naive, to the biased, to the politically rigid.

Also in my opinion, Twitter is a breeding ground made for brief promos, sloganeering and bias reinforcement.

Pop up mini-screed behind us, let's take another view of the macro from the perspective of a pretty rock that is heavy and does nothing, other than provide an anchor to long-term value in a bubble era where value is temporarily an outmoded concept.

You don't root for gold. You play the macro and keep an eye on gold, because when it is time to be bullish on gold, it will mean that others things are falling apart, to a moderate or epic degree.

You don't root for gold or cheer its price. You certainly do not hump gold miner stocks as part of the cyclical reflationary/inflation trades. You keep an eye on gold and when they are ready to leverage gold's standing within a macro coming apart – even if temporarily – gold stocks.

Well it looks like the screed extended a bit. I actually just want to pop up some gold ratio charts (using GLD and various ETFs) to gauge the macro. So here they are, giving us an update of the gold-centric macro.

Gold/SPX (GLD/SPY)
Doing exactly as expected after the big spike in anxiety in the markets. A pullback was all but in the bag as we projected the same for the VIX and other extreme sentiment indicators.

An indicator like this does not change trend by smashing above a major trend marker (SMA 200, green). It changes trend by grinding away at it and eventually turning it. Still, this may well have been the first impulsive move toward that end. 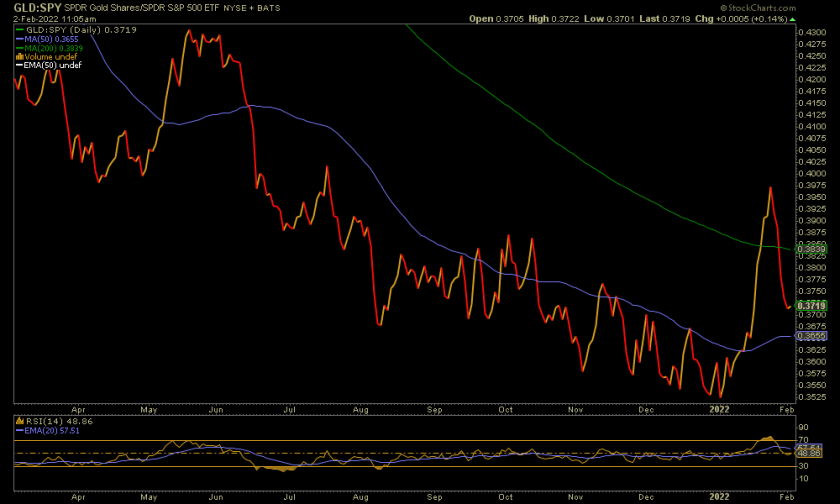 This ratio is better, in that it has already been grinding since Q4 2021. The grind is in service to a potential new uptrend in gold vs. global stock markets (on balance and ex-US). This, despite the big pullback that we had noted (in NFTRH) would come if Gold/SPX pulled back as expected. 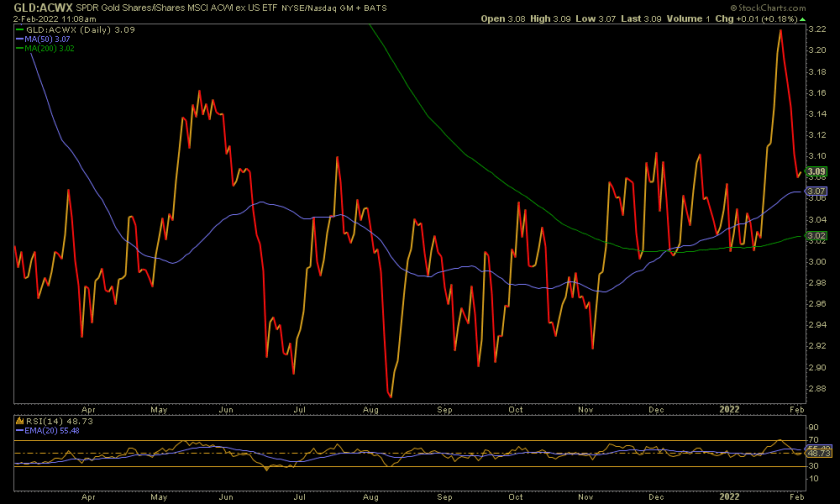 GLD/DBC (Gold/Commodities)
It's nowhere, as it has been since the inflation trades began in 2020. Well, it is somewhere; in a pure downtrend. Commodities are still bullish nominally and in relation to gold. 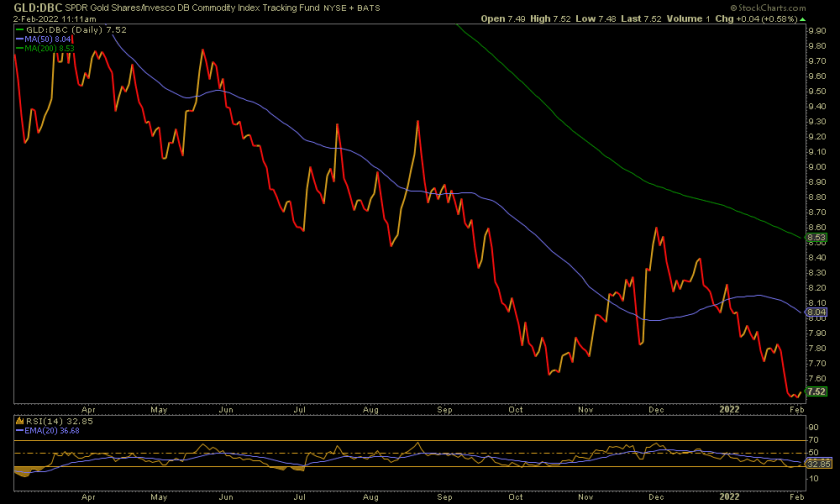 The monthly risk vs. reward view of Gold/Commodities is almost completely fixed after having gotten bent way out of shape in 2020. This is where biased gold boosters don't get it. 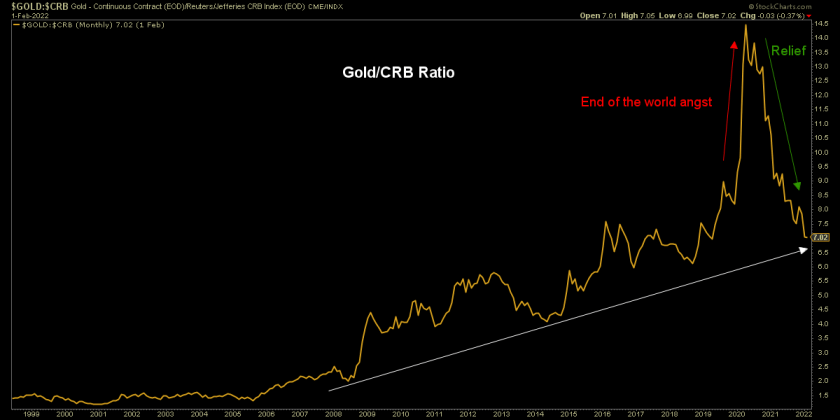 GLD/RINF (Gold/Inflation Expectations)
If inflation expectations continue to fade as they have since November, a chart of gold vs. those expectations will instruct that time is winding down for inflation traders.

The interesting point here is that time will have run out for a lot of gold bugs too, since a majority of them are inflationists, seeing gold as part of the wider anti-USD inflation trades. Gold can be an inflation trade under certain circumstances, but it has not (yet) been on this inflationary cycle that has temporarily benefited the economy. 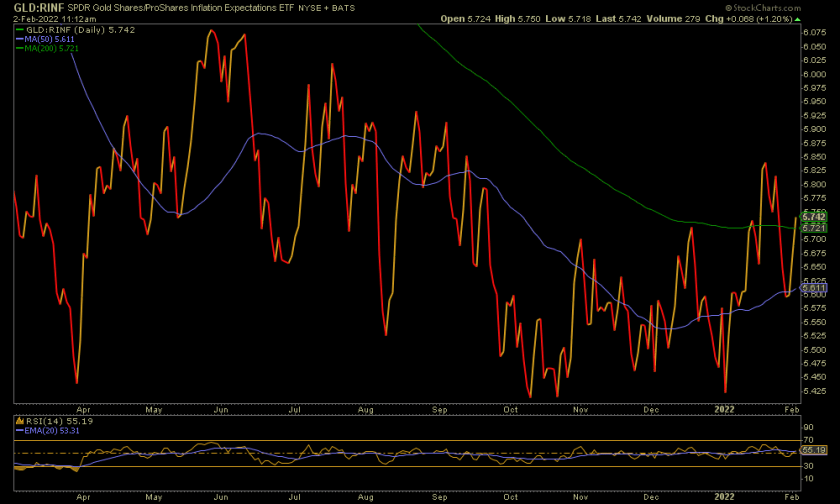 If this chart changes trend, you'll see the positive risk/reward for gold vs. commodities per the charts above result in actual market performance (with CRB's driver, crude oil being a potential wild card in the short-term due to supply/demand, war tensions and manipulation e.g. OPEC price schemes, etc. drivers besides inflation).

But eventually oil would come in line too if the macro swings counter-cyclical.

GLD/CPER (Gold/Copper)
Don't sleep on this one. A prime counter-cyclical metal vs. a prime cyclical one. It is as yet neutral, as it has been for a year. 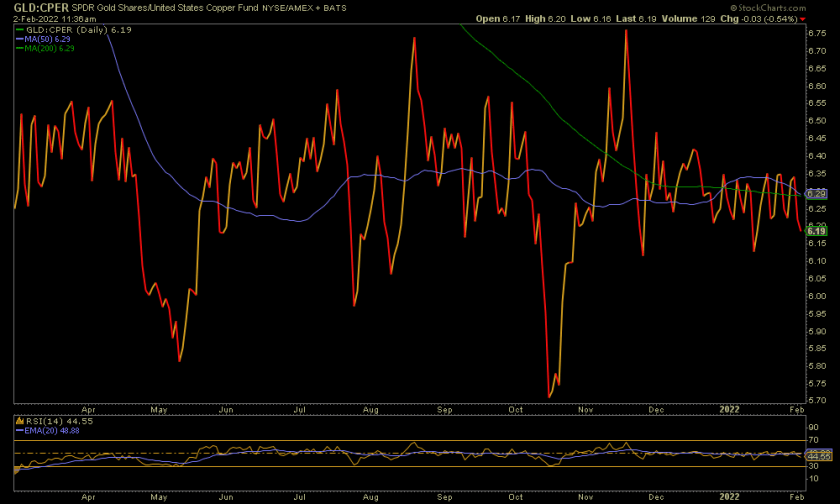 Flipping it over to its Copper/Gold version, expanding to a monthly big picture view and adding a couple of cyclical markets in the bottom panel, you can probably see that what Cu/Au does here at the current decision point will likely have impact on the macro one way (inflationary cyclical) or the other (dis-inflationary counter-cyclical).

I was recently trolled in comments to this article as published elsewhere, with the troll insisting that I had shown no empirical evidence of anything with my charts, including the one below.

Well, if five previous decision points – the last two of which failed at around the current juncture – are not enough empirical evidence, well then deniers are going on hope and a prayer, not logic.

The logical thing to do here is to at least be cautious that what few expected in Q1 2020 (NFTRH fully expected forward inflation) and what everyone now knows is a current macro truth (cyclical inflation), could at least be at interim risk depending upon what counter-cyclical gold does in relation to cycle reflation/inflation markets, like the good Doctor Copper. 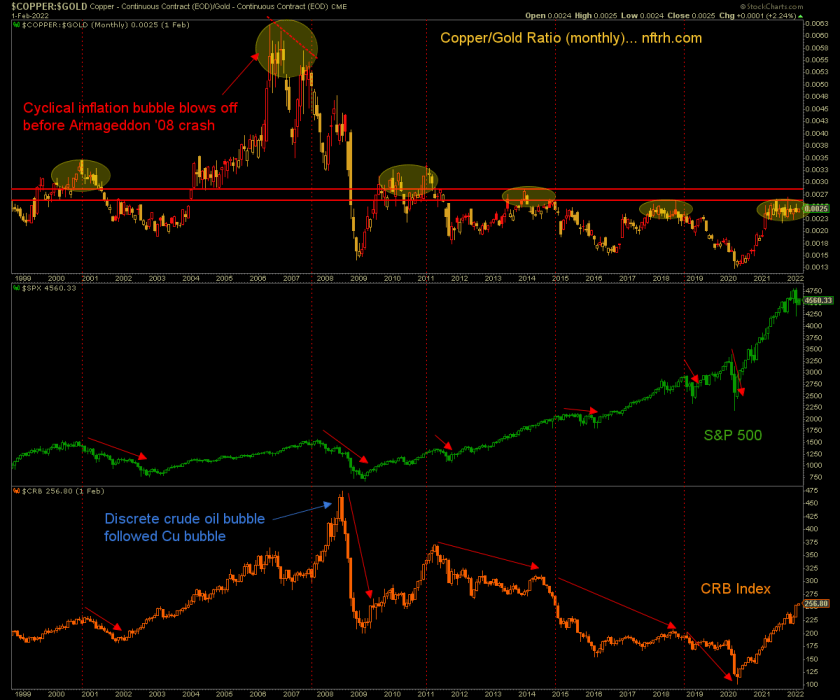 Some investors are actually members of teams. It's not just Team Golden Pom-Pom either. The herds seek reinforcement above all else because in that reinforcement from like-minded participants, is comfort, even camaraderie. A sense of self-validation.

In short, it's Psych 101 rolled into one big herd of man, machine and an army of quants.

It's much less comfortable to go by the path that is ahead than staying on the beaten one, beaten by a lumbering herd though it is. Gold's relationships to other markets are showing us the path ahead. But few are ready for it.

Timing is always a consideration. I make no claims to be anything approaching a swami, a guru, or a seer of grand things. I only make the claim of being a financial caveman using his tools. Tools that have worked through all the boom/bust cycles over the last 21 years.

Gold's ratios are an important tool in the box. As with other indicators (tools) we use, it takes diligence and psychological profile committed not to falling in love with any particular indicator, view or ideology. It takes ongoing work, perspective and understanding of time frames.

Otherwise, how could I be both bullish risk 'on' markets as I am now (VIX has already dropped a majority of the way to the caution zone) and cautious, at best, on them later? Markets are not easy, folks. But they can be made logical when viewed the right way.