END_OF_DOCUMENT_TOKEN_TO_BE_REPLACED

But over the same period, the S&P 500 Index has been in the red – the first time in nearly a decade that stocks have been negative for the year through the beginning of May.

The yellow metal is doing the one thing for which many investors have it in their portfolio – namely, it's trading inversely to the market. This highlights its longstanding role as an attractive diversifier and store of value. 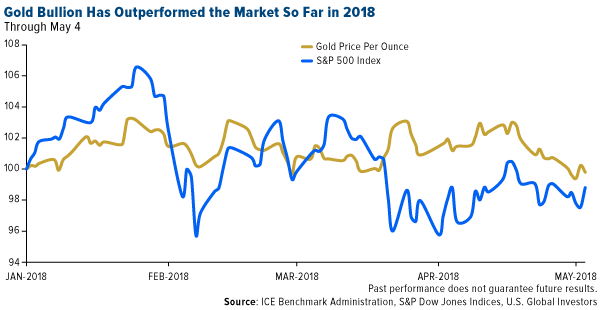 Gold has been under pressure from a strengthening US Dollar, and May has historically delivered lower prices. As I've pointed out before, this makes it an ideal entry point in anticipation of a late summer rally before Diwali and the Indian wedding season, during which gifts of gold jewelry are considered auspicious. Demand in China for the remainder of the year also looks promising.

However, this followed a monumental fourth quarter 2017, when gold demand in the world's second-largest consumer was 189.6 metric tons – an all-time record – so a decline was expected.

Looking ahead, it's estimated that India will have a "normal" monsoon season this summer. This is good news for gold's Love Trade. A third of India's gold demand comes from rural farmers, whose crop revenues depend on the rains from a healthy monsoon. When the subcontinent experiences a drought, as it did in 2014 and 2015, gold consumption suffers.

The India Meteorological Department (IMD) reports that its forecasts suggest "maximum probability for normal monsoon rainfall" and "low probability for deficient rainfall during the season."

In China, the world's largest importer of gold, jewelry demand rose 7% in the first quarter to 187.7 tonnes, a three-year high. According to the WGC, Chinese retailers are working on improving the customer experience, providing consumers with "a more holistic retail solution". The industry is expecting a strong 2018 after a relatively subdued 2017.

Except for a weak February, demand so far this year has been particularly strong, with monthly withdrawals from the Shanghai Gold Exchange (SGE) above the two-year average of 170 metric tons. April represented the third straight month of rising demand. Withdrawals were 28% higher than in the same month in 2017, according to veteran precious metals commentator Lawrie Williams at Sharps Pixley. 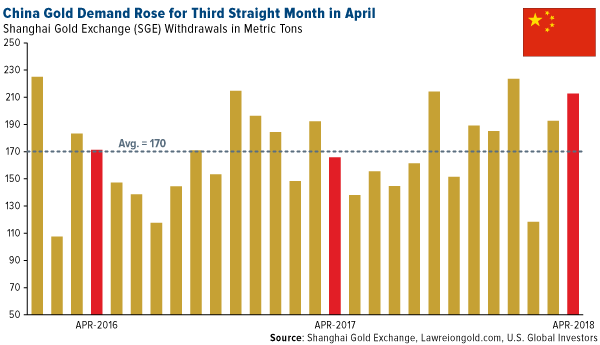 Williams writes that fears of a potential trade war with the US could be driving Chinese investors into safe haven assets, including gold bars and coins. Indeed, the WGC reports that bullion demand in the first quarter finished at 78 tonnes, above the three- and five-year averages.

I believe this all bodes well for the Love Trade going forward, meaning it might be an opportune time for investors to consider increasing their exposure to gold and gold mining stocks. As always, I recommend a 10% weighting, with 5% in bars, coins and jewelry, and 5% in high-quality gold stocks, mutual funds and ETFs.