END_OF_DOCUMENT_TOKEN_TO_BE_REPLACED

Tracking the movement of money through the markets...

Over in America the S&P 500 fell by 1.2%. The Financial Times said markets fell on 'renewed worries over the outlook for the Eurozone.' But who knows if that's really the case? Stocks had an epic January. Some profit taking was in order.

From here, the market is an inflation story more than an earnings story. Granted, earnings will matter. But if we're headed back to 6,000 on the S&P ASX/200, it can only happen if money comes out of one asset class and pours into another. The liquidity shift is the key.

It's a lot easier to see and measure this shift in US markets. For example, if you look at the 100 largest exchange traded funds (ETFs) by market cap/assets under management, you'll find that there are 17 bond ETFs with over $145 billion in assets. These are ETFs that are long corporate, municipal, and government debt. There are four short and leveraged-short ETFs as well with $20.4 billion in assets.

Negative real interest rates – the financial repression which hurts savers but allows the government to run and finance deficits – will, at some point, drive investors out of the perceived safety of bonds and into the hunt for capital gains. After all, if you're not making any money and still taking a lot of risk, then you might as well be in an asset class where you can actually beat inflation.

Is that point now? Well, that's harder to measure in Australia. ETF money flows make it easy in the US. In Australia, you have to look at the market internals. Since sector funds and ETFs aren't as popular with retail investors here, you need to look at individual stocks that can be viewed as a proxy for 'safety' and 'fixed income'. You'd look for them to go down.

But if money is being re-allocated from 'safety' and towards 'risk', something needs to go up too. The trouble is, there are a lot of red numbers at the 'risk' end of the market today. The small cap stocks at the fringe of the market are leading the way today. But the way is down.

Part of that is a unique feature of the Australian share market. So many of the small cap stocks are resource stocks. And no matter what stocks as an asset class are doing, small cap resource stocks are still having a tough time of it. That tough time is related to the confusion over the outlook for commodity prices, plus consistently high capital costs with the strong Australian Dollar.

We don't have to settle the argument today. In fact, we'll go away and look at the market internals for evidence that a great migration is taking place among fund managers. In the meantime, we'd like to repeat the point that the simpler explanation for all of this is to look at John Exter's liquidity pyramid. If you haven't seen it before, have a look below. 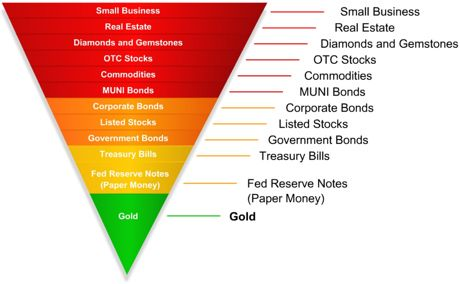 In Exter's model of the financial world, liquidity moves from less liquid assets to more liquid assets (and more direct claims on tangible wealth) as investors become aware of monetary debasement. People move to real money and real assets. But here's where it gets interesting.

In liquidity terms, there isn't much doubt that government bonds are as easy to buy and sell as stocks. But at this point, the liquidity advantage is not huge. The interesting question is which asset represents a more direct claim on real wealth?

Maybe it's a rhetorical point. But perspective does matter. The conventional point of view is that rising stocks are the sign of a new bull market. They're also a sign that the world is safe enough for risk-taking again. This is the explanation you'll get from the people who sell stocks.

The Exter worldview explains rising stocks as a sign that the monetary crisis has reached a new stage. Liquidity has fled sufficiently far 'down' the pyramid that governments have had to respond with extraordinarily low interest rates to keep debt and credit markets values from collapsing. Finally, this interest rate policy has triggered another response from investors.

We'll pick up this argument again tomorrow. It's one thing for investors to move out of bond ETFs and into index-tracking stock ETFs. It's another thing altogether for the 30-year bull market in bonds to blow up. That would be more than just interesting. It would be a financial disaster.