END_OF_DOCUMENT_TOKEN_TO_BE_REPLACED

YOU MIGHT think private households piled into gold during March due to the fiasco of Cyprus's banking bail-out, writes Adrian Ash at BullionVault.

Reading 53.3 in March, the index – which measures the balance of gold buyers and sellers on BullionVault, the world-leading precious metals exchange online – fell from 54.4 in February. 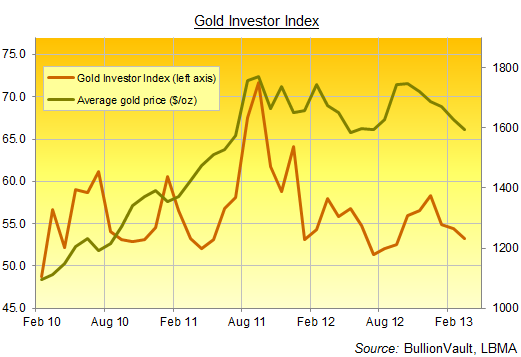 Fact is, events in Cyprus electrified interest in gold mid-month. That runs contrary to the recent trend, when gold investing had lost some of its urgency.

So while the bulk of savers continue to trust the banks and government, a growing number think such complacency unwise. Cyprus provides a stark reminder of the credit risks from which physical bullion is free.

The fiasco in Cyprus brought geopolitics and the need for risk diversification to the fore. Both are reasons why BullionVault last month added Singapore gold dealing and storage to its existing markets in New York, London and Zurich.

Switzerland remains the most popular location, with BullionVault users choosing to hold 75% of their physical gold property there according to the company's online Daily Audit.