END_OF_DOCUMENT_TOKEN_TO_BE_REPLACED

SINCE April's plunge in gold prices, the fastest drop in 30 years, writes Adrian Ash at BullionVault, the surge in demand from Western households has been met much faster than amongst Asian investors.

The 15% crash unleashed demand for physical gold worldwide. Would-be buyers in the Far East are still facing shortages and high local premiums. But household demand for gold bullion in Europe and North America has eased back almost as fast as it appeared. A fall in our Gold Investor Index was only to be expected. 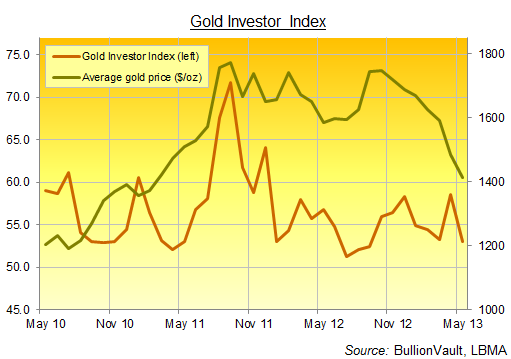 What does the Gold Investor Index show? BullionVault is the largest online provider of physical gold ownership to Western households. It lets people buy and sell physical gold, as they choose, live over the internet in open competition. The index takes the number of net buyers, meaning those users who added to their gold holdings over the last month, and subtracts the number of net sellers.

As we explain in this article for the London Bullion Market Association's quarterly Alchemist magazine, that figure – the balance of net buyers over net sellers – is then measured as a proportion of everyone who already owned gold at the start of the month. The index level signaling no change is 50.0, meaning a perfect balance of buyers and sellers, with sentiment amongst self-directed private investors neutral overall.

So the May 2013 reading of 53.0, although down 9.6% from April's 16-month high, still shows retail investor sentiment remaining positive towards gold. That's despite the uptick in both interest rates and the stock market. BullionVault's data show that a growing number of people are adding gold to their savings.

But while sentiment is positive, Western households remained net sellers of gold overall. That extends the pattern from April, with some larger investors tactically reducing the size of their position while the total number of gold owners continues to grow. All told, gold holdings on BullionVault were reduced by 1.1%, down to 32.4 tonnes held in specialist storage in London, New York, Zurich and Singapore.

So it's clear that a number of long-term holders are choosing to take a step back for now, reducing their investment in gold but keeping an eye on what is to come. If the perception of crisis recedes further, this may well continue. Coupled with fresh buying by new investors, however, the deeper trend may be away from fewer heavily concentrated holdings, towards wider gold ownership as a core financial hedge.