END_OF_DOCUMENT_TOKEN_TO_BE_REPLACED

If only a fraction of investible cash in the economy moved into gold, it would be a game changer...

YOU MAY think I'm out of touch with the precious metals markets to even broach the subject of a mania today. But I think the table is being set now for a huge move into silver and Gold Investment, writes Jeff Clark, senior precious metals analyst at Casey Research.

There are, however, very valid reasons to reasonably expect a mania in our sector. For one thing, manias have occurred many times before, but the main issue is that a mania in gold and Gold Mining stocks is the likely result of the absolute balloon in government debt, deficit spending, and money printing. Saying all that profligacy will go away without inflationary consequences seems naïve or foolish. Inflation may not attract investors to gold and silver as much as force them to it.

Now, one could make the argument that any rush into silver and Gold Investment will be muted if no one has any savings, especially given that demographers say a quarter of the developed world will soon be retired. But even if individuals are wiped out, the world's money supply isn't getting any smaller, and all that cash has to go somewhere.

I wanted to look at cash levels among various investor groups to get a feel for what's out there, as well as how money supply compares to our industry. Data from some institutional investors are hard to come by, but below is a sliver of information about available cash levels. I compared the cash and short-term investments of S&P 500 corporations, along with M1 money supply, to gosilver and Gold ETFs, coins, and equities. While the picture might be what you'd expect, the contrast is still rather striking. 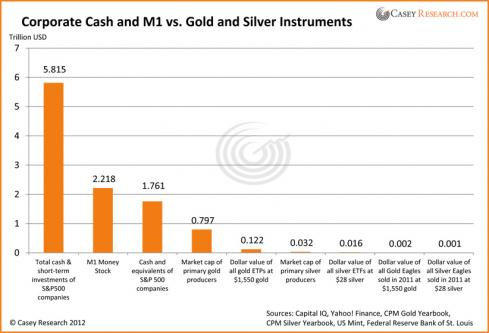 Naturally, not all this money or even a big chunk of it will be used to buy GLD, Barrick, or American Eagles, but it's clear that if any significant fraction of the cash sloshing around the economy were to be used to Buy Gold, it would have a major impact on the Gold Price – which would trigger the mania I fully expect. Let's take a quick look at what kind of impact our sector could experience if just a small amount of available funds were devoted to various forms of silver or Gold Investment.

It's striking, when you really stop to think about just how big the impact could be if some significant fraction of the larger financial world started chasing the small niche market that is gold. Such cash inflows will send our industry to the moon.

In the meantime, keeping our eye on the big-picture forces that have yet to play out is the plan to follow. Sooner or later, though, I'm convinced the catalysts will kick in that will pull/push/drag/compel/force the mainstream into our sector. I suggest beating them to it.

And when the mania arrives, we'll all wonder why anyone doubted it in the first place.