END_OF_DOCUMENT_TOKEN_TO_BE_REPLACED

Demand to buy gold falls harder than selling...
GOLD INVESTMENT demand has sunk to pre-pandemic levels among private investors, writes Adrian Ash at online market-leader BullionVault.
And no wonder, because while the action isn't yet bearish, it has become very boring, and although selling has retreated as prices have dropped, we haven't seen any meaningful bargain hunting to date.
Net of customer selling in fact, gold demand at BullionVault – the 24/7 precious-metals exchange now caring for $3.5 billion of client bullion – sank in March to just 24 kilos, worth less than $1.4 million.
Equal to only 4.0% of the prior 12-month average inflow, that was the weakest net investment demand by weight since January 2020.
The start of the Covid Crisis last March saw gold demand set a new monthly record of 2.0 tonnes at BullionVault, worth $102.7m.
So it was, in other words, always going to be hard for precious metals to repeat 2020's record investment inflows. Here in spring '21 however, the rush to bet on a global economic boom post-Covid is making it tougher still. 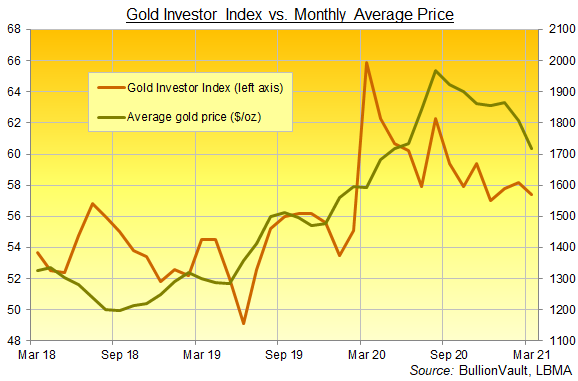 Back to March, and while the number of gold sellers fell 25.9% last month to the fewest since December, the number of people choosing to buy gold using BullionVault retreated 16.3% from February's 3-month high.
Together that put the Gold Investor Index – a unique measure of behaviour in the largest single pool of physical bullion investors – down 0.8 points to read 57.4 in March.
The weakest reading since November, that would however have marked the highest Gold Investor Index since Donald Trump won the White House in late 2016 if it weren't for the Covid Crisis surge starting March 2020. But again, any real impetus is lacking in the wake of last year's record highs.
Gold prices fell in March for the 6th of the last 7 months, losing almost 5.0% across the month and setting the lowest monthly average since May last year at $1718 per ounce, down $250 from August's record high.
Customers who made their first gold investment amid 2020's crisis are now leading the liquidation, accounting for 27.2% of sellers across last month as the price continues to slip and disappoint.
Even so, March's small net inflow at BullionVault saw total client gold holdings – all securely stored and insured inside specialist vaults in each client's choice of London, New York, Singapore, Toronto or Zurich – edge higher to a new record above 46.5 tonnes now worth $2.5bn. 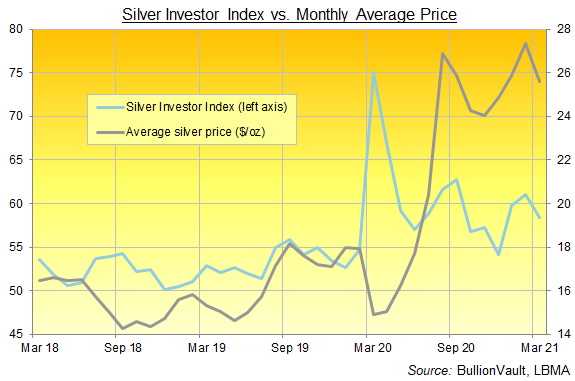 Silver prices fell harder than gold in March, down 10.1% across the month and setting the lowest month-average since December at $25.60 per ounce, down by $1.75 from February's 8-year high.
That discount drew strong net demand for the grey metal however, with silver holdings at BullionVault growing another 1.4% to a new record 1,182 tonnes.
The number of silver buyers fell by one-third from February's 11-month record, down by 32.4% as the number of sellers almost halved, down 44.6% from what was also the 2nd highest figure in BullionVault's history.
Together that put the Silver Investor Index at 58.4, down 2.6 points from February's 5-month high.
As per our public Daily Audit of client holdings and formal bar lists, platinum investment at BullionVault meanwhile grew 2.6% to 1.8 tonnes last month, reversing half of the winter's earlier 0.2-tonne outflow, made when the industrial precious-metal hit the highest prices since 2014.
In terms of new interest meantime, the number of new customers using BullionVault to buy gold, silver or platinum for the first time fell 39.5% in March from February's count and 67.4% from the record count of new users in March 2020. But it was still 35.5% ahead of the 5-year average, led by strength in the UK and United States.
Precious metals investment is hardly a wipe-out, in other words, but it is plainly weak in comparison to the strongest period of modern times. Gold in particular – because it lacks much industrial use – is likely to stay sidelined for as long as risk assets keep surging in anticipation of the economy re-opening, struggling to compete for attention against equities, junk bonds, emerging markets, commodities, crypto, NFTs and no end of other super soaraway nonsense.
That means it could be missing from many more portfolios by the time the crisis being seeded by today's massive pro-cyclical monetary and fiscal stimulus arrives.
Attachments: