END_OF_DOCUMENT_TOKEN_TO_BE_REPLACED

And that from the man who's cut his giant fund's allocation from 15% to 1% gold...
AFTER TWELVE consecutive years of increases in the gold price, anyone investing in gold may have expected some kind of market correction, writes Paul Amery at Hard Asset Investors in an article first published by IndexUniverse.eu.
But the speed and extent of the metal's spring sell-off still took many people by surprise. And 2013 has been a traumatic period for the whole commodity tracker market, the lion's share of whose investing assets is in gold.
During the six months, exchange-traded gold products lost more than 20% of their assets under management: ETP holders redeemed $19 billion of gold trackers in the second quarter, following $9 billion of sales in the first quarter.
And while commodity ETPs have seen a fall in assets before, most notably during the financial crisis of 2008, when the prices of many raw materials collapsed, gold had historically held up well in comparison. This year, things changed.
According to ETF Securities, which specialises in providing commodity trackers to investors, the about-turn in gold prices was signalled by a rise in US real interest rates that began late last year.

"We've seen inflation expectations in the US fall and nominal interest rates rise," the firm's head of research, Nick Brooks, told IndexUniverse.eu.
"As a result, real interest rates have shown quite an aggressive change in direction since October 2012. Unsurprisingly, that's also coincided with a rise in the Dollar. Tactically, this is possibly the worst environment for gold you could imagine."

ETF Securities has mapped the change in real interest rates in the chart below, which we have reproduced with the firm's permission. The gold price (in yellow, recorded on the left scale) is shown together with US 10 year real interest rates, as derived from the market for inflation-protected treasuries (in red, inverted, on the right scale).
Real US interest rates, which had spent most of the time in negative territory since late 2011, switched back to positive in the second quarter, reflecting a drop in long-term inflation expectations and a rise in ten year bond yields. 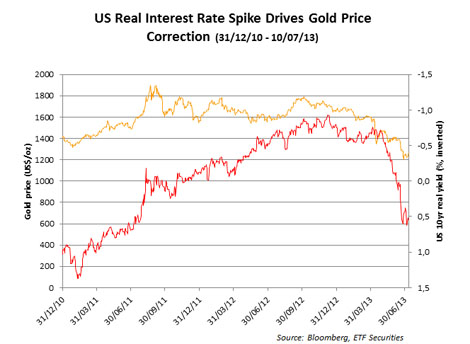 Reflecting the sudden turn-around in market sentiment, gold exchange-traded product investors withdrew their money at the fastest rate since the market for bullion trackers started over a decade ago. At the peak of the withdrawals, two tumultuous days in April saw a 13 percent, $200 price crash in the yellow metal.
Market observers put the scale and speed of the selling down to the exit of leveraged, hedge fund investors, particularly from US-listed gold ETFs.
"Around 90 percent of the selling in April was in North American ETPs, notably State Street's SPDR Gold ETF (NYSE Arca: GLD)," said ETF Securities' Brooks, "whereas these ETPs have around a 60 percent global market share. There's a heavy hedge fund presence in GLD and the sudden exit of leveraged long investors may have been behind the sharp gold price sell-off we saw on April 12 and 15."
Recent price volatility has cooled the former bullishness surrounding gold investing and served to make many investors reassess the size of their precious metal holdings, said MJ Lytle, chief development officer at ETP provider Source.

"Very few investors have taken gold out of their portfolios altogether," Lytle told IndexUniverse.eu, "but many have brought their holdings back to core positions, whereas they previously were overweight in the metal."

Some funds investing in gold have made more dramatic reductions in their gold holdings. Charles Morris, London-based head of absolute return at HSBC Asset Management – according to ETP traders, historically one of the biggest European buyers in gold trackers – told IndexUniverse.eu that he had reduced his fund's weighting in gold substantially from a peak of 15% in 2011.

"We've been reducing the weighting steadily over the last two years," said Morris. "Our final cut was in February and we're now down to just over 1%."

Gold's first-half fall has caused market commentators to reexamine the sources of supply and demand for the precious metal.

"The big question for everyone now is where gold goes in the next three to six months," said Source's Lytle. "People still have conviction that gold provides a good hedge for their portfolios, and there's been a lot of physical buying by Indian and Chinese jewellery manufacturers, but people are waiting to see if this is sufficient to stabilise the market and to provide an upwards movement in prices."

Those looking for a reason to buy may take some comfort from a change in the composition of gold ETP holders, said ETF Securities' Brooks, since the recent downdraft may have forced recent, more speculative buyers out of the market.

"Total holdings of gold ETPs are now back at mid-2010 levels," said Brooks. "Over the last couple of years gold had become a hot asset, attracting hedge funds and more tactical and less specialist players. Many of these investors may now have been cleared out."

And measures of negative sentiment, which often act as a a contrarian indicator, also provide encouragement for gold investing bulls, Brooks added.

"Short positions in gold, expressed via the futures market, are near all-time highs. A lot of the bearish views on gold investment have already been expressed."

Longer-term, however, said Brooks, gold investors will be focussing on the same key macroeconomic variable that has been behind recent price movements: inflation-adjusted interest rates.

"If US inflation expectations start to pick up again, gold could do better," Brooks told IndexUniverse.eu. "Conversely, if it looks as though investors have overestimated US growth prospects and nominal bond yields start to come down again, that would also be supportive of the gold price."
"Combined with the amount of negative sentiment out there, I think we're getting close to a bottom. We may not have hit it, but we may not be far off."

According to HSBC's Morris, gold may not yet have reached truly cheap levels, but that those looking to invest longer-term could do worse than buy at the prevailing price.

"We compare gold with other long-term, value-oriented metrics such as inflation, other commodity or housing prices," Morris told IndexUniverse.eu. "On that basis we get a sense of when the gold price is behind events, as it was in 1999, and when it's ahead of events, as it was in 2011."

"We're still about 10% above fair value," says Morris, "which we think is around $1100 an ounce, whereas gold would be cheap under $1000. $800 an ounce would take us back to equivalent levels of cheapness to 1999," said Morris.
"But there's no guarantee that we'll get back to those lower levels," Morris added. "On a ten-year view, if you buy gold now, it's not stupid."