END_OF_DOCUMENT_TOKEN_TO_BE_REPLACED

The GOLD MINING sector is doing what it should do amid fading inflation, writes Gary Tanashian in his Notes from the Rabbit Hole.

If you have tuned out inflationist gold bugs since mid-2020 you are now in position to capitalize, unlike scores of inflation bugs who'd already bought (and likely sold into tax loss season, 2022).

Readers of nftrh.com have seen this space write many times how gold is not about inflation. At least not primarily.

That compounds with the gold miners, which leverage gold's standing within the inflated (and periodically deflated) macro. The gold mining sector is not about inflation. As in 2003-2008 the gold miners can rise during an inflationary phase, but as in Q4, 2008 they would then be summarily executed due to poor accumulated fundamentals.

The correction in the gold mining sector from mid-2020 into Q4 of this year was entirely normal to this analysis. What is (or should be) abnormal is excuse making and ghost stories about conspiracy and manipulation to explain why gold miners did so poorly. As you probably know, there is a lot of that out there. It's tradition in the precious metals complex.

But again, the gold miners leverage gold's relationships with the greater macro and during an inflation cycle like the one we just had, gold was an also-ran just as it should have been. That made gold mining a compromised business as cost input commodities (eg, oil and let's not forget human resources and materials) out-performed the gold mining product.

Therefore, in order to gain insight into the proper backdrop for the gold mining sector, I usually compare gold's status to that of other markets. But here, using the respective ETFs, let's take a checkup on the gold mining sector's progress vs. cyclical and inflation-sensitive markets, which would validate the relational gold analysis by showing the miners' relative performance.

US gold miners versus the wider US stock market (GDX/SPY) shows an attempted trend change after bottoming over 3 months ago and establishing an intermediate uptrend. 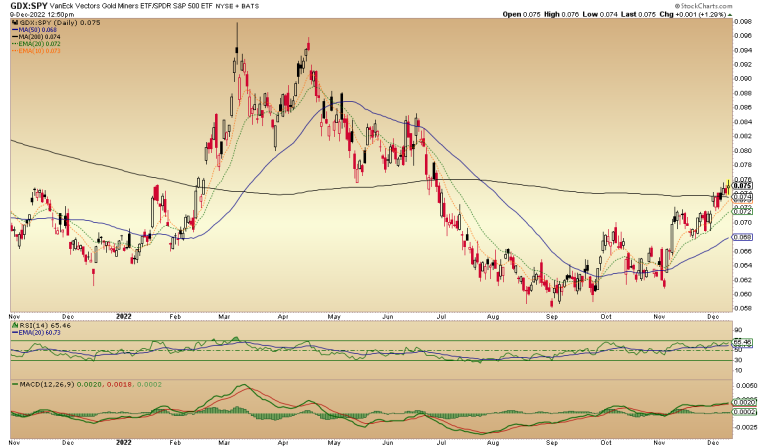 Taking out the simple 200-day moving average, as it is trying to do now, would be an important step to changing the major trend in GDX/SPY.

Gold miners versus the global stock market (GDX/ACXW) shows a slightly lesser attempt. Global stock markets have been strong relative to the US for over a month as the US Dollar has been in correction. 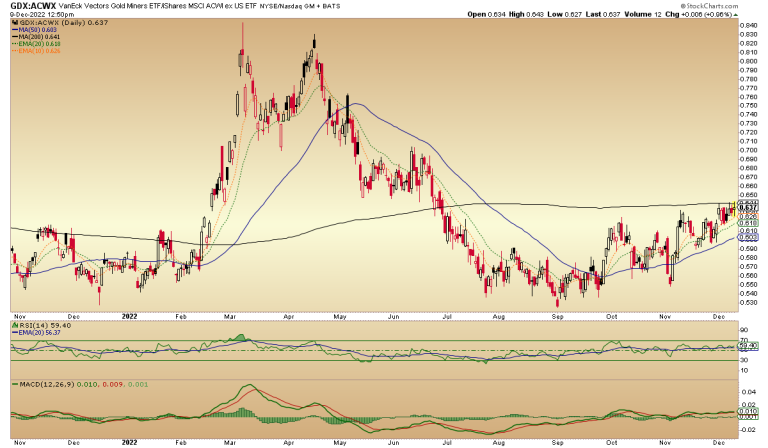 Gold miners versus the commodities sector (GDX/DBC) is nearly 1.5 months into a strong rally. Again, it's a nice validation of one of most important rules we follow in NFTRH, which is that you don't buy gold mining stocks in any way other than as a trader during inflation but you do buy during dis/de flation, especially if the miners are in correction due to deflation fears (babies out with the inflationary bathwater). 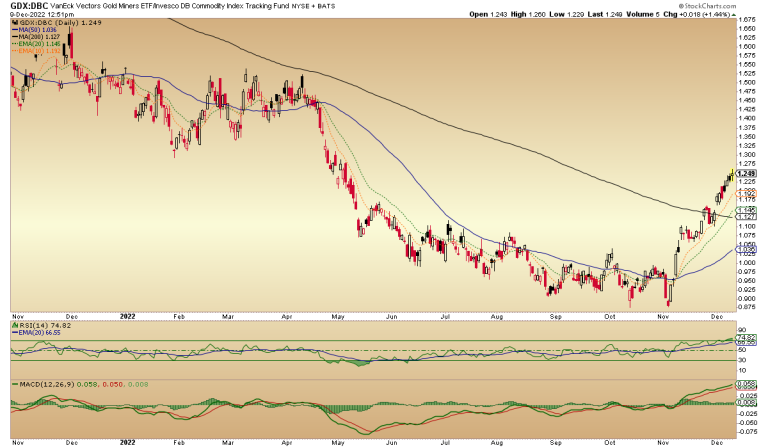 Gold miners are hammering the broad commodity spectrum of late, 100% to our plan.

Gold miners versus the crude oil price (GDX/USO) also shows the miners vs. one of their primary cost inputs. USO may not be 100% accurate as a marker but it sure is close enough, and it is another that validates our view (and invalidates the 'buy gold, copper, oil, hogs, etc. for inflation' brigade). 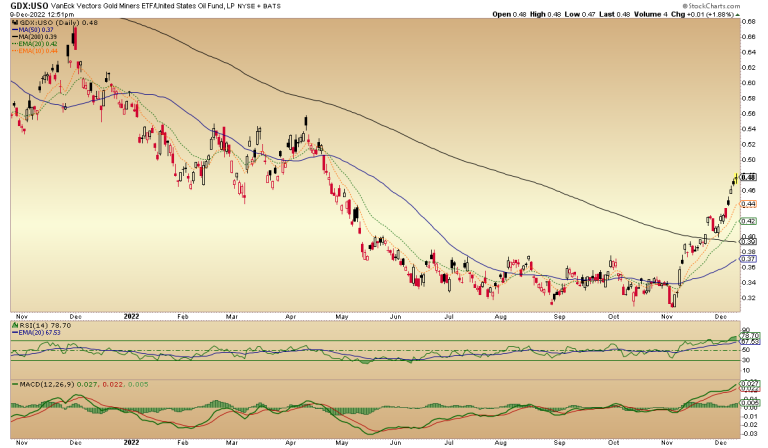 Gold miners versus copper prices (GDX/COPX) shows an incomplete aspect of the fundamental picture. As other commodities fall by the wayside copper and its industrial metals bros are hanging tough as China reopening hype envelopes the land. 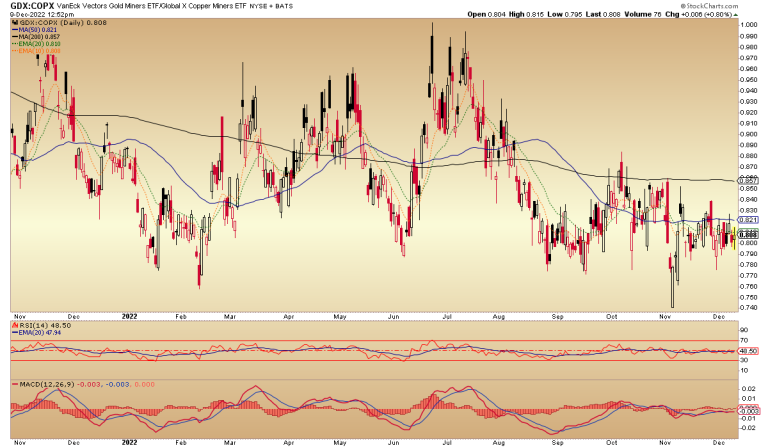 Copper is bouncing within a downtrend and it's the season of good cheer (cue Cramer) and relief by the punch bowl. It's not going to last. But for now, it's a holdout among gold mining ratios to other markets. 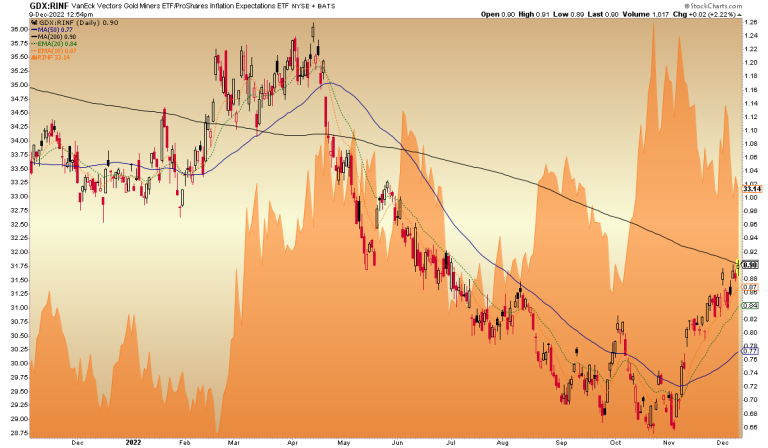 Again, not surprising. But it's making some progress and as we've been noting in NFTRH for months now, changing the macro is likely to be a process, not an event. GDX/RINF is still trending down and nominal RINF is still in a series of higher highs and higher lows. In other words, an uptrend.

Much like gold's process of taking eminence within the greater macro markets, the gold mining sector is also in the process of validating the NFTRH view for 2023, which is decidedly not inflationary with the main question being between disinflation and an outright deflation scare.

Such a backdrop will not be easy to manage, volatility-wise; especially with a majority of gold bugs still brainwashed about inflation.

But any forward volatility aside, it will be the right backdrop for lock and load buying of quality gold mining stocks (I currently hold several as seasonal positions at least, and longer-term positions, at best, and ahead of the Fed's December rate decision, partially hedged into FOMC week along with shorts against a couple other non-related stock market indexes).

As a side note, any given gold miner – especially those located in problematic regional/political situations – can have its own business execution problems at any given time. But generally, I believe the sector (even if you simply buy GDX) should do well (we have our ultimate upside target for the HUI Gold Bugs index, which you may have already seen if you read this site regularly) and a selection of the best gold stocks (royalties included) should do very well in 2023.