END_OF_DOCUMENT_TOKEN_TO_BE_REPLACED

ALL these "Crisis!" headlines keep piling up like autumn leaves here in October 2021, writes Adrian Ash at BullionVault.

And for investors and savers, nothing is clogging the pavements and gutters like the "Inflation!" panic hitting financial sites and editors.

"Bitcoin, not gold, is the new inflation hedge" says the US financial giant...

...and it might have a point. But only if a) you squint hard enough at the charts...

...and b) only if you expected gold to jump in lock-step with inflation anyway.

"Inflation has jumped yet gold has been falling," a German investment magazine asks BullionVault.

First, expectations are to blame, not gold.

The precious metal doesn't make any promises; it does so little in fact, that it can't even rust.

Yet gold is regularly promoted as a remedy for any financial problem you can name, from inflation to geopolitics to a stockmarket correction.

Many journalists and analysts also seem to expect gold to work as an instant cure, if only so that they can then say it is "failing" when it doesn't live up to these projections.

In reality, gold has repeatedly helped investors offset losses on other assets, but only when they really needed it to.

Strong gains in gold occur during extended periods of poor or negative returns on cash, bonds or equities. Shorter-term, gold shows little or no correlation with sudden or temporary problems, and that includes inflation.

What is the real connection between gold and inflation?

Historical studies suggest that in real terms, gold has held its purchasing power across very long periods of time.

But that means centuries rather than years or even decades, and on shorter time horizons, there is no clear or mechanical relationship between gold prices and inflation.

Indeed, over the last 20 years gold has risen by 385% in real terms for German investors while inflation averaged 1.4% per annum.

But over the previous 20 years in contrast, gold's purchasing power fell in half while inflation was almost twice as fast, averaging 2.6% between 1981 and 2001. 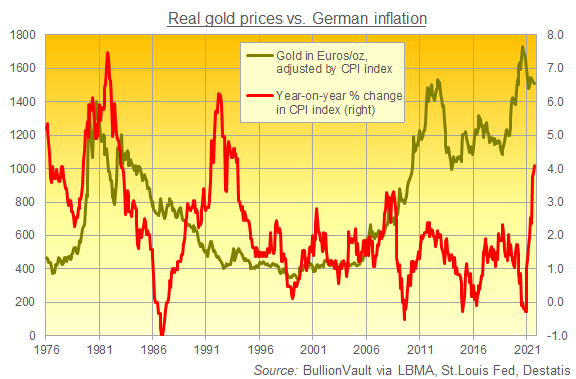 What changed? The big difference was interest rates.

Cash in the bank paid strongly positive returns between 1981 and 2001, and 10-year Bunds yielded 4.4% above Germany's CPI inflation on average.

Since then, real interest rates have sunk, with the real yield on Bunds averaging just 0.7% since 2001 and turning deeply negative since the European Central Bank cut its overnight rate below zero in 2014.

So investors are right to expect inflation protection from gold?

To some extent, yes. Over the last 50 years, German gold prices have risen 10.0% per year in real terms when Germany's inflation rate exceeded its 50-year average of 2.5%, but they rose only 3.1% on average when inflation was slower.

But those averages are skewed by the 1970s, when inflation was of course the No.1 financial issue worldwide. Gold also rose sharply, and so people have come to associate rising gold prices with rising inflation.

What really drove gold higher in the 1970s, we think, was the impact of inflation on other assets.

So people began seeking an alternative store of value, and gold stood out...

...first because it remains scarce and tightly supplied (very unlike cash or debt today)...

...and also because it had quite literally been money as recently as 1971, when US President Nixon finally abandoned the Dollar's official gold-exchange rate.

Inflation then stayed strong in the 1980s, yet gold prices fell...

...and the precious metal kept falling, even when inflation turned higher again in the early '90s...

...because real interest rates turned strongly positive as central banks, most notably the US Federal Reserve, finally acted to tackle the rising cost of living.

That changed again around the turn of the Millennium. The DotCom Crash, then the financial crisis, then the Euro debt crisis, then Brexit, and then the Covid pandemic drove central bankers to try fixing every problem they faced with cheap money.

Slashing overnight interest rates to zero or below, Western central banks have also pushed down longer-term rates in the bond market through quantitative easing. 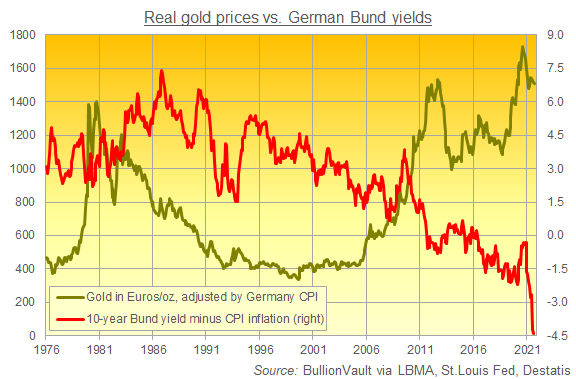 But with real rates at record lows, why isn't gold responding?

First, investment demand is what drives gold prices higher or lower, and last year's Covid Crisis saw such heavy investment demand for gold that 2021 was always going to struggle to follow it with new record high prices.

Second, the relationship between gold and real rates has become very well known among professional investors and traders. So rather than waiting for monthly inflation data, they can now get market-based signals for inflation expectations second-by-second from bond prices.

Specifically, that means the 'inflation-linked' bonds that the USA, UK and other governments launched around 20 years ago.

This means many hedge funds now bet on the direction of gold prices by watching those inflation-linked bonds very closely...

...and their prices have in fact fallen back as this spring's inflation scare has become the summer and autumn's inflation reality.

That has driven the real yield suggested by these inflation-linked notes suggest upwards, and it shows that bond traders think monetary policy will become tighter in future.

This points, thirdly, to an important fact about gold's relationship with real interest rates:

It isn't the level which matters, but the direction.

US bond yields, for instance, remained below the rate of inflation through most of 1975, but gold priced in the Dollar fell by one-third as those real rates rose from minus 4% towards zero and then above.

Because while those yields remain firmly negative (near minus 1.0% on 10-year US TIPS), they stopped falling and turned upwards three times now since gold hit $2000 per ounce in August 2020.

So has the long bull market in gold come to an end?

Central banks across emerging markets have started raising their cost of borrowing to try slowing inflation. Some G20 nations are doing the same, hoping to stem their currencies' drop against the almighty Dollar.

And if Western central banks all now start to tighten monetary policy to fight inflation, gold may well fall.

But to achieve that, history suggests they will need to raise interest rates faster than the cost of living is rising...

...and with global government debt levels now near peace-time records after the financial crisis and Covid pandemic, it's very hard to see the Fed or ECB or Bank of England threatening the economic recovery or their governments' sovereign spending policies with positive real rates.

Equally important for gold's outlook, this autumn's talk about QE tapering and rate rises seems to be worrying stock market investors, and just as gold has in the past offered protection against negative real returns on cash and bonds, it has repeatedly helped offset losses on equity portfolios across longer time frames too.

Over the past 50 years, for instance, the German stock market has shown a loss from 5 years before some 15% of the time. Gold prices were higher 9 in 10 of those occasions, averaging a 5-year rise of 57% while the CDAX price index showed an average 23% loss.

Nothing is certain of course, and historic patterns are no guarantee of the future.

But this, in BullionVault's experience as the No.1 provider of physical ownership, is why most investors holding gold choose to buy the metal.

It's a way of spreading risk from cash, bonds and equities with a rare, timeless alternative that tends to do well when other things do badly for extended periods of time.

That's what history and the data suggest.

Small comfort, of course, if you want gold or silver to jump and offset this autumn's surging energy costs before your next heating bill lands on your doormat.

But if this really is the long-term inflation-driving energy crisis everyone seems to think it is, then we're still in the very early stages so far.