END_OF_DOCUMENT_TOKEN_TO_BE_REPLACED

But but but...gold always goes up on monetary inflation. Wrong...!
In TODAY's policy and media-stoked market environment, anything is possible, writes Gary Tanashian in his Notes from the Rabbit Hole.
It's the wonderful, magical world of hands-on policy making, five years after the financial crisis. Still not enjoying a ramping economy like the good old (and long gone) days of the last great secular bull market (RIP 2000)...? Then just sit back, relax and let the man in charge control the image.

"For the next hour, sit quietly and we will control all that you see and hear. We repeat: there is nothing wrong with your television set. You are about to participate in a great adventure. You are about to experience the awe and mystery which reaches from the inner mind to – The Outer Limits..."

What has been happening for the last year is that people have been obeying these instructions. Yes, the same herd that reviled 'Helicopter Ben' (didn't you just know in your gut that these taunts would come back to bite inflationists, commodity bulls and gold bugs?) in 2011 is now enthralled and awaiting the next chapter in the great adventure.
"The stock bull is a reflection of an organic and healthy economy," claim the politically biased or mentally challenged. 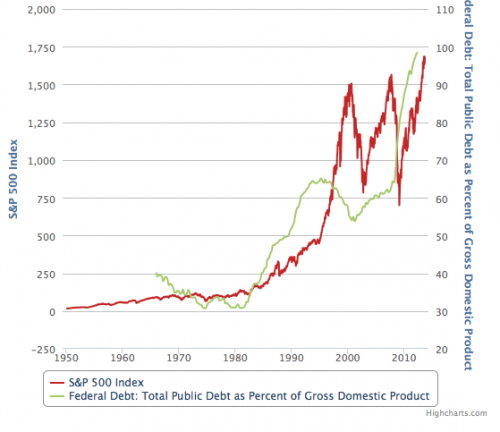 We have reviewed graphs in the past comparing the S&P 500 to Monetary Base and other measures of monetary inflation. ( Charts courtesy of SlopeCharts.)
The cyclical stock bull out of March, 2009 has risen in lockstep with money supply. The current leg of the 13-year long (and counting) big picture stock consolidation per the graph above, has been dependent on money supply creation fueled by increases in the public debt. The stock market loves this policy and is dependent upon it.
Why did the FOMC blink on Wednesday? They have smart people who can look at a chart and conclude the same thing: dependency. Many have proclaimed that the S&P 500, at new all time highs, has just begun a new secular bull market. For a grim reminder of how a breakout can fail miserably (I know, because I had bad upside targets based on this breakout), we once again refer to Mr. Huey, the HUI Gold Bugs Index of Gold Mining stocks... 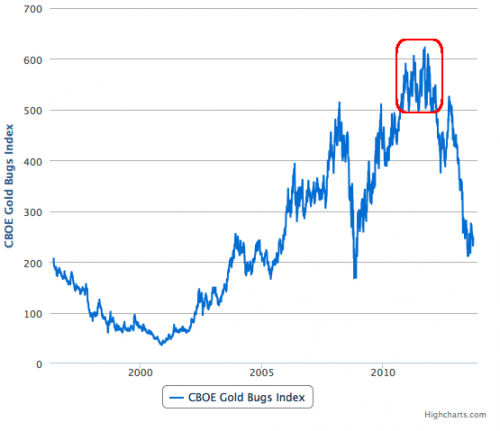 The question remains, how do you project a new secular bull market 4.5 years into a cyclical bull market that is getting long in the tooth?
Stock market bulls making such projections are staking claim to a contrarian mantle. In my opinion, they are merely capitalizing on a newly bullish public that is ripe to be sold a 'new secular bull' story as the cyclical bull matures.
Precious metals players have suffered untold ignominy in this great adventure. "But but but...precious metals always go up when inflation's effects (i.e. prices) do!" Well no, they don't. Over the long term they effectively protect against the price effects of inflation subject to certain err...adjustments.
Over the last 2 years the gold "community" has gotten adjusted. It is as simple as that. The steady march of inflation's embedded effects continues unabated. This brings us back to Biiwii/NFTRH's biggest picture theme; we are in an era of chronic economic contraction being fought by policy makers in the only way they know how; through inflation.
One day the system is going to puke up all of this debt. That is where the first real deflation since the 1930s could come in (2008 was a liquidation within an ongoing inflationary era). 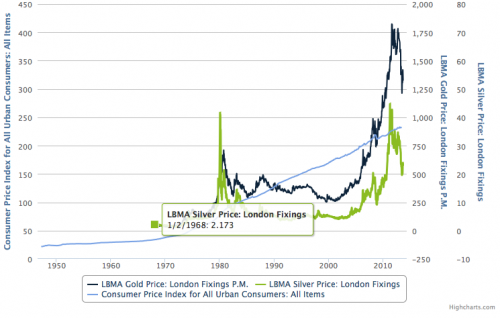 Meanwhile, there are signs that the deflationary pull in play over the last 2 years may be changing. Nobody expects an inflation problem because the effects of the current inflation have been so well contained over the last 2 years (post-2011 commodity blow off).
This is not a prediction that inflation's effects are going to rise to the surface soon, but we do note that it is a distinct possibility. We also note that despite this post's Outer Limits shtick (it's getting over played, I know) policy makers are not in total control. Casino patrons merely perceive them that way in the current phase.
The Fed wants inflation and is trying to achieve it, per FOMC's own words. But will they get it? If so, how much of it will they get? The desired amount (that they think they can control) or something more undesirable?
Is it a coincidence that China and Japan were net buyers of T bonds in July? They were net sellers in June and then we were served Huey, Dooey & Louie (Fed talking heads in the media) and a 24/7 "taper" hype job.
Now, global supply and demand has taken a 'tic' toward favorable for T bonds (for July, anyway) and suddenly the Fed surprises with NO TAPER.
Are you kidding me? Who is really in control here?