END_OF_DOCUMENT_TOKEN_TO_BE_REPLACED

GOLD PRICES surged from 3 days of losses Thursday lunchtime in London, erasing all of this week's earlier $20 drop after new US data said consumer-price inflation in the world's largest economy just hit the strongest underlying pace in almost 3 decades.
Falling ahead of the CPI data, gold priced in the Dollar touched 1-week lows near $1870 before jumping 1.0% inside 25 minutes of its release.
Today's estimate from the US Bureau of Labor Statistics said the headline cost of living jumped 5.0% in May from a year before – the fastest since mid-2008, when crude oil prices hit their current record of $150 per barrel just ahead of the crash phase of the global financial crisis. 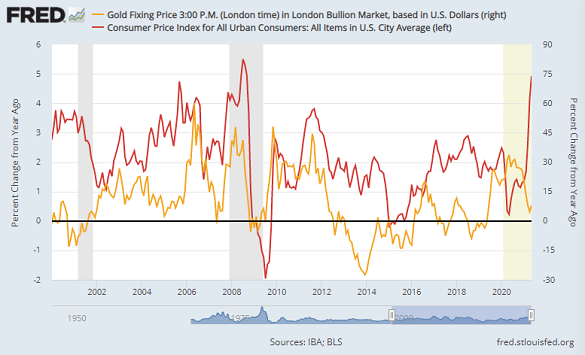 The BLS' more closely-followed 'core' inflation index – which excludes food and fuel for being too volatile – jumped 3.8% per year, its fastest since May 1992, just after that decade's brief economic recession ended.
Longer-term interest rates rose worldwide both before and after the US CPI figures on Thursday, bouncing sharply from yesterday's multi-week lows.
Western stock markets meantime held little changed overall after the MSCI World Index retreated overnight from Tuesday's fresh all-time record high.
Together with US inflation figures, monthly US wage data show "the biggest decline in real average earnings since '08," says Bloomberg columnist John Authers.
"[This] is almost certainly transitory, thanks to the re-hiring of lower-paid workers in recent weeks. But it's hard to ignore."
" More than 2.3 million new stimulus checks have been sent," says CNBC, reporting US Government figures, "representing over $4.2 billion in payments to Americans" as part of President Biden's Covid recovery plan.
"The meme stock craze is a liquidity phenomenon," says one strategist meantime of private investors using leverage to chase unloved and heavily shorted share prices higher, a phenomenon which saw further volatility Thursday in videogame retailer Gamestop (NYSE: GME) – a firm favorite with so-called Reddit traders, who drove silver prices from $25 to $30 per ounce in 3 days at start-February – after it reported being investigated by stock-market watchdog the SEC.
Silver like gold today rallied back to last week's closing level, trading 40 cents higher from an overnight low to reach $27.95 per ounce.
The UK gold price in Pounds per ounce also rallied back to last week's finishing level to trade at £1335.
Gold priced in the Euro meantime rose sharply back to €1551 per ounce, just €10 shy of last month's closing level – its highest month-end since October.
"Inflation has picked up over recent months, largely on account of base effects, transitory factors and an increase in energy prices," says European Central Bank chief Christine Lagarde, dismissing fears of rising living costs as a reason to raise interest rates or reduce quantitative easing.
With Eurozone inflation reaching 2.0% for only the 8th time in the last 60 months in May, Lagarde's team at the 19-nation central bank today "decided to confirm" what it chose to "reconfirm" at the previous meeting in April, namely "its very accommodative monetary policy stance" of holding deposit rates at minus 0.5% per year and creating new money to buy government bonds up to a total of €1.9 trillion "until at least the end of March 2022."
"Inflation is expected to rise further in the second half of the year," the ECB president added, "before declining as temporary factors fade out...[and] remain below our aim over the projection horizon."
Looking at gold investment ahead, "We expect flows to be positive in 2021 on the [economic] reflation trade," says analysis from French bank and London bullion market maker Societe Generale, "but rising [interest] rates mean that there are conflicting forces affecting the gold price.
"It will be important to evaluate whether the market remains focused on real rates, which should stay slightly negative due to inflation, or nominal rates, which should rise and appears to increase the opportunity cost of holding gold."