END_OF_DOCUMENT_TOKEN_TO_BE_REPLACED

Or it should be. But no...
I THINK the case is closed, or it should be, writes Gary Tanashian in his Notes from the Rabbit Hole.
But with firmly ingrained perceptions passed down from one generation of inflationist gold bugs to the next, you never know.
Remember the old dismissive "gold is silver is copper is tin is oil is hogs" line from the 2003-2008 time frame? Probably not, but I remember it because it was me saying it against an army of inflationist commodity and resources bulls advising to buy gold, buy silver, buy oil...buy resources of all kinds to protect yourself from the evils of inflation!
As an interlude, here is a pleasant interaction I had with a reader (actually, the interaction was his in a comment to an article of mine, but you get the drift) during the 2016 gold sector launch that ultimately proved to be ill-fated by mid-year because...inflation.

"I'm sick of internet dipshits and the lying media and govt trying to tell me there's no inflation! Inflation in the US is VERY HIGH. Its currently 8.3%, and has averaged 9.5% over the past 7 years."

Dude, the article was about why gold stocks do not benefit from inflation and why at that time the backdrop was positive (again, it degraded badly later in the year as inflation reared its head).
Of course there is inflation, all along the Continuum of deflationary macro signaling against which they routinely spray the stuff out of fire hoses, like now for example.
Without the secular decline in Treasury bond yields and complete abdication of the mythical bond-market Inflation Vigilantes, the decades-long inflationary regime would not be possible. Jerome Powell was unimaginably hawkish during the market correction of late 2018. The herd could not understand why, but we could. Inflation signals were getting out hand as the yield spent a couple months above the Continuum's limiter (monthly EMA 100). 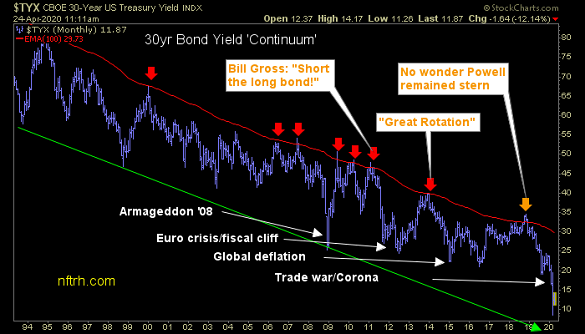 But sure enough, that got fixed as we suspected it would, with the Continuum hammered down since then into today's deflationary doldrums.
The Continuum has reloaded the inflation gun yet again as yields have tanked and bonds have bulled ever since. But that, among other indicators, showed that the time had become right for the gold mining sector, which is the transitional sector (first and best mover) to a new would-be inflationary regime.
So the tie-in of gold to the cyclical inflationary stuff is bad enough, although understandable, because the prices of everything noted above in the first paragraph are in positive correlation to cyclical inflation, with gold the least well correlated
But gold miners are not fundamentally helped in the least by cyclical inflation (as gold usually under performs cyclical items, including mining cost drivers). They are fundamentally impaired. So by extension, if those lumping gold in the same basket as other resources have it wrong, those putting gold stocks in that basket are significantly more so.
The Macrocosm is a cartoon with an accurate message with the exception that the Covid-19 crisis has rammed an already positive turning picture for the gold sector further into gear.

With respect to the note at the upper left this pestilence has taken down the global economy, which is among the very primary fundamental considerations for gold mining. China & India "love trade"? What a whopper of a promo that was. Inflation? 'What's that?' (think today's market participants), and so on.
The backdrop for gold mining is in gear, we are managing it well (in NFTRH) and that is because we never, not for one second, put inflation into the discussion other than to note that the gold miners are the transitional sector into a potential new, wider inflation trade.
An obvious inflation problem may not come on cue this time. But if it does as I think it will eventually, it would start the clock ticking on the end of the gold stock rally. It could be quite some time before the clock even starts to tick and much longer before the miners finally get the bearish memo. Refer to cyclical inflation periods 2003-2008 and 2009-2011 (2016 was a microcosm as the sector got flattened by cyclical inflationary pressures by mid-year as stock markets took over and benefited while the economy held firm).
Meanwhile in the foreseeable future, we are projecting a good run for quality miners because of among other things, the lack of inflationary signaling out there despite massive monetary and fiscal policy efforts to the contrary. The best case for gold mining investment does not involve inflation. That comes later.