END_OF_DOCUMENT_TOKEN_TO_BE_REPLACED

Patience, patience...
BEFORE updating the status of the gold miner (HUI) correction, let's take a quick review of the Macrocosm, writes Gary Tanashian in his Notes from the Rabbit Hole.
Because it's always a good time to be clear on important macro considerations.
In order of priority, a bullish view of gold needs:
The reason I am writing this article is because, as the gold sector moves along in its correction, the fundamentals and macro indicators look to regenerate a positive backdrop for the counter-cyclical gold stock sector, which will leverage gold's performance vs. economically correlated cyclical assets.
The correction in the HUI index of gold mining stocks has been on for a few weeks now and has only tested the 50-day moving average.
Despite the big pop and big drop on the hype filled FOMC last week, we noted in a subscriber update that HUI will not be indicated to exit its short-term correction unless it takes out a key level. I'll have to reserve that level for the update, but I'd like to review many other parameters on the daily chart, which I'll let speak for itself mostly.
The bottom line here is that if HUI does not exit its correction in the short-term it is still a candidate to correct to deeper levels. HUI does not have a gap at its second support area but the GDX ETF and XAU index do. Those may be meaningful. If we get such a pullback to the 38% or even better, the 50% Fib retrace level and world markets are caught in the grip of
another significant correction, the indication will be to buy quality gold stocks, and buy them hard. 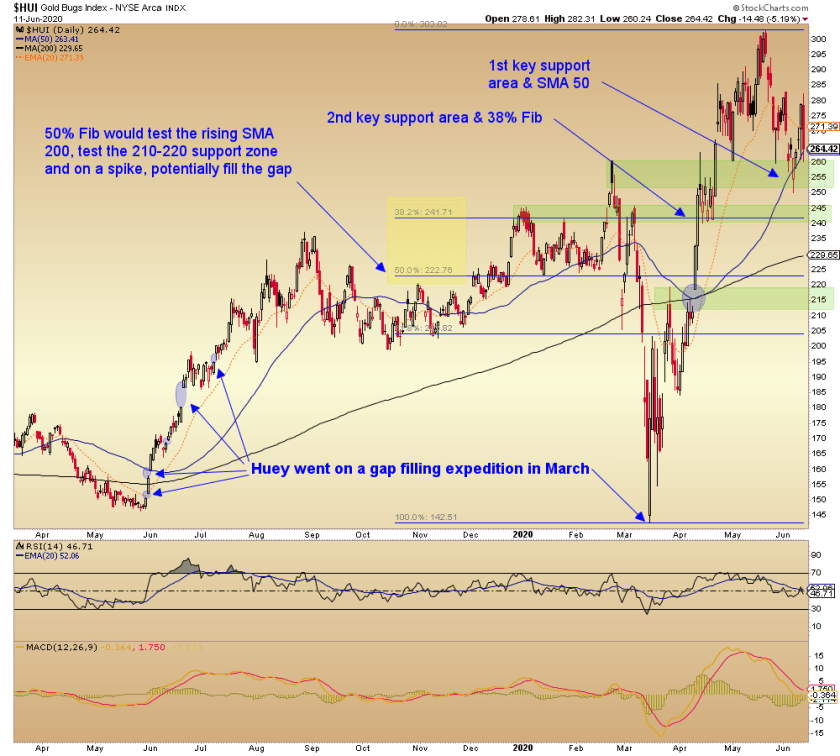 The best buy area would be at the 50% Fib, just below the rising 200 day average. The gap was a breakaway gap that drove HUI back into an uptrend. It does not need to fill but it would not be a bad thing to get it out of there. But technically, any of the green shaded support zones is a candidate to halt the correction.
So again, tuning out the inflationists, when looking to buy the gold mining sector we want a backdrop of declining asset prices, often including the miners as these babies get thrown out with the dirty, inflated bath water. The proper fundamentals have supported our bullish view for the last year and now should be no different, assuming the broad markets come back under duress.
We all know that the economy is in contraction, so we don't need to account for the status of the #1 supportive macro indicator for gold stocks. Let's proceed to #2.
Is gold rising against the wider stock market? This handy chart gave myself and NFTRH subscribers a heads up on the miner correction to come just as it did on two previous occasions. 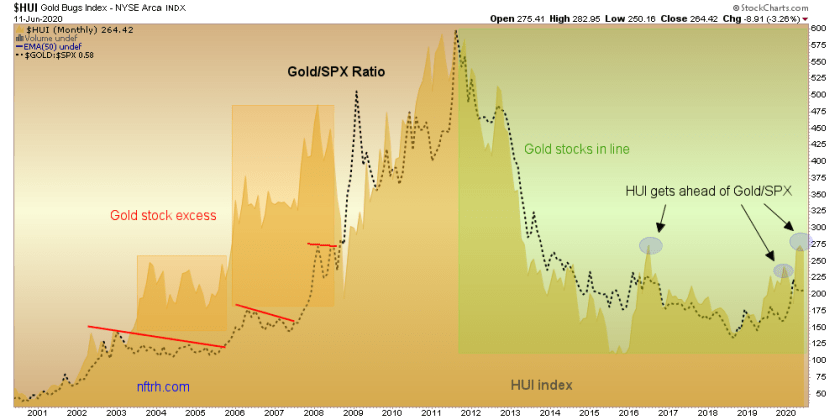 Gold/SPX is bullish and so this is a bullish macro indicator for gold mining. It did however, get too far stretched into risk territory back in May. That is being attended to now, either by a continued gold stock correction/consolidation or a resumption of gold's bullish trend vs. stocks markets.
Is the yield curve steepening? From CNBC, here is the updated spread between the 10-year and the 2-year yield. Since last summer's well hyped tick to inversion the curve has steepened.

That tends to be gold-positive, whether it is an inflationary steepener or a deflationary steepener (both macro conditions can drive the curve).
This indicator remains constructive for gold and thus, gold stocks.
Gold vs. Commodities is important not only on a macro indicator level (showing HUI's performance vs. gold's real, commodity-adjusted price) but also on a sector fundamental level as energy and materials commodities drive mining costs. 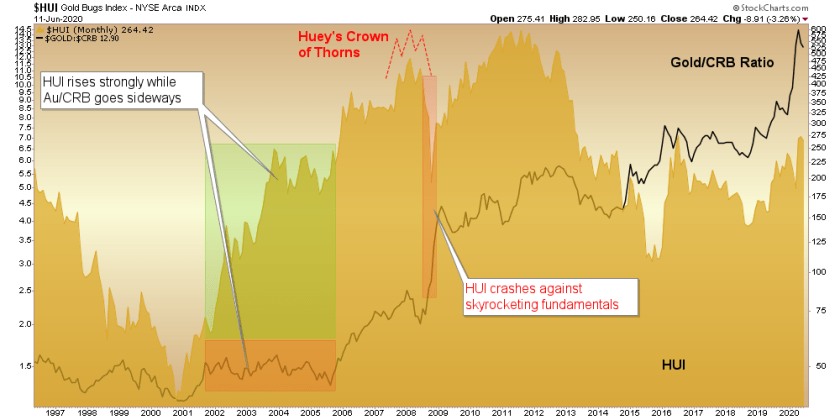 Here is a log scale monthly chart showing HUI still in 'value' territory vs. this bullish indicator.
We'll make Gold vs. Currencies the last item here, and skip the inflation items because the inflationary rationale for owning gold stocks, while it can succeed for long periods like the 2003-2008 phase, is a canard.
Cyclical inflation is not fundamentally positive for the gold miners. But gold's standing vs. global currencies is definitely an indicator of investor sentiment toward steady, value retaining gold and a world of major paper/digital tramps.
Let's check out a daily chart showing that, as the US Dollar has declined (as it should during the reflationary post-March market sentiment adjustment rally), fellow risk 'off' vehicle gold has pulled back vs. most global currencies, but has begun a rebound. 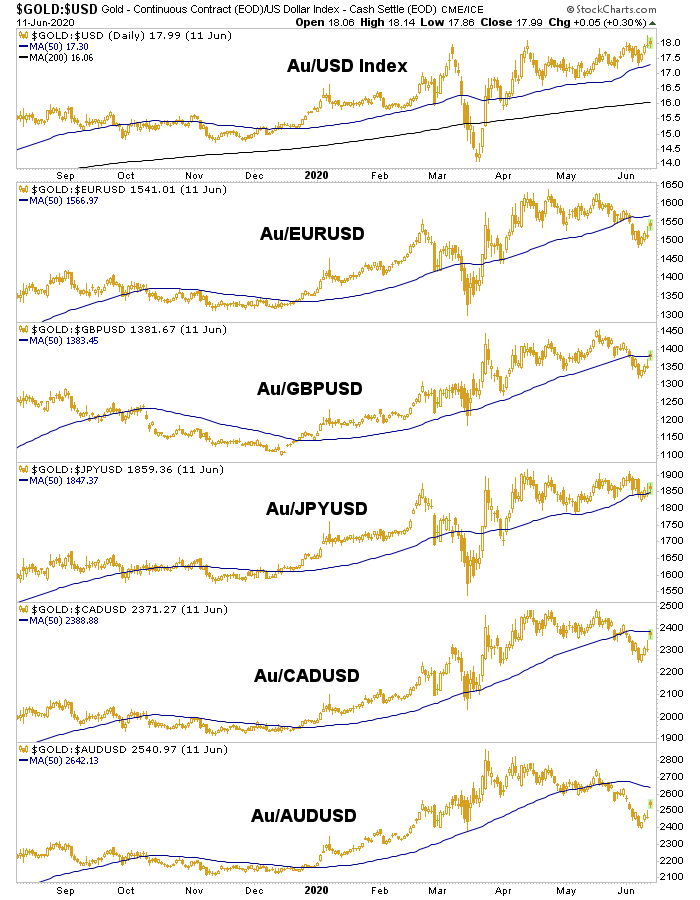 It is interesting that the two commodity currencies (Canada & Australia) have been the firmest lately. Interesting, but logical, since the most recent leg of the stock market sentiment rally had a reflationary component to it. This little rebound in gold vs. global currencies (but not necessarily the risk 'off' USD) needs to continue to get back in shape.
The sheer terror at the March lows experienced by casino patrons was bound to eventually resolve into a strong sentiment event going the other way. It has and we have taken advantage of it since March.
Last week may have been the first crack in the relief rally (we will look for certain confirmations or negations) and if it is, then the gold mining sector's true fundamental and preferred macro backdrop will be in place for new buying, especially if the inflationist bugs sell and drive the miners down further to significant and logical support areas.
Regardless, this sector continues to look like the standout in macro markets and economies that will continue suffering from an ongoing confidence drain once the stock market relief rally is done and resolved. It'll pay to have your list of preferred quality miners, royalties and exploration companies at the ready for new buying. Note the word "quality", because there is a lot of junk out there waiting to be promoted for your hard earned funds