END_OF_DOCUMENT_TOKEN_TO_BE_REPLACED

The CURRENT situation has seen some calling 'bullish' on the stock market despite a still intact bear trend, writes Gary Tanashian in his Notes from the Rabbit Hole.

People are also going bullish on commodities despite their "bounce only" status in the absence of real, market-based inflation signals (which I do think are coming soon) and global markets bouncing within bear trends of varying degrees.

But the good feelings of the last 1.5 months have been indicated as a counter-trend bounce to reset the unsustainable bearishness of January and February's downside, although the bounce has come very close to the point where it could negate the bear trend. As yet, it has not.

In the most recent post in our Macrocosm series on February 12 we noted that "the planets align" – and after a subsequent bull run in stocks and corrective consolidation in gold and gold stocks, everything is still lined up for this macro view.

I will state up front that I have been no bull hero on the gold sector since things became very over bought about a month ago.

That over-bought state plus the projection of a stock market relief bounce begged caution. Personally, I traded the miners during this jagged up and down phase, only holding a couple firmly (which happen to have been in bull markets since 2013). Another point of moderation is that although I think a bull market has started, it is not technically proven and will not be proven for the entire sector until higher levels are exceeded on the indexes.

There are very clear levels below which anyone definitively calling this a bull market is promoting an already formed conclusion based on fundamentals or hope, not technical reality.

But this week we have noted some things both fundamentally and technically that put us on alert for a short-term bullish resolution of the consolidation, especially in the gold miners. So maybe my caution was over done. Again, the market decides these things but we sure do need to be ready to take incoming signals and use them accordingly.

First, we asked that the miners not lose their leadership vs. gold on any coming correction. So far so good. In fact, we've had a new high in the HUI-Gold ratio of mining stock prices to gold bullion prices, as the miners rose despite a very weak stock market.

We also asked that the sector and macro fundamentals not degrade significantly as the expected stock market bounce played out (which itself was antithetical to the counter-cyclical gold sector). Gold has thus far maintained its flag-like consolidation of the big up-surge as measured in S&P500 units.

Here's the weekly we have used all year to gauge the progress of this important macro fundamental (see biggest planet above) consideration. Gold needs to turn up soon as measured in SPX. 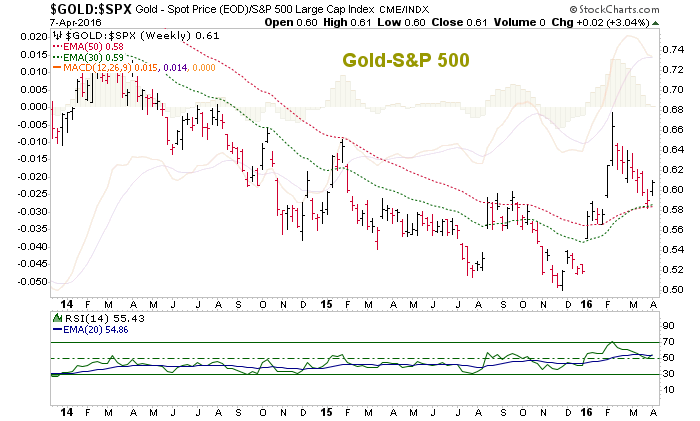 Gold vs. European markets looks even better as we noted last weekend that the flag was starting to make a bullish look. This week there is follow through. Gold vs. the balance of developed world equity markets looks as good as or better than the average of these two. 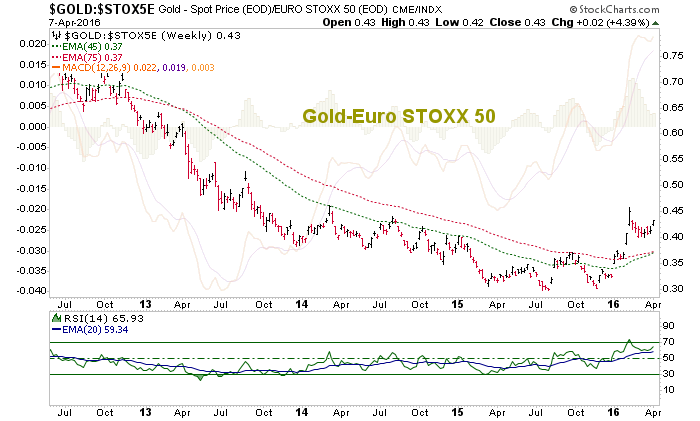 Let's spare the whole macro fundamental checklist for now, and just note that inflation is not the play. Or more accurately, at this juncture it is not a primary consideration for gold and it is never a good fundamental input for gold stocks (assuming the inflation is manifesting in rising prices of commodities and buoyant financial markets).

Of late I have heard a lot of gold bashing about how it is a lousy inflation hedge. Well, no $h!% Sherlock, the real fundamental backdrop as noted in our handy graphic above shows inflation to be the 2nd tiniest planet in the Macrocosm.

Enough already. What is really important (aside from the above-noted gold vs. stock markets) is the economy (the state of which can be argued but generally, it has been an unsatisfying economic performance to this point and while we have projected a manufacturing bounce due to the weaker Dollar, there are negative signs aplenty in the economy as well), declining confidence and a rising yield curve.

Today, let's focus on this heretofore holdout macro fundamental to the case for gold. First, we have been following a situation whereby Commercial traders are very net short the 30 year Treasury bond and very flat the 10 year (they rarely go net short). Graphics courtesy of Sentimentrader.com:
http://sentimentrader.com/

These same traders are very long the 2-year Treasury note.

That folks, would be another important Macrocosmic element in place if it were to play out with the yield curve rising.

But let's end with the simplest of simple. A daily chart of the HUI Gold Bugs mining stock index, barring a head fake and whipsaw here, broke out of a short-term triangle consolidation, setting its sights on higher levels.

If it should follow through, be aware that sector and macro fundamentals are good but that a bull market confirmation is still out there to be determined. If HUI is breaking out again, the bull market test would be upcoming soon. 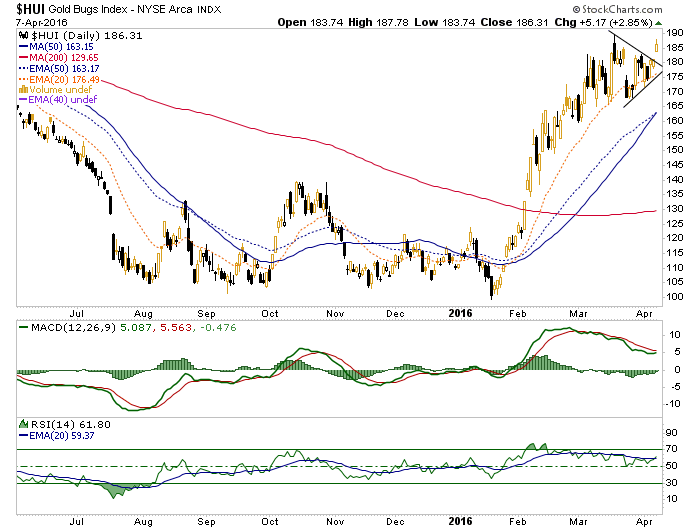 The bottom line is that through 1.5 months of market relief the risk 'off' gold sector has consolidated but maintained its key positive macro elements. What's more, the main macro fundamental holdout, the yield curve, could become interesting going forward if CoT alignments are a guide.

If the stock market keeps its bear trend intact gold sector players can firm their fundamental views going forward and if the yield curve were to rise, turn them ironclad.