END_OF_DOCUMENT_TOKEN_TO_BE_REPLACED

The perceived gap between AM and PM Gold Fix prices means less – and more – than many believe...

ARTICLES have cropped up on the internet and elsewhere over the past few years, writes Jeffrey Christian of the CPM Group in New York, discussing the perceived phenomenon that the London gold morning fix is higher than the afternoon fix.

Enormous profits could easily be made by buying on the afternoon fix and selling at the morning fix, these articles claim. A new round of such discussions reappeared in late 2011 and early 2012.

The gist of these comments is that the London afternoon fix on average is below the morning fix, so that one could make a fortune by always buying on the afternoon fix and selling the next morning at the morning fix. Others have tried to paint this as evidence suggesting a conspiracy among gold bullion dealers to game the market. Neither set of conclusions are accurate. All of the articles confused the average with the range of daily results that comprise that average.

It is true that on average the afternoon fix tends to be lower than the morning fix. However, that average masks an enormous range of results.

This highlights the large risk to this strategy.  On average, one theoretically could make a fortune on this trade. However, fortunes can be lost just as easily, and nearly half of the time someone trying to make this trade will lose money. Anyone committed to this must have incredible staying power. If he or she is part of an organization, using other people's money, or reporting to a manager, the institution supporting them must be willing to sustain consistent heavy losses in the expectation that in the long run the average difference between the morning and afternoon fixes will yield handsome profits.

Some institutional investors and others with deep pockets may try this strategy, but it clearly is not the easy money machine that people looking only at the averages suggest it is.

The distribution chart graphically portrays the risks involved in confusing long-term averages with the individual trading days of our lives. 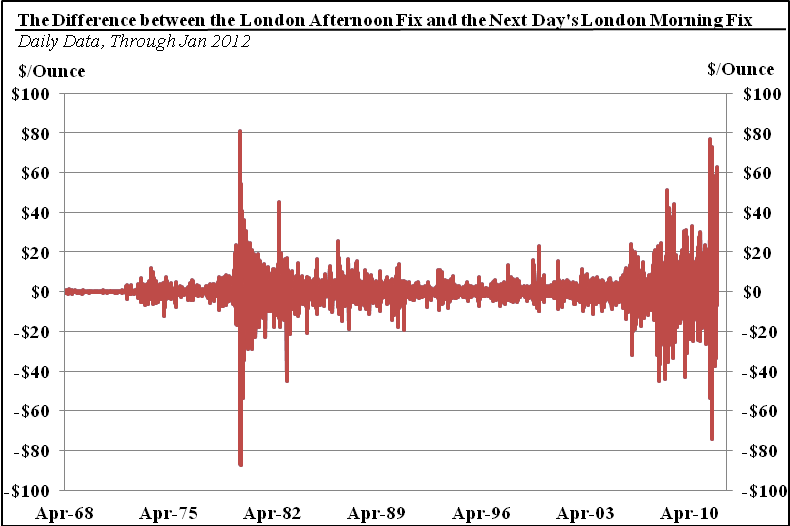 Calculations comparing prices at two specific times of the day in no way provide any insights into how the price changes during the reminder of time between those two points. Prices move up and down continually. That is how markets tend to work when they are free, unimpeded, and relatively efficient.

One could say that if it is so simple and obvious, why do not more producers shift their selling practices to the morning fix, or some other time or price mechanism. That is a very good question for shareholders to ask management at mining companies.

There are inefficiencies in the bullion market like those in many other markets, which may be large and simple to fix and still remain in the market.

This article is excerpted from CPM Group's Gold Yearbook 2012, released 27 March 2012, and republished with permission.