END_OF_DOCUMENT_TOKEN_TO_BE_REPLACED

MARKETS seem to have stood still, writes Bill Bonner in his Diary of a Rogue Economist.

Like autumn leaves on a tree, they wait for a stiff wind and a cold frost.

This week, the Fed is scheduled to make a weather forecast.

Bloomberg reports that only two of the Fed's 23 "primary dealers" – banks that buy bonds directly from the government – expect a rate hike decision when the Fed speaks.

Of course, anything is possible.

But the Fed's position is clear: It may raise rates, or it may not.

It hardly matters. Either way, it will not – it cannot – stick with a credit-tightening cycle in the face of the inevitable selloff on Wall Street and the recession on Main Street.

The days of former Fed chief "Tall Paul" Volcker are over.

Back when Volcker took over the Fed in 1979, the economy could still survive a hard freeze. The new debt-based money had not yet done its mischief.

In 1980, Volcker's first full year as Fed chief, US national debt was below $1 trillion (now it is more than $19 trillion). If you wanted to buy a house, you had to pay 12% interest on your mortgage. And the stock market had been drifting down for the previous 14 years and trading at valuations not seen since the 1930s.

And with consumer prices rising at a nearly 14% annual rate, Volcker had to do something.

Unlike his ultimate successor Janet Yellen, he did not announce a wimpy program of rate hikes – one-quarter of a percentage point every three months – and then not do it.

A frost? Volcker brought on a blizzard.

And the politicians wanted his head for it.

A group of eminent economists demanded he be removed from office. An effigy of him was burned on the Capitol steps.

Today, no one is concerned about inflation. US stocks are near an all-time high. And mortgage rates are at all-time lows. The prime rate – the benchmark rate for mortgage lending – is at 3.5%, a long way from its high of 21.5% in 1981.

And neither investors, households, banks, the feds, nor corporate America could survive even a mild monetary winter.

Of course, the weather changes without anyone's say-so. And so, ultimately, do markets.

In 1980, for example, share prices were so cheap that you could buy all the stocks on the Dow with one ounce of gold. Today, stock prices are so high, that you would need 14 ounces of gold to buy all the Dow stocks.

We once proposed a simple trading model…

Stocks represent real wealth, too. It makes sense, at least to us, that there should be a more-or-less predictable relationship between real money and the companies that produce real wealth.

Just eyeballing the chart below, we see stocks going up and down. But we see a pattern, too. 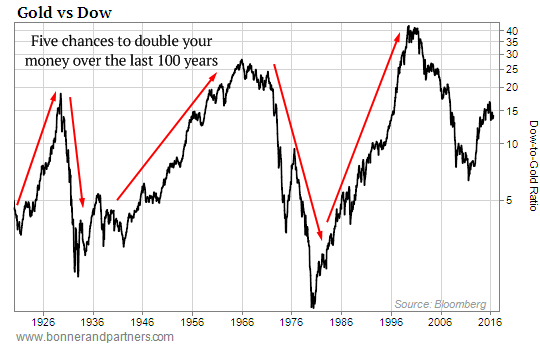 Had you stuck with our trading model, rigidly, over the last century, you would have had five opportunities to double your money.

Assuming the Dollar lost 95% of its buying power, that represents a real gain of about 1,000%.

What should you do now?

And root around in the closet for your mittens.