END_OF_DOCUMENT_TOKEN_TO_BE_REPLACED

WE ARE well along in the precious metals correction and have downside targets for gold, silver and the miners, writes Gary Tanashian for his Notes from the Rabbit Hole subscribers.

In order for that to be a 'buy', the sector and macro fundamentals will need to be in order. Some of those are represented by charts of the gold price vs. various assets and markets. Below are two important ratio charts to watch.

Gold vs. Stock Markets has been correcting the big macro change to the upside in precious metals since leading the entire global market relief phase (potentially out of the grips of global deflation) earlier in the year.

A hold of these moving averages, generally speaking, keeps a key gold sector fundamental in play, as the implication is that conventional casino patrons are choosing gold over their traditional go-to assets, stocks.

A breakdown from the moving averages and it's back to Pallookaville for the gold "community". But despite gold having topped out (in nominal terms) months ago, the gold vs. stock markets indicators are intact. 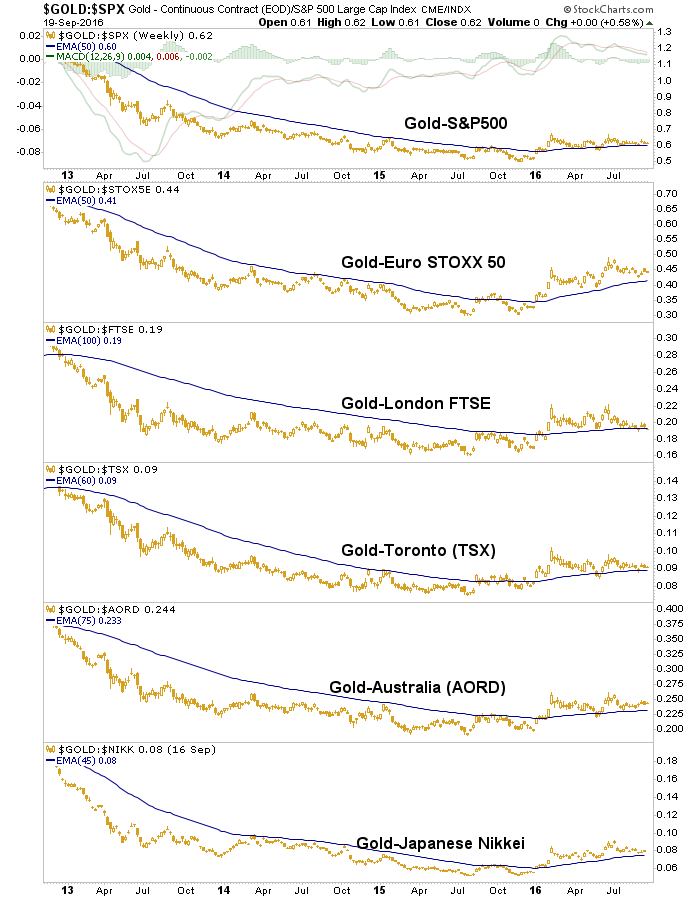 Gold vs. Commodities remains very interesting. The economy is okay (the way Goldilocks likes her porridge, not too hot or cold) and that can keep the currently flat commodity sector stable at least.

But with gold's breakdown vs. the two commodity-ish precious metals, silver and palladium, an early indication of a coming inflationary phase is still in play. 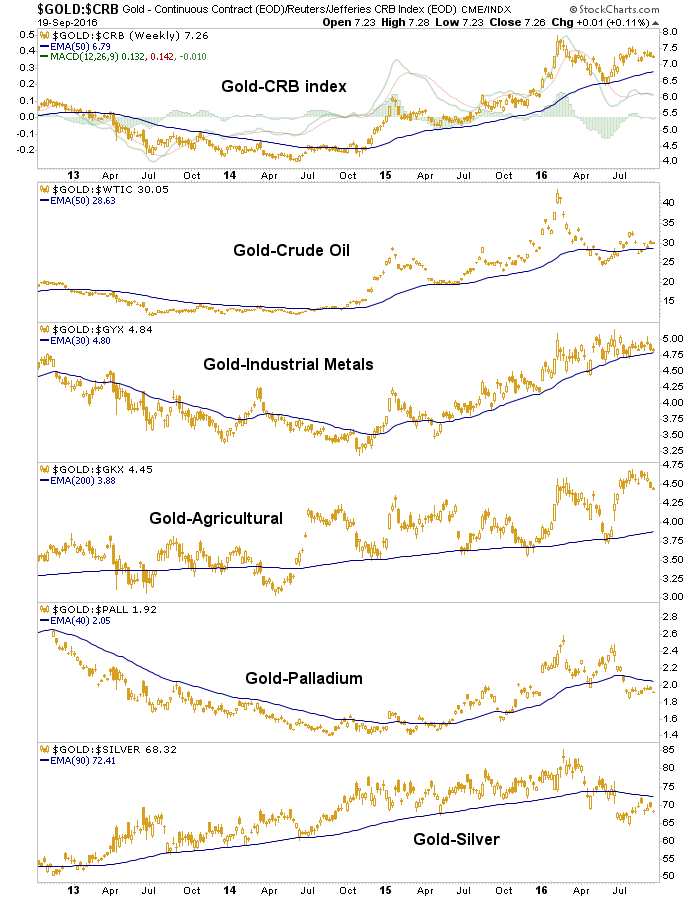 If the economy holds up, other more positively correlated commodities like industrial metals and oil could get bid vs. gold, signaling a Greenspan-era style 'inflation trade'. This would likely happen while gold, like the sun, also rises (eg, Greenspan).

Last week we got CPI data that were not friendly to the case of FOMC doves. While economic data continue to be spotty, inflation data remain firm in a persistent though unspectacular way (for the best breakdown I know of, check out Michael Ashton's observations on CPI).

Meanwhile, as the hawks, doves and wafflers do their thing, the market expects them to wait until December and that is what will probably come to be (making an assumption that all remains economically and financially symmetrical in the interim).

But the definition of surprise is "an unexpected or astonishing event, fact or thing: the announcement was a complete surprise."

I have held out hope in the past that FOMC would seek to address spiraling Healthcare, Real Estate and Services costs throughout the economy and throw a bone to savers and non-risk takers to boot.
So far...cue the crickets. It has been all about keeping risk takers, speculators and asset owners nice and comfy.

But back on the 'Gold vs.' charts above, their very blunt and general implication – especially gold vs. stocks, bonds and currencies (the latter two not shown in this post, but each very intact) – is a waning of confidence in official policy clownishness.