END_OF_DOCUMENT_TOKEN_TO_BE_REPLACED

Or maybe just in 'oversold' territory...
IF YOU were considering taking the family on a European vacation, now may be a good time, writes Frank Holmes at US Global Investors.
The US Dollar and Euro just achieved parity for the first time in 20 years.
But as someone who was recently in Europe, I urge travelers to be aware that prices have skyrocketed everywhere, not just in the US.
A five-star hotel in France or Italy that might have cost $350 a night before the pandemic can now cost as much as $1,600.
Much is being made about the USD/EUR exchange rate, but the truth is that King Dollar has made epic gains on a number of world currencies this year as the US has embarked on an aggressive monetary tightening cycle to control inflation.
Below you can see how much G-10 currencies have fallen in 2022 compared to the greenback. 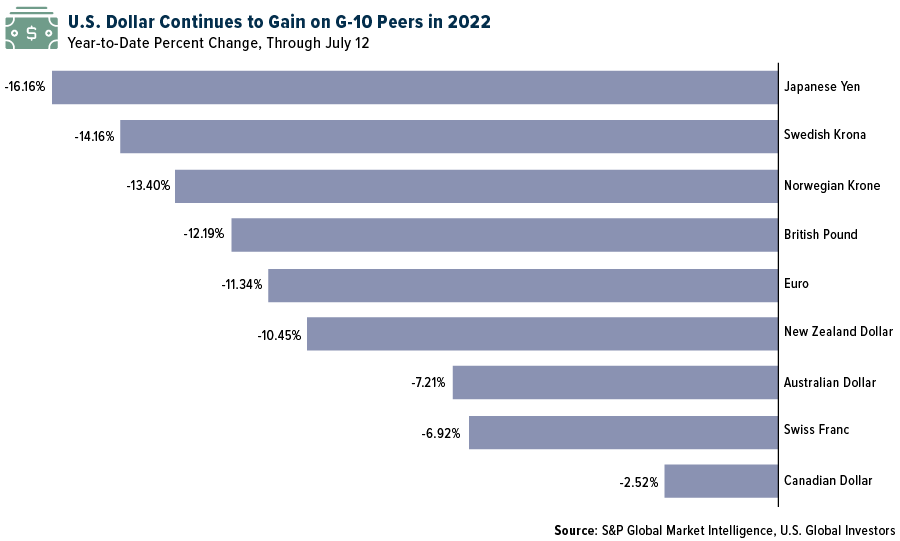 A stronger Dollar is favorable not only for Americans traveling abroad but also companies that pay to import goods from other countries – think big-box retailers such as Walmart, Target, Home Depot and Dollar Tree.
On the other hand, a soaring Dollar can hurt US exporters since it makes goods more expensive to foreign buyers, dampening demand.
Between January and May of this year, the top US exports by end-use included crude oil and petroleum products, mostly due to the massive increase in crude prices. Other top exports included pharmaceuticals, industrial machinery, semiconductors, automotive parts and accessories, fuel oil, automobiles, natural gas and plastic materials, according to Bureau of Economic Analysis (BEA) data.

The single largest US exporter in value terms is Boeing. The massive aerospace company, which recently moved its headquarters to Arlington, Virginia, faced a wave of order cancellations stemming from the tragic 2018/2019 crashes involving the 737 MAX, but orders look to be picking up again.
Boeing reported stellar delivery results for the second quarter, with 51 aircraft delivered in June alone. That's the company's best month since March 2019.
I will be curious to see if Boeing executives address the impact of the stronger Dollar when the company reports second-quarter financial results later this month.
Among the biggest victims of King Dollar's strength is gold, which, like most commodities, is priced internationally in the greenback.
The yellow metal has long been valued as a safe haven during times of economic uncertainty and high inflation, which we're certainly facing today. June's consumer price index (CPI) came in at a scorching annual rate of 9.1%, the highest in over 40 years, but if we use the inflation methodology from 1980, the figure is closer to 17% or more. 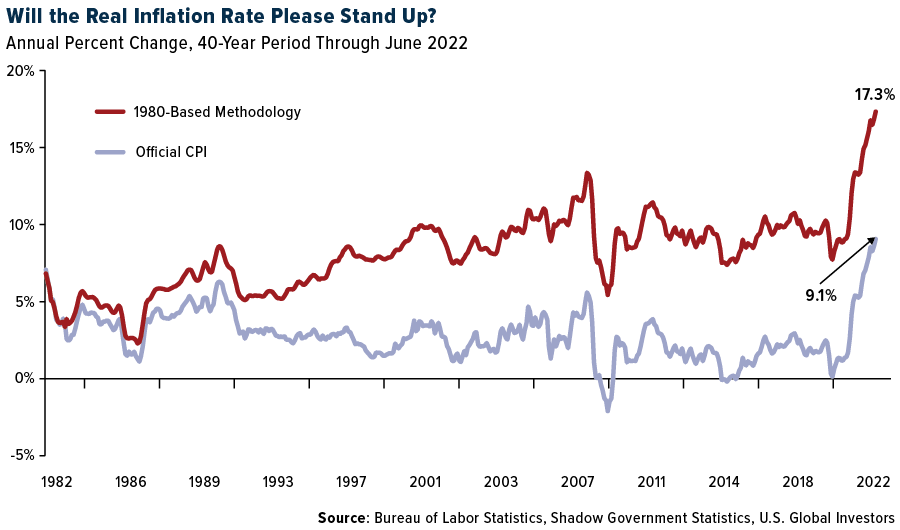 Despite this, gold has steadily fallen since its 2022 high of $2070 per ounce, set in early March. As of today, gold is off close to 7% for the year, and it has briefly traded below $1700 for the first time since March 2021. Based on the 14-day relative strength index (RSI), the metal looks incredibly oversold at around 23, the lowest it's been since August 2018.
In addition, gold has signaled a "death cross," which occurs when the 50-day moving average dips below the 200-day moving average.

Some investors and traders see this move as a bearish sign. I see it as a buying opportunity. If you believe that the Dollar is overextended relative to other currencies, and that a reversal could happen in the coming weeks and months, now may be a good time to accumulate, especially if you think we're in the midst of a recession.
I've shared with readers a couple of times that we may very well be in a recession already, based on the Atlanta Federal Reserve's GDPNow real-time forecast. The latest forecast, as of last Friday, is that the US economy contracted 1.5% in the second quarter, following an annual decrease of 1.6% in the first quarter.
Even if that ends up not being the case, the bond market is telling us that a pullback may be imminent.
A yield inversion occurs when the shorter-term Treasury bond trades with a higher yield than the longer-term Treasury. Remember, bond yields go up when prices go down, so when yields invert, it suggests that investors find shorter government notes riskier to hold than longer-dated ones.
Inversions have been extraordinarily accurate at predicting recessions. Going back at least 40 years, every recession has been preceded by an inverted yield curve, using the two-year and 10-year Treasuries.
Not only is the yield curve inverted right now, but it's inverted at the biggest point since the year 2000, soon before the dotcom bubble burst. 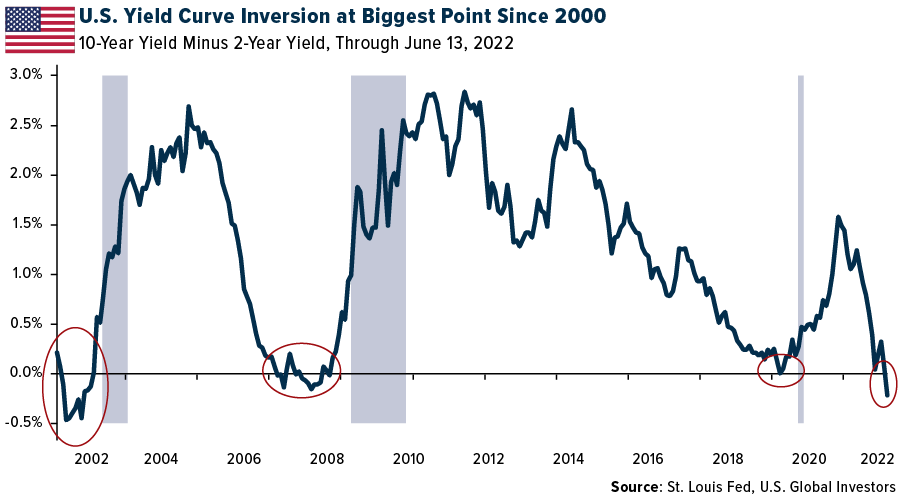 So what does this mean? Past performance is no guarantee of future results, but we could be looking at a pullback, if not this year then the next.
More specifically, stocks and other risk assets may not have found a bottom yet. From its all-time high in early January, the S&P 500 has fallen 20%, but historically it's dropped as much as 35% on average when a bear market coincides with a recession.
Do with that information as you wish, but I believe it's wise and prudent to have exposure to gold at this time, between 5% and 10% of your portfolio.