END_OF_DOCUMENT_TOKEN_TO_BE_REPLACED

Gold has remained weak in real terms and strength in the gold stocks and silver has been rather muted. In short, the lack of much stronger performance in the face of US Dollar weakness bodes for increasing downside risk over the near term. 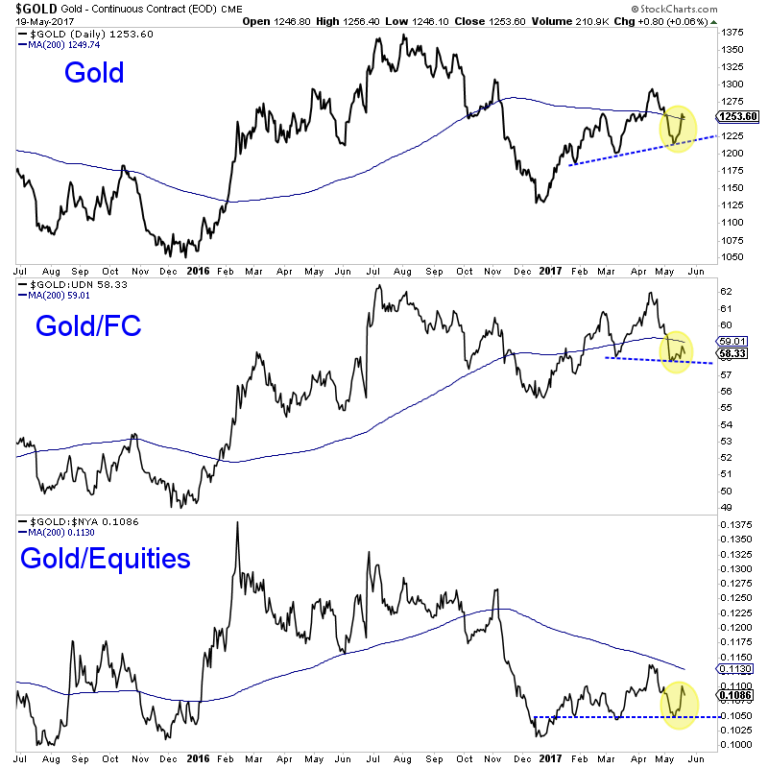 As the chart shows, gold has been weak when measured against foreign currencies and equities. Gold's recent strength has been driven entirely by Euro strength and not due to falling real interest rates, its primary fundamental driver.

Macron's win in France coupled with recent strength in European markets has supported what was an oversold and depressed Euro. This has supported gold in US Dollar terms but only in those terms.

Even in Dollars, gold remains well below its spring high near $1300 despite the US Dollar breaking its spring lows to the downside. In addition, gold remains rather weak relative to foreign currencies and equities. The one hope for gold would be a falling stock market and sustained strength in the gold/equities ratio. While I expect that eventually, I do not think it is in the cards yet.

Turning to the gold mining stocks, we see immediate downside risk as the miners appear to have completed their oversold bounce. Over the past few weeks GDX and GDXJ rallied 13% and 17% respectively and retraced a good chunk of their April decline. However, they now appear ready to decline into June and the upcoming Fed meeting. 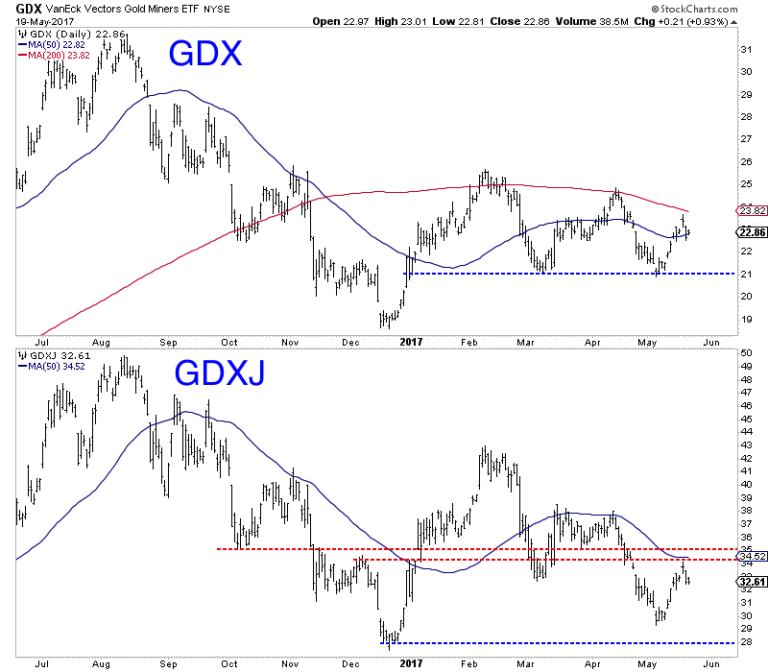 For the first time in months, GDX was unable to touch its 200-day moving average, which is already sloping down. Support for GDX is at $21 and $18-$19. Meanwhile, GDXJ peaked at its 50-day moving average and strong resistance at $34-$35. Its next strong support level is the December 2016 low.

The greenback fell to a 6-month low yet the entire complex (ex-gold) is nowhere close to 6-month highs and remains well below 200-day moving averages.

This is a warning sign as the sector could be quite vulnerable to a rebound in the US Dollar. We continue to wait as we expect lower prices and a good buying opportunity in select juniors at somepoint this summer.