END_OF_DOCUMENT_TOKEN_TO_BE_REPLACED

Which is lucky. As miners are NOT discovering much gold anymore...

RECENTLY I was in Louisiana, where the mighty Mississippi River meets the tide, writes Byron King in Addison Wiggin's Daily Reckoning.

There, I attended the New Orleans Investment Conference, the granddaddy of all hard asset get-togethers, founded by the late Jim Blanchard.

The long-running focus of the New Orleans conference is precious metals and energy. It was a great conference, and there's much to tell you.

First, allow me to pay a compliment to the New Orleans conference. It has long been one of the great ones in a world of "too many" conferences. The New Orleans fest was founded by the late Jim Blanchard, whose Herculean efforts back in the 1970s led to Congress passing a law that allows individual Americans to own physical gold.

Think about that. In 1933, newly-elected President Franklin Roosevelt issued Executive Order 6102, commanding that Americans turn in gold coins and bullion to banks in exchange for paper cash. Then banks transferred the gold to the US Treasury.

In 1934, FDR rammed the Gold Reserve Act through Congress, which outlawed almost all private holding of gold in the US It was not until 1974 – about 40 years later – that Americans were again allowed to own gold.

It's a long story (not here), but the short version is that Jim Blanchard was a key player in changing US law in 1973 to allow for private holdings of gold. Talk about fighting city hall! Blanchard took on the legacy of FDR, Congress, the US Treasury and a tidal wave of know-it-all anti-gold opinion. If you own gold as an American citizen – and I sure hope you do! – then thank the memory of Jim Blanchard.

Any way you look at it, the long-term forecast for gold is up. Yes, we see day-to-day swings in price, up and down. We see broader trends too, over medium-term time frames – meaning price moves in which gold drifts upward and then pulls back. But over time, physical gold is a rock-solid investment that tends at least to track inflation, and even well outpace inflation during times of monetary crisis.

In other words, gold is "generational" wealth preservation.

Look at gold from the supply side. Several New Orleans speakers made the obvious point that you can't mine what you don't discover, and gold discoveries have all but fallen off a cliff in recent years. The last of the world's great, massive gold discoveries were in the 1980s, with some "not bad" years in the mid-2000s. Yet it takes about 20 years to go from discovery to actual production – just check out the chart below. 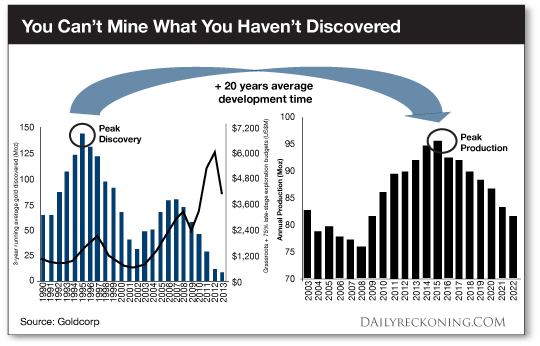 Right now we're in the midst of a production bloom, which is nice, but it's based on past discovery.

Looking ahead, it's possible to forecast lower global output in years to come, based on cumulative industry knowledge of output targets, mine openings/closures, capital investment and more. Indeed, per the chart, it's fair to say that gold output has peaked and we're now on a downward production slope.

Sad to say, you can't frack for gold.

It's not just a question of the proverbial "do more investment," either. I can't stress enough that first, you need to find ore in the ground. And that has NOT been happening – well, not "enough" ore, and that's been the case for many years.

Thus, the resource base – and mineable reserve base – is simply not there, no matter how much money anybody throws at the problem. You can't solve this mining/production problem with more mere money, in other words. You need gold, and people haven't been finding any big new discoveries.

Now for some worse news. That is, gold price gyrations of recent years have "destroyed" many previously established gold resources. That is, gold atoms are still gold atoms, and they're not destroyed. But those gold atoms are emplaced within a rock somewhere. The idea of supply is to mine that rock – we call it ore – and process it to recover gold. Yet this also has to happen in an economical, "engineering" sort of way.

For example, suppose you have an ore body with high grades of gold in some areas and lower gold concentrations in other areas – pretty typical, actually. Good practice is to mine high-grade material and mix it at the crusher and smelter with lower-grade material. That way, the average cost to recover gold makes it worthwhile to go after the lower-grade material.

Now suppose that gold prices drift down – well, you don't need to suppose it, because that's the case of late. Mine operators everywhere have been using more and more high-grade ore to recover gold and pay their costs. This means that more and more low-grade material remains in the ground – where now it may NEVER pay to mine it out and recover it. Thus, many miners are writing down company resource estimates, due to "high grading" that essentially "chokes" an ore body. In a sense, it's discovery in reverse.

Another major source of "missing" world gold supply is China. Jim Rickards gave an excellent talk in New Orleans and hit on this exact point. In essence, China does not export gold, and also imports plenty.

Meanwhile, Chinese gold imports are large and widespread. The Chinese government buys gold, as does Chinese industry. Chinese consumers buy gold too, at the retail level. Gold imports flow to China from the US, Europe, Australia, Africa and more – to include China's Hong Kong portal. When you add it all up, China likely has in the range of 5,000 tonnes (or more) of gold within its borders, yet the "official" reported reserves are but a fraction of that.

Point is that China is accumulating gold without fanfare. It makes sense, because China would be foolish to warn gold markets that it's buying big-time and thus run up the price. But the fact is that China is buying gold, which is likely intended for some downstream time when the next currency crisis hits. China will be prepared. Are you?

As an investor, you want to understand what's going on in gold markets and be ahead of the curves – less gold supply, more looming demand and – eventually – higher prices. Yet you also need to understand that many other things are going on in investment-land, and there's no one-size-fits-all solution to success in preserving wealth and growing your nest egg.

Pretty much every speaker at New Orleans (not all, though) believes you ought to own physical gold – it's a basic part of any balanced portfolio. And it IS basic – no fancy numismatics and collectibles and such. These latter items are a completely different level.

How much gold should you own? I heard numbers like 5-10% of your portfolio. Right now there's no need to go out and buy a whole whack all at once. Accumulate over time. Buy the dips, of course. But over time, buy and build your stash. Keep it quiet.

Next come gold mining shares. If you don't own any gold miners – and after the recent terrible share price performance of the sector, that's understandable – one good way to get back into the sector is with an exchange-traded fund (ETF).

It's been a long and dreary ride, but there is hope on the horizon, so keep yourself ahead of the rest and be ready for what the future has in store.