END_OF_DOCUMENT_TOKEN_TO_BE_REPLACED

Nothing to see here...
CORRECTIONS in gold and gold mining stocks are completely normal in an inflationary macro market phase, writes Gary Tanashian in his Notes from the Rabbit Hole.
Yet every week I notice the agony ratcheting up incrementally. While the rest of the casino takes off to the speculative heavens, gold sits on its heavy ass and the gold miners go nowhere in a downward-biased perma-correction.
Or so it seems. It's all normal and I'll explain why.
First of all, it is not healthy to be railing against unseen nefarious manipulative interests. That is emotion and emotion has to be kept out of it (and yes, I get as aggravated as the next guy sometimes, but it cannot affect your plan or you will be the victim, the mark).
You have to take what the market gives you and roll with it. All markets are manipulated when you consider that the greatest manipulation of all is courtesy of the Federal Reserve, implementing its MMT (Modern Monetary Theory)...err, that is TMM (Total Market Manipulation)...toward desired ends.
The primary tool in that manipulation is inflation. The oldest trick in the Fed's book. But they can only inflate under cover of a deflationary macro and the 2020 Covid-crash made that the story and as yet it's a condition that keeps on giving license to the inflators.
Very likely sometime in 2021 our indicators will signal a failure into another deflationary liquidation or a more intense inflationary problem, neither of which would be positive for the economy.
One of many indicators showing that it's still inflation 'on' – and thus, reflation 'on' – and thus, risk 'on' – is the 30-year bond yield, which has hit a minor caution zone but which also shows potential inflationary upside, limited though it may be.
I am not going to explain the chart's implications in detail as I do in NFTRH, but a good look at it will probably give you the clues you'd need. 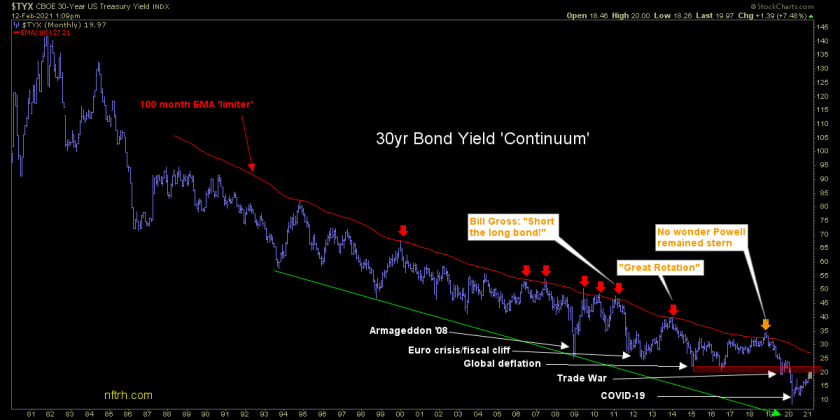 The macro backdrop is inflationary. We picked up on it early on and now everyone and his grandma knows it.
One thing I've been talking about since the gold sector topped out in August under the 'Buffett Buys a Gold Stock!' contrary indicator signal is that we need to tune out any gold stock promoters touting the miners as protection against inflation. The miners can rise during inflationary phases as the 2003-2008 phase clearly proved, but they can and will also go on nearly interminable corrections.
This chart clearly shows corrections ranging from many months to nearly two years within the ongoing gold stock bull market during the 2003-2008 inflationary bull market that was led by gold but ended up lifting inflated rafts of commodities and stocks as well. Notice how HUI corrected in 2002 as commodities made their first move off the bottom. Look familiar? I thought so. It's normal, this correction in gold stocks.

For visual effect let's resurrect the Macrocosm, which is my way of portraying the proper fundamentals for the gold stock sector.
See how tiny the inflation and inflation expectations planets are? Again, normal.
Gold is declining vs. commodities and stocks and that is negative. Hopes that the Fed will inflate the economy (actually, they will just inflate assets, increasing the already gaping wealth gap) with perma monetary policy that will fuel fiscal policy have neutered the economic contraction play for now.
The lone positive for gold and gold stocks right now is the steepening yield curve. But that alone is not going to do the trick.

Gold miner stocks are correcting for valid reasons, only one of which is that this notoriously over-touted sector needs to have its enthusiasm drained periodically – especially in a bull market – in order to be healthy enough for significant new rallies.
In this case health means quiet, as in crickets, where once loud bull horns had been blaring.
The monthly chart above of the HUI gold-mining stock index shows a normal correction during an inflationary phase with the blueprint to normal being the 2003-2008 inflationary phase.
Gold too is and has been normal since it topped last summer and we noted that a proper Handle would require a months-long grind per this post from September. So at least to our analysis, gold is normal. Try to tune down conspiracy theories and I beg of you, don't act on them!
A proper Handle is being made to gold's bullish Cup. That's all that is happening and it is normal.