END_OF_DOCUMENT_TOKEN_TO_BE_REPLACED

Lockdown slump sees households sell gold jewelry to raise cash...
The GOLD BULLION market is set for a flood of recycled supply from Asian households selling jewelry and taking profit in coins and small bars as the precious metals sets new all-time highs in a raft of currencies amid the global coronavirus pandemic.
"Because the price is so high, you'll get a lot of recycling from people who bought at $1100 or $1200 as we're now at $1700," says Dr.Fergal O'Connor, lecturer in finance and economics at University College Cork (UCC), speaking last week with Professor Brian Lucey at Trinity Business School, Dublin.
"But that's normal. You get a price run up, and one of the brakes that comes in to slow gold's price increases is this inflow of gold from secondary markets."
Reaching 8-year highs against the US Dollar, gold bullion has this April come within touching distance of its all-time records in Chinese Yuan and Japanese Yen, and set new all-time high prices in Thai Baht, Malaysian Ringgit, Singapore Dollars, and South Korean Won.
Sales of gold by existing jewelry owners worldwide – known as 'scrap' or 'recycling' flows in the bullion industry – show a strongly positive relationship with changes in the gold price.
Mine output, in contrast, shows a firmly negative relationship with prices, averaging a rolling 4-quarter correlation of -0.46 against scrap's +0.75 reading.
That figure would read +1.0 if levels of scrap sales moved absolutely in lockstep with prices, or -1.0 if perfectly opposite.
Typically matching one-third of global gold mine output each year, scrap gold jumped to 29% during the 1998 Asian economic crisis, and averaged 38% across the global financial crisis of 2008-2012. 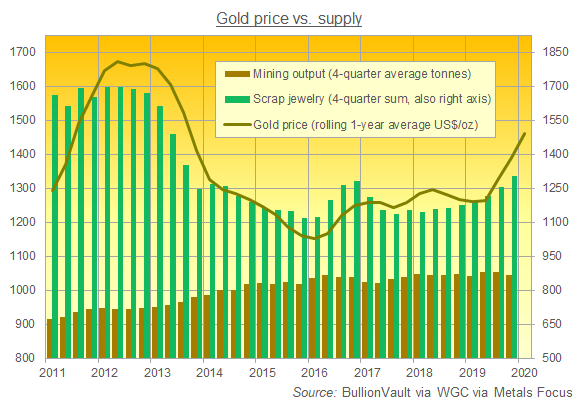 "I'm asking people to sell gradually, not in large amounts, as shops may face a cash crunch," said Thailand's prime minister Prayuth Chan-Ocha earlier this month after long lines of people formed to sell gold across the south-east Asia nation.
Elected in 2019 after 5 years ruling Bangkok's junta following a military coup, Prayuth has promised monthly aid worth around $150 for some workers, but "issues with [the government's] database system have seen it disqualify many applicants," reports the South China Morning Post.
"2020 is shaping to be worst for the Thai economy since the 1998 Asian financial crisis," according to economists at Dutch bank ING.
Heavily dependent on tourism, Thailand's economy already slowed in 2019 to the weakest GDP growth in 5 years as the rise in gold prices spurred heavy profit-taking among consumers, with the resulting exports of bullion driving large inflows of cash which drove up the Thai Baht to the best-performing currency in Asia.
"Despite the recent spike in exports," Reuters reported last summer, "Thailand has still imported a net $43.6 billion of gold since 2009."
"Thai people have invested a lot in gold, and whenever gold prices go up globally, they sell the gold that they bought earlier," the newswire quoted Bangkok's central-bank governor Veerathai Santiprabhob.
"Thailand is operating smoothly, they only have curfew at night," reported Albert Cheng, former World Gold Council director Asia and now CEO of the Singapore Bullion Market Association (SBMA) last week.
"[But] Malaysia like Singapore is totally closed down, and so jewelry and retail stores cannot open," Cheng told former ICBC Standard Bank Tokyo manager and now CEO of the Japanese Bullion Market Association (JBMA) Bruce Ikemizu in a videocast.
"Vietnam retail shops and jewelry shops are closed, but banks remain open and also some bullion shops," said Cheng, while Japan's biggest gold retailer Tanaka Kikinzoku has closed all its stores, with new purchases available by telephone but customer re-selling suspended "as the company needs to examine the metals before purchasing them from customers," according to Reuters.
Gold's top 2 consumer nations China and India – from where exports of gold bullion bars are illegal – have meantime seen local gold prices go to steep discounts below London quotes, pointing to very weak domestic demand against ample supplies.
Hit first by the novel coronavirus, and then imposing lockdown to extend end-January's Lunar New Year holidays, China vanished from the UK's gold-export data for February, where it normally comes in the top 3 destinations for bullion bought and shipped out of London, the world's central storage and trading hub for precious metals.
"India [gold demand] is also likely to struggle given that it was already in the midst of slower growth," says specialist consultancy Metals Focus.
"This is in contrast to the 2008-09 global financial crisis when India was relatively unscathed."
Last year's weak growth, high gold prices and additional duty costs on bullion conspired to drive India's household demand to its lowest in a decade.
"A meaningful recovery [in India's gold demand] is only likely to be seen during H2.19, which will carry over into 2021 as weddings scheduled for Q2 and Q3 are postponed until Q4," says Metals Focus, "when the peak wedding season begins."
With gold priced US Dollars now at 8-year highs – and setting fresh records in British Pounds and Euro terms – "We're back to cash-for-gold prices," says Dr.O'Connor at UCC, "but I'd say in the West there isn't so much gold [jewelry] around in the first place.
"Asian consumers [in contrast] rebuilt their holdings as prices went down after 2011, going on a buying spree."