END_OF_DOCUMENT_TOKEN_TO_BE_REPLACED

So let's see...Where does that lead us? asks the Daily Reckoning's Eric Fry.

A) Berkshire Hathaway invests in productive businesses and;

B) Investing in productive businesses is civilized and;

D) Buffett and Munger are civilized.

But to make sure the world appreciates just how civilized these two civilized gents are, they continuously (and very publicly) belittle both Gold Bullion and the uncivilized masses who consider it a store of value.

"Gold gets dug out of the ground," Warren Buffett famously observed, "then we melt it down, dig another hole, bury it again and pay people to stand around guarding it. It has no utility. Anyone watching from Mars would be scratching their head."

Yes, that's right, anyone from Mars...or from Berkshire Hathaway headquarters. But most of the other seven billion folks residing on either Earth or Mars understand that gold has at least some utility. At a minimum, they understand that Gold Bullion possesses more utility than the gold-bashing blather that spills from the lips of Buffett and Munger. Gold may be inert, but at least it's not toxic.

"When it comes to bashing gold," writes Eric McWhinnie for Wall St. Cheat Sheet, "few do it as publicly and extremely as the crew at Berkshire Hathaway...Buffett dedicated a decent part of his latest shareholder letter to criticizing gold. He painted an analogy of the world's gold stock as a useless cube that would fit within a baseball infield. Buffett wrote:

Today the world's gold stock is about 170,000 metric tons. If all of this gold were melded together, it would form a cube of about 68 feet per side. (Picture it fitting comfortably within a baseball infield.) At $1,750 per ounce — gold's price as I write this — its value would be about $9.6 trillion. Call this cube pile A.

Let's now create a pile B costing an equal amount. For that, we could buy all US cropland (400 million acres with output of about $200 billion annually), plus 16 Exxon Mobils (the world's most profitable company, one earning more than $40 billion annually). After these purchases, we would have about $1 trillion left over for walking-around money (no sense feeling strapped after this buying binge). Can you imagine an investor with $9.6 trillion selecting pile A over pile B?

Ummm...maybe...depending on the circumstances in which one finds oneself.

Even Charlie Munger acknowledges that "gold is a great thing to sew onto your garments if you're a Jewish family in Vienna in 1939." Although Munger's tasteless remark was an attempt to disparage gold, he inadvertently paid the monetary metal a compliment. He acknowledged that gold is the "go to" investment during times of crisis. It is the thing to own in uncivilized times.

Clearly, Gold Bullion was not the very best thing to own when the young Buffett and Munger were launching their careers — a period that happened to coincide with America's post-WWII, once-in-an-empire, economic boom. At the end of the Second World War, the United States possessed a robust manufacturing infrastructure; its competitors possessed rubble. Not a bad time to invest in America's "productive businesses."

But not every investor will find himself in the midst of one of the most powerful, world-dominating economic expansions in human history. Instead, some investors may find themselves in some sort of "Vienna, 1939." In such circumstances, the ideal investment may not be a share of Coca-Cola...or even a share of Apple (more about which below). It may be an ounce of gold.

"Some Jews in Vienna in 1939 operated extremely productive businesses," we observed last month. "Unfortunately, they could not stitch any of those into their garments."

Thus, as we never tire of observing, gold has delivered a much higher return during the last 15 years than Berkshire Hathaway, perhaps the most civilized of American stocks. By any quantitative measure, gold has kicked Berkshire's rear-end from wherever you happen to be reading this column all the way back to Omaha, Nebraska. 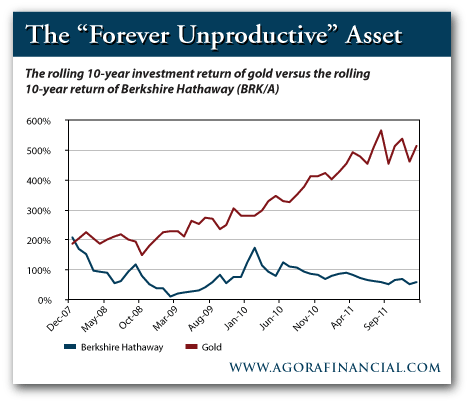 Unlike Buffett and Munger, David Einhorn, founder of Greenlight Capital, believes we Americans are in an era in which gold is likely to reward those who hold it. He recently countered Buffett's "analysis" of gold by saying, "If you wrapped up all the $100 bills in circulation, they would form a cube about 74 feet per side... The value of all that cash would be about a trillion Dollars. In a hundred years, that money will have produced nothing... It will not pay you interest or dividends and it won't grow earnings, though you could burn it for heat... Alternatively, you could take every US note in circulation, lay them end to end, and cover the entire 116 square miles of Omaha, Nebraska. Of course, if you managed to assemble all that money into your own private stash, the Federal Reserve could simply order more to be printed for the rest of us."

Einhorn's dig at the Berkshire boys is merely his latest counter-punch against the anti-gold elite. A few weeks back, he likened Fed Chairman Ben Bernanke's monetary policy to gorging on jelly donuts.

"My point," Einhorn elaborated, "is that you can have too much of a good thing... Chairman Bernanke is presently force-feeding us what seems like the 36th jelly donut of easy money and wondering why it isn't giving us energy or making us feel better. Instead of a robust recovery, the economy continues to be sluggish..."

"As a result," Einhorn concluded, "I will keep a substantial long exposure to gold, which serves as a jelly-donut-antidote for my portfolio."

Like Einhorn, many other high-profile hedge fund managers are amassing large quantities of gold and gold-related investments. According to filings with the Securities and Exchange Commission, several big hedge funds upped their allocation to gold during the first three months of 2012. Billionaire fund manager John Paulson, for example, maintained his large 17.3 million-share position in the SPDR Gold Trust (GLD). He also upped his holding of NovaGold Resources and IAMGOLD.

Those guys aren't Buying Gold because they expect it to be "forever unproductive," as Buffett asserts, or because it is only useful during a Nazi occupation, as Munger asserts. They are buying it because they believe the American economy of the near-future will not treat investment capital as hospitably as the American economy of the last several decades.

Time to Buy Gold? Visit BullionVault and start building your own gold stash with a free gram of pure Gold Bullion...