END_OF_DOCUMENT_TOKEN_TO_BE_REPLACED

Some things to remember amid the volatility of the gold price...

WHEN VOLATILITY prevails in the gold market, I love seeing so many different opinions because it promotes critical thinking and healthy markets, writes Frank Holmes, CEO and chief investment officer of US Global Investors.

But because gold is unlike any other commodity, many perspectives can be extreme, such as "goldenfreudes" who take pleasure in gold bugs' pain.

I continue to persuade readers to take a balanced and thoughtful approach to the yellow metal. With this in mind, here are four facts to remember about gold that should help neutralize those extreme bullish and bearish views.

And research has found that the price of gold moves in near-lockstep to each increase in the Fed's balance sheet.

Even with the incredible two-day drop in gold prices, US Global portfolio manager Ralph Aldis calculated that the correlation between the rise in gold and the US balance sheet is 0.96. Perfect correlations of 1 are extremely rare in markets, but gold and the balance sheet have moved in sync with each other since 1999, before gold's bull run began. 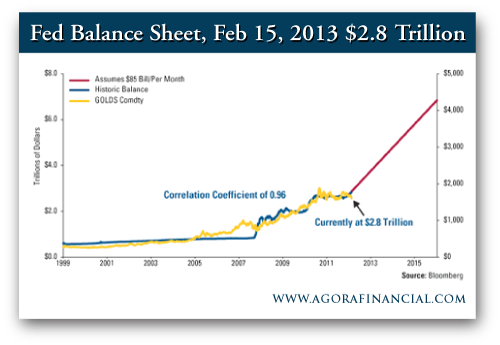 2. Gold is viewed as a currency by central bankers

As gold was falling on April 15, Carl Quintanilla from CNBC asked me what I thought about how investors viewed currencies. I feel investors should look at how central banks around the world are viewing their own reserves. Although Cyprus and Italy were possibly forced to sell their gold holdings to pay down debts, take a look at the actions of emerging countries central bankers who are scooping up gold.

The World Gold Council (WGC) reported that in 2012, central banks purchased 535 tons when only a few years ago central banks were net sellers of gold. And it's important to keep in mind that these central banks love these corrections, as they can purchase gold at cheaper prices.

Russia bought 75 tons, bringing its gold holdings to the seventh largest in the world, with about 1,000 tons. Last year, Brazil, Paraguay and Mexico purchased gold, as did South Korea, the Philippines and Iraq.

Turkey is another country that has been building reserves, though not from purchases. Rather the WGC says its growing gold reserves "reflect the increasing role that gold plays more broadly in the Turkish financial system as these reserves are substantially pledged from commercial banks as part of their required reserves."

While the tonnage is only a fraction of the overall gold market, it is widely acknowledged that central banks are building their supplies of gold as a means to diversify their holdings away from the US Dollar and the Euro. As a percent of total reserves, many of these emerging countries mentioned above own very little gold. In fact, Pierre Lassonde, chairman of Franco-Nevada, has noted that even if emerging market central banks wanted to increase their gold reserves to 15 percent of total reserves, they'd have to buy 1,000 tons every year for the next 17 years! 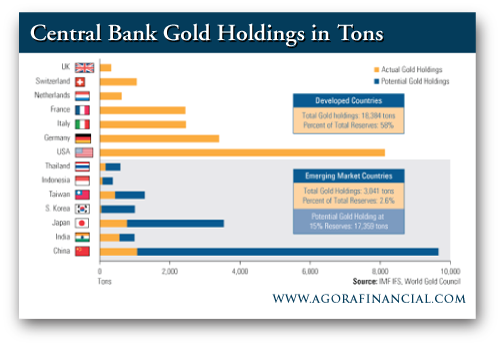 3. A lack of love from the Love Trade is affecting fundamentals

Too many people focus on the Fear Trade, which is when investors buy gold coins or a gold ETF out of a fear of the fallout that may result from governments' rising debt levels and weakening currencies.

The Love Trade, on the other hand, is the buying of gold out of an enduring love for gold. Two emerging countries that make up almost half of gold demand—China and India—have had a long relationship with the precious metal that is intertwined with their culture, religion and economy. With half of the world's population buying gold for their friends and family, it's important to put into context what is happening in their countries.

This is very important to gold, as China's income growth has been shown to be highly correlated to the price of the precious metal over the past decade. 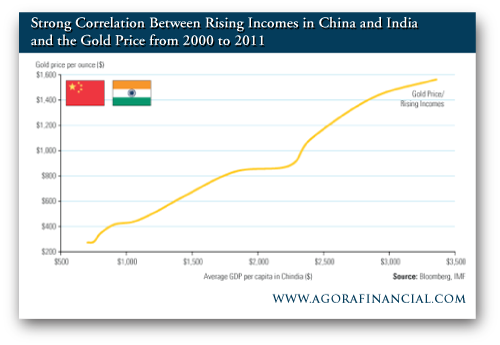 China's weaker GDP also disappointed gold investors, but I believe this is only a temporary setback. It's only a matter of how fast China will move to stimulate the economy, since this is a key to global growth.

In India, gold consumption has been hurt by both a weak rupee and government taxes on imports. In the first quarter of 2013 alone, gold imports declined 24 percent, according to Mineweb.

As of mid-April, the gold price on a year-over-year percentage change basis registered a -2.6 standard deviation. While minor corrections in the gold price happen frequently, a move this severe has never occurred before over the previous 2,610 trading days. 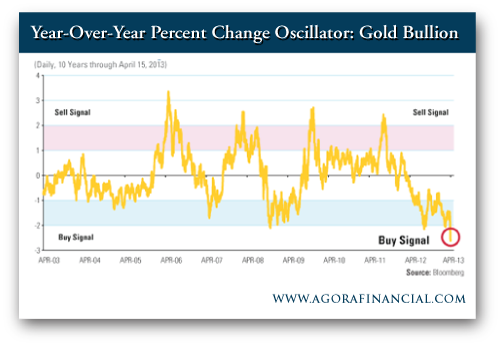 With gold's standard deviation drastically below the "buy signal" blue band, we consider the yellow metal to be in an extremely oversold position on a 12-month basis. The probability that gold will move higher over the next several months is high.