END_OF_DOCUMENT_TOKEN_TO_BE_REPLACED

Some big money continues to migrate into Gold Bullion...

OVER THE past few years investors have been flocking to gold and silver, notes Outstanding Investments editor Byron King, writing at Whiskey and Gunpowder.

It's a worldwide trend. There's a money migration going on. And I mean BIG money is migrating. It's like those herds of zebras or wildebeests or gazelles in Africa. When they migrate, the earth shakes and the ground is just a moving kaleidoscope of hides and footprints. The dust clouds blow high into the sky.

Yes, the world economy might be in a recession. People across the world are worried about their job and security for their family. But other people with big bucks are scooping up gold and silver. Those buyers are looking for investment safety, they want to protect and grow their wealth.

Moneyed investors don't trust the world's governments or paper currencies (just look what's happened in the Eurozone in the past few years.) So they are going with gold and silver. The mines and mints are having trouble keeping up with demand. Exchange-traded funds (ETFs like, for example, SPDR Gold Shares (NYSE: GLD) and iShares Silver Trust "SLV") are buying huge volumes of gold and silver.

Who ever heard of a Gold ETF until just a few years ago? But by the end of 2008, gold holdings of ETFs reached a record level of 1,090 tonnes. Today, according to a July report from Bloomberg that number more than doubled, to 2,188 tonnes. Thus, ETF holdings now exceed those of China, Switzerland, Russia and many other large and important nations. These are astonishing levels of demand, where there was almost none just a few years ago.

Just for comparison, here are the approximate gold holdings of a list of major countries, plus the International Monetary Fund (IMF) and the European Central Bank (ECB). Wow! 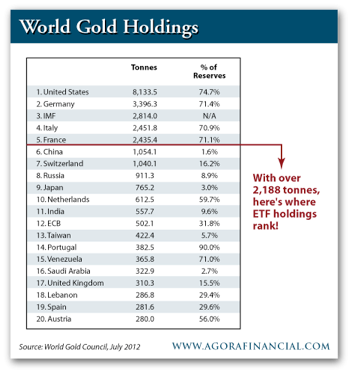 Individual investors through the ETF's hold more than quadruple that of the European Central Bank. To say the tides are turning is an understatement — this lends even more reason for you to get your hands on some physical metal.

Much of the gold in the vaults of the worlds' central banks has accumulated over many decades. Much of the US government gold reserve, for example, dates from the national gold confiscation of 1933 under President Franklin Roosevelt. Roosevelt had a compliant Congress to do his bidding. Eventually, even the Supreme Court backed him up. So what's that old expression? "It CAN happen here."

Many other countries of the world are currently Buying Gold, fresh from the mine. Today, China is the world's largest gold-producing nation, and its central bank is buying and building reserves. Russia, too, has a tradition of holding gold and today is acquiring gold from its own mine output and via purchases on international markets. India is following the same uptrend.

Even countries like Qatar, a small nation in the middle of the Persian Gulf are adding to their gold reserves. What do the Chinese, the Russians, Indians or the Qataris know? They know that they want gold. They can buy it. They will hold it. And they are hoarding it.

I like holding metals as an investment and I just like the feel of the stuff. At the "elementary" level, you can hold physical metals. If you've never felt the coolness and heft of a shiny gold $50 Eagle or a Canadian Maple Leaf in your hand — let alone a fine old specimen of a $20 coin from the days of old in the US — you've missed something. Really, the only thing better than holding an Eagle or Maple Leaf is holding an entire roll of 20 of them.

A few years ago, on a trip to South Africa, I visited a refining operation and actually picked up a gold brick. It was almost right out of the melting pot. The brick was still warm, and the darn thing weighed about 75 pounds. There I was, in South Africa holding over 1000 ounces of gold fresh out of the mine.

At today's price around $1600, I was holding over $1.7 million. That's what I call "useful weight gain." Too bad I couldn't bring it home with me (the armed guards at the refinery would have had a say, I'm sure.)

I've never made a formal recommendation for buying a particular kind of gold or silver coin, or ingots from this mint or that or any such thing. Those kinds of gold purchases are too hard to track in a newsletter.

So traditionally I've recommended gold and silver miners and their shares. But after reading this, I hope you have the chance to acquire some real metal for your portfolio.

Buy and own secure Gold Bullion – stored in your choice of vaulting locations – and pay the lowest possible prices with BullionVault...