END_OF_DOCUMENT_TOKEN_TO_BE_REPLACED

IF YOU keep a diary, put a star in the corner for today's entry, writes Daily Reckoning Australia editor Dan Denning.

Ten years from now, you'll look back on this day and be amazed at what people were saying. What will be even more amazing is that some people were doing exactly the wrong thing at the right moment. More on that below.

First, the facts. The US Dollar gold price fell another 9.84% in yesterday's US trading. Its two-day loss of 13% is the biggest in thirty years. And so far this morning, the loss continues. Gold is falling like a stone.

It's not alone either. The S&P 500 fell by 2.3%. The Dow Jones Industrials had its biggest one-day loss since the US election in November last year. Within the S&P sectors, materials and energy both fell by nearly four per cent. What's going on?

The fall in the materials and energy sectors was not matched by the finance sector. Financial stocks were down, but not nearly as much as anything commodity related. That's worth noting. There are at least some sectors of the market taking note of underlying events in the real economy.

Energy and materials are not sectors likely to be driven by enthusiasm for more quantitative easing by the Federal Reserve. In fact, the fall in commodities and most of the stocks in extractive industries can be seen as a market repudiation of the healing power of QE. It may be pumping up financial stocks and financial earnings, but it's doing a whole lot of nothing for the well-being of the real economy.

Gold is currently in the grip of an epic liquidation. Who is selling and why? Those are interesting questions. But ultimately, both are unknowable. It could be leveraged hedge funds who were long gold, or who used gold as collateral to lever up on stocks. It could be owners of large positions in ETFs. It could be manipulation. It could be panic. Yet look at the chart below. 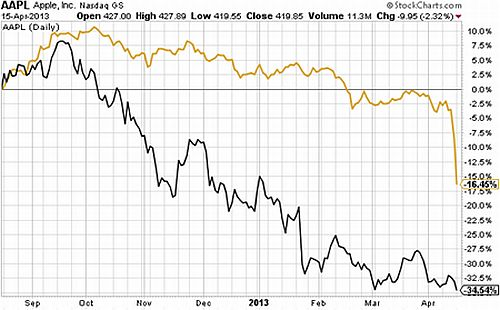 Shares in Apple are down 34.54% in the last eight months. After the last two days, the gold price is down 16.45%. Which has crashed? Or have both simply corrected? Our friend Marc Faber made this point (the inspiration for the chart) in an interview with Bloomberg TV. Dr Doom said:

'I love the markets. I love the fact that gold is finally breaking down. That will offer an excellent buying opportunity. I would just like to make one comment.

'At the moment, a lot of people are knocking gold down. But if we look at the records, we are now down 21% from the September 2011 high. Apple is down 39% from last year's high.

'Nobody knows for sure but I think the fundamentals for gold are still intact.'

What are the 'fundamentals?' That gold is an asset which is no one else's liability, for starters. Beyond that, the last month has provided you with evidence that in a pinch, the political and monetary authorities will confiscate your savings. Central banks across the planet continue to print money and monetize government debt. These are all facts too.

Take all the emotion of wild price swings out of it, if you can. Ask yourself whether you think paper money will gain or lose value over the next ten years. And then ask yourself if you would rather have money in the bank or precious metals in your hands. The answers will tell you all you need to know.

Besides, speaking from experience, this is the first time in almost ten years we can remember gold being a hated asset. It was hated in the early part of the decade for all the same reasons: it had no real economic use...it produced no yield but held storage costs...it didn't do anything other than sit there and look pretty in a cold dark room.

The people that didn't understand gold then don't understand it now. The only difference today is that the horrible price action has brought out the gold bears from the wood work. They are exacting their verbal revenge. The crowd is baying for lower prices.

Of course, it could be that we are so embedded in our own position, so wedded to our own beliefs, and so complacent after twelve years of rising bullion prices, that we're either incapable or unwilling of considering the evidence in front of us. It is possible we're refusing to see the gold bear market because we're emotionally attached to our own position?

Yes, of course it's possible. Every investor believes he is a genius during a bull market. Part of Warren Buffett's credibility is that he began his investing career during a period when a great expansion of the money supply led to an historic rise in corporate profits. Buffett had the good sense to be born at the right time and ride the trend.

It's important to know your limitations as a human being and not to mistake good fortune with personal brilliance. But if you bought gold any time in the last ten years because it's a real asset and people having being using it as a means of exchange and store of value for 5,000 years, not much has changed in the last week except the price of an ounce of gold. As a monetary asset, gold will be around long after the Yen, the Euro, and the Dollar are being used for toilet paper.

Even artists - not famous for their interest in financial matters - seem to know this. One of the exhibits we relished at Hobart's Museum of Old and New Art took some time to sort out. This is as it should be with a good piece of art, whether it's a book, a movie, or something else. The meaning - if there is one - shouldn't come right out and hit you on the head. If it's too obvious it's either a soup label or a traffic signal.

The exhibit in question looked like a long line of leaf patterns on colored paper, at least from a distance. As you got closer - and you'd have to lean in really close to examine the paper each leaf was matted on - you could see that the colored paper was really a collage of old paper currencies. Most of them were from places in South America or South East Asia.

You could have a good philosophical debate over whether anything in life or in the world has actual, objective, meaning. The answer to that question is beyond the scope of today's Daily Reckoning. Our own view, if you must know, is that human beings are meaning-making-machines.

To the extent that we use the same senses to perceive the world (hearing, seeing, touching, and tasting), and share the same fallible human heart with all its emotions, we tend to find similar meanings in works of art. That we extract the same meanings from movies or books or famous paintings could be because we're looking for them to begin with, or because the artist has been adept at conveying what he or she meant.

But again for the purposes of today's essay, why we believe in a given meaning isn't that important. For example, in the case of the leaves painted on paper, we can imagine a political and ecological message. All these forests cut down to make paper money, which is itself now worthless. Something real turned into something unreal, with something valuable lost and nothing worthwhile gained. That is one meaning you might construct.

Another meaning might be that money doesn't just grow on trees. Money IS trees. You turn a real, tangible asset into an idea. The idea is that the note in your hand has value because everyone agrees it does. Everyone also agrees that the note is really just a beautiful tree reduced to a wallet-sized portrait. But you can still exchange your trees for other real assets, like wine, food, or gold.

Trees come and go. They can be cut down, burnt, or logged to extinction. Paper money is ephemeral. It has always come and gone through history, because those who print it cannot resist the temptation to print more. They always do.

Gold is un-tree like. It's difficult to destroy. It doesn't grow on trees. And you can't extract more of it from a printing press. That's why people have always used it as a store of wealth and a medium of exchange. Its physical properties give it a reliability you can never get from paper money issued by a government that's not backed by metal.

Is that an orthodox or unfashionable view? It certainly looks like it, based on the last few days of trading in the gold market. Does gold care? Not a jot. Will today's paper currencies be the museum exhibits of tomorrow? Only if they don't all get burned to produce something useful first, like heat. For now, all the heat is on gold owners.