END_OF_DOCUMENT_TOKEN_TO_BE_REPLACED

...then gold is due for a new, upward run says this long-suffering bull...

The PRICE of gold and of shares in gold miners has taken a beating the last five years, writes Byron King in Addison Wiggin's Daily Reckoning.

You and I have lived through a painful and seemingly endless bear market. For several years, we've had little upside news about gold, silver and precious metal miners.

After a long, downward slide, however, gold prices have finally begun to climb higher. Right now is the perfect time to get back into gold and silver investments. And we have four recommendations to get you in on the ground floor.

My colleague Jim Rickards often speaks about gold moving to $10,000 per ounce or more. Most people just roll their eyes. They assume that it's a made-up number or that he pulled it out of thin air. Actually, $10,000 is the result of some pretty straightforward math.

Here's the five-year price chart for gold to illustrate where we've been. Let's follow these graphic facts: 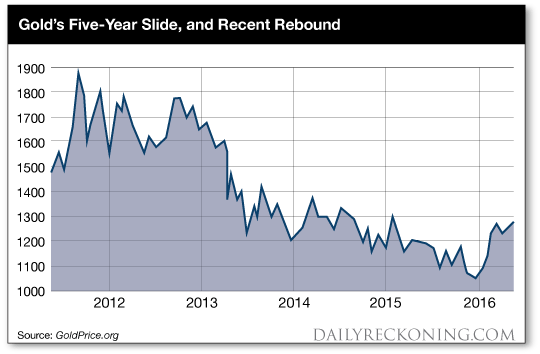 From a high near $1900 per ounce back in 2011, gold prices steadily drifted downward until about December 2015, to under $1100. Then in January of this year, the curve turned around.

Like Jim says, when we're talking about the price of gold, we're really talking about the Dollar price of gold. A lower price in gold simply means the Dollar is strong enough that you can buy the same amount of gold with fewer Dollars. In December 2015, the US raised interest rates, just like they'd said they would. This resulted in a stronger Dollar and suffering US economy.

Realizing their error, the Federal Reserve announced they wouldn't raise rates again in March (a form of ease). The Dollar stopped getting stronger and the downward drift of gold halted.

Then, on 20 January, the Bank of Japan said they were initiating negative rates and triggered gold's latest upward march. Negative interest rates were an attempt to kick-start the economy by incentivizing people to spend their money, since they'd lose money by saving it in banks. I recall seeing that report.

My first thought was: That's nuts. People will stuff mattresses with cash and buy gold.

I was right. In January, gold prices began to climb, taking silver along for the ride. There was a run on safes in Japan so that people could store large amounts of cash and precious metals at home and avoid negative interest rates.

But does the price upswing of the past few months mean that we're in for a new, longer-term era of strength in gold? Will higher gold prices support better returns for mining shares and related investments?

Based on Jim's analysis, the economic elites of the world want inflation, and they're going to get it – one way or another. Rising inflation on a global scale will mean that currencies are worth less, so it will take more of any given currency to buy the same amount of gold.

Plus, everything that made the 2008 market crash so painful is even worse today. Consider the long-running drama of too much private and government debt (the same debt the government is hoping to erase with their manufactured inflation), "too big to fail" banks (just take a look at Nomi's article), derivatives, fake-financial engineering by large companies and dodgy loans for housing, cars and college tuition.

These financial and monetary problems aren't limited to the US, or even advanced economies like Europe and Japan. Entire regions across the world are in dire economic distress and mired in economic uncertainty.

What do people buy in times of economic uncertainty? Gold.

Last fall, the Dollar got stronger and the price of commodities crashed. Earnings at almost all energy companies have fallen through the floor. Major companies like Exxon Mobil, Chevron, Shell and many more have been downgraded by credit rating agencies. Most coal companies are bankrupt. What was once a strong point of the North American economy is now weak.

Now think back to 2011 and high-priced oil from the Middle East, West Africa, Brazil and more. Or solidly priced commodities like iron ore from Brazil and South Africa. Or agricultural commodities like coffee, chocolate and soybeans from places as far afield as Ivory Coast, Vietnam and Argentina. If you were a commodity exporter, your existence was la vie deluxe.

That 2011-era commodity-energy windfall is not the case anymore. Far from it. Indeed, most globally traded commodities are currently in price doldrums. Because of that, many commodity-exporting, emerging-market nations are all but insolvent.

A broad cash flow crisis has hit the whole world due to low prices for emerging market commodities. This is why countries will be onboard with the plan Jim outlined for global inflation. They all desperately need their commodity export prices to go back up to stoke economic growth.

This is the perfect time to get back into precious metal. Gold is due for a new, upward run. And in my opinion, gold miners are going to be the most profitable way to take advantage of the rising price of gold and precious metals. That said, while gold mining stocks follow gold to a great extent, but they're more volatile.