END_OF_DOCUMENT_TOKEN_TO_BE_REPLACED

GOLD is the star of the year so far, grinding higher in what could be the launch phase of a new bull market as confidence wanes in the face of NIRP and other desperate global policy actions, writes Gary Tanashian in his Notes from the Rabbit Hole.

It's also been gaining on the realization that this disgraceful policy – designed to spur speculation and asset price appreciation – is all policy makers have got left in their bags of tricks. The endgame is a bag with a hole in it; a monetary black hole.

Stocks meanwhile grind on in what could be the last significant hope replenishing bounce before new downside is explored. Various US and global indexes are already in bear markets but casino patrons are trained to look at the S&P 500, Nasdaq 100 and Dow as "the stock market" and these have not yet gone 'bear'. If the current bear-trend bounce fails however, that confirmation would be coming promptly.

The comments above are verified by the charts of gold vs. the S&P 500 and the Euro STOXX 50. The bullish move and current consolidation are representative of all major stock markets. This is a trend change in gold vs. stocks (joining gold vs. commodities, which turned up long ago). 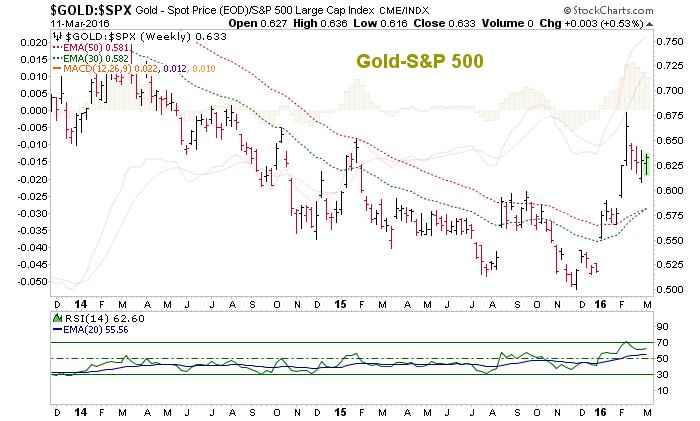 Charts are and are not lots of things, but one thing they are is 100% accurate pictures of history. Very recent history has seen gold break bear market trends as measured in these stock markets. As you can see by weekly RSI and the MACDs faded into the background gold became over bought vs. stock markets. 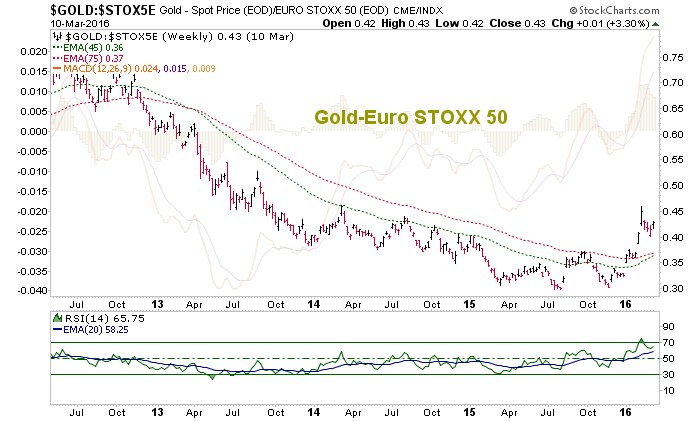 That was impulsive and potentially a bull market signal, but it has also been in need of a cool down, which is thus far taking the form of a bull flag consolidation, which will provide a test of the bull thesis.

Gold vs. Long-term US Treasury bonds is also making a step in a positive direction toward trend change, but is not nearly as advanced.

The above items indicate changing trends in confidence by the investing masses in global central banks that have had a really good run over the last few years, with ironclad confidence in their policies by conventional market participants. Of course, hard core gold bugs would not bow to this unprecedented case of global financial fascism, and for their beliefs they were served years of pain. Now the cycles appear to be changing.

Through gold's bear market I, a believer in more honest monetary systems, had to call it what it was. Beliefs and the biases they inspire had to be subjugated to the simplicity of charts like this one that said "Gold is below the EMA 75? It's in a bear market." 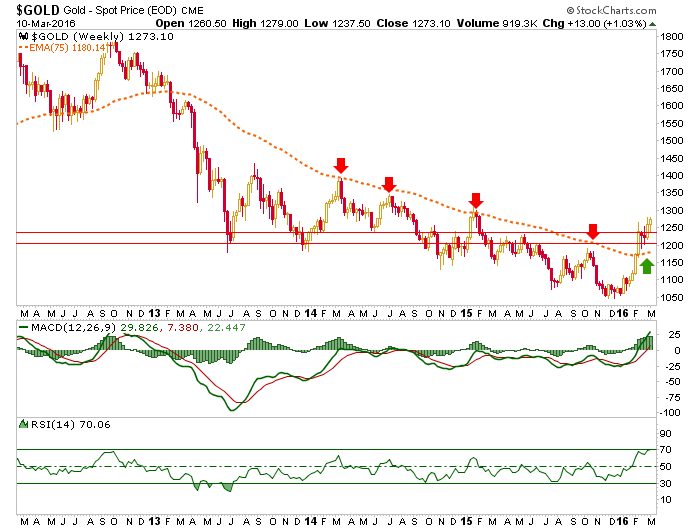 Not having cheered gold in the face of the bear evidence, I feel I have the right to claim now that gold has broken the bear market limiter and made a strong (but not yet definitive) case for the beginning of a bull market.

As for stocks, the S&P 500 has made a weekly moving average signal that produced bear markets in 2 of the last 3 instances.

Yes, the market is bouncing and we anticipated this in NFTRH well before the current crop of now-bullish momentum players came out of hiding.

Here is the view of the troubled, but unbroken US headline indexes. As we have been noting, the SPX and Dow can break above the weekly EMA 50's and still remain in a bear trend (NDX, in maintaining a series of higher highs and higher lows is in a relative bull stance) after bouncing from critical support as expected. 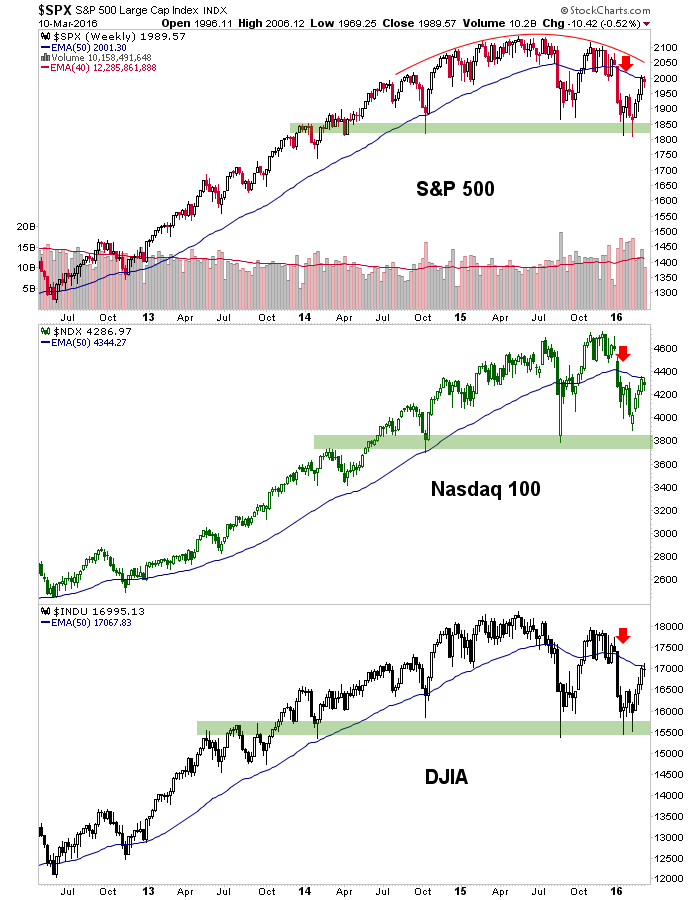 It is in the broader indexes that the US market really flashes bearish. All items are in intermediate bear trends but bouncing back to critical former support, now resistance. If they manage to negate the trends then so be it. We go with what the markets instruct, not our biases or egos. But the fact is that this is a bear bounce only, until otherwise indicated.

The global picture is similar, except that most global stock markets are bouncing from already mature bear trends as opposed to the US market's newer bear trends.

Transitioning back to gold, the yellow metal is an insurance policy and a holder of value, long-term. The miners are the speculation associated with this boring asset and they are decidedly not boring. While we have been expecting a cool down (aka correction), this has not yet come to be so far.

That means the HUI index of gold miner stocks is now in the hands of the momentum players, desperately buying in so as not to miss the train. Sooner or later they will be punished and people should be actively managing a sector that may be birthing a baby bull market per their own orientations (ie, trade, buy the dips, etc.).

Personally, I mostly trade it now and will look to establish longer-term positions later.