END_OF_DOCUMENT_TOKEN_TO_BE_REPLACED

Cheerleaders quieted, at least for now...

OVER in the gold patch things went from disinterested and downright antagonistic to sleepy to ferociously over bullish, writes Gary Tanashian in his Notes from the Rabbit Hole.

Any long-time and right-minded gold bug will tell you that the latter condition is usually a signal to prepare for some turbulence. Last week brought the turbulence in the form of a reversal and pullback for gold, silver and the miners.

Since we became constructive on the gold sector in Q4 2018, the groundswell of gold boosting (pom poms and all) has steadily risen since it became obvious that something bullish was going on in January. And it appears that last week's breakout from various daily chart bull flags in gold, silver and the miners finally jerked 'em all in. Enter the pullback.

In the very few days immediately before that $20 per ounce pullback the gold "community" threw itself a gathering of the bullish clans. On just a quick look around the gold websites some quotes popped out from 2 days before the pullback, and one day before last Wednesday's reversal. It's crickets no more...

"It's been a long time coming so enjoy this day as there will be many more to come. It's just getting started."

"Gold appears to be rallying from the final right shoulder in a multi-shouldered inverse H&S bull continuation pattern. Incredibly, that pattern itself appears to be just the head of a much more gargantuan pattern with a target price of $3000!"

"What is going on is that gold is in the early stages of a parabolic slingshot uptrend as shown, that should soon vault it above the key resistance approaching and around $1400. Once it breaks above this resistance it is expected to accelerate dramatically."

Now, I am not going to affirm or dispute the bullish views above.

The point of this article is only to note that these views are coming out of the woodwork across the "gold analyst" community. And at points of max greed and max enthusiasm, the precious metals get bonked. It's almost ritualistic.

Sentimentrader has been showing gold sentiment as 'over bullish' for some time now and last Thursday we finally got a pullback.

This satisfies gold for a sharp pullback to clean out sentiment to a degree, short-term. If the rally to big picture resistance is still on, it need not drop further. But a very key support area now surrounding $1290 is also noted per this chart from a recent NFTRH update.

We have after all, noted sharp reactions in many markets after the public is subjected to the old "GOLDEN CROSS!!" routine by the media. Gold's golden cross of the SMA 50 above the SMA 200 came in January. 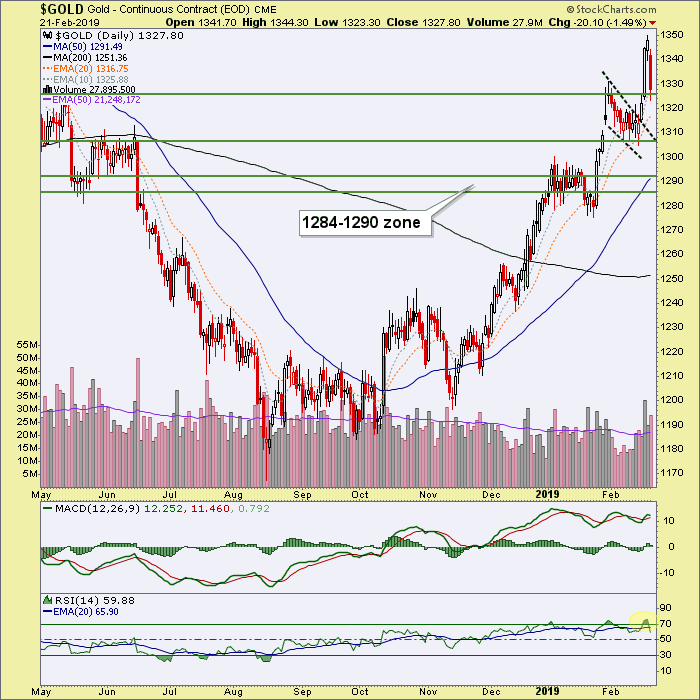 Indeed, gold seems destined to reach the key bear/bull line of demarcation before long for another kick at the bullish can per the monthly chart below.

What does gold have going for it, technically? Well, for one thing the more times a resistance area is tested (this would be in essence, #4) the weaker it tends to become.

What does gold have going against it, from a sentiment standpoint? Everybody...you, me, grandma and grandpa all see that bear/bull line. What's more, so too does a "community" of gold experts who've waited years to be able to bullhorn the news of gold's inevitable $3000 per ounce price. 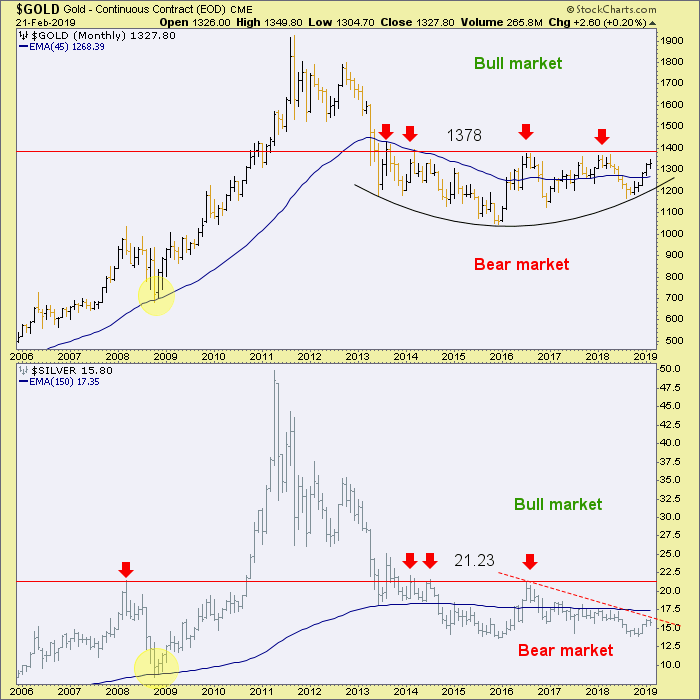 As for the silver chart above, it is really not relevant to this article. It's just part of a chart sometimes used in NFTRH for bigger picture perspective on the metals. However, silver bugs will note that there is a lot of price inflation that needs to take place before they may pronounce a new bull market.

This is not a fundamental article and not much a technical one either. There are lots more signals, time frames and fundamental considerations we are tracking consistently, as we have been since the crickets were the loudest sound in the "community". But a couple of points can be taken from the above...

If gold and gold stocks do continue to grind out a bullish trend and trip our indicators (one of which in particular is on the verge) there will be plenty of time and opportunity to position more seriously for a real bull phase.

But it is not advised to let starry eyed bullish pronouncements stimulate your bullish emotions.