END_OF_DOCUMENT_TOKEN_TO_BE_REPLACED

Bullhorns at the ready...

SO WE evidently highlighted one problem for the gold stock sector a little too obnoxiously for the liking of some bugs, writes Gary Tanashian in his Notes from the Rabbit Hole.

The problem was the aggressive bullhorn sounds emanating from every orifice of the gold community the minute the charts broke upward into an obviously bullish technical state.

But while the ratio of the  HUI Gold Miners stock index to gold prices has been a distinctly positive technical indicator, and while many bullish gold stock charts populated the sector, we noted back in December that gold's hysterically overbought performance vs. broad stocks was due to pull back, hopefully in an orderly consolidation.

Well, the relief has dragged on and the ratio of gold to the S&P500 index and the SPX's global fellows has been consolidating alright. 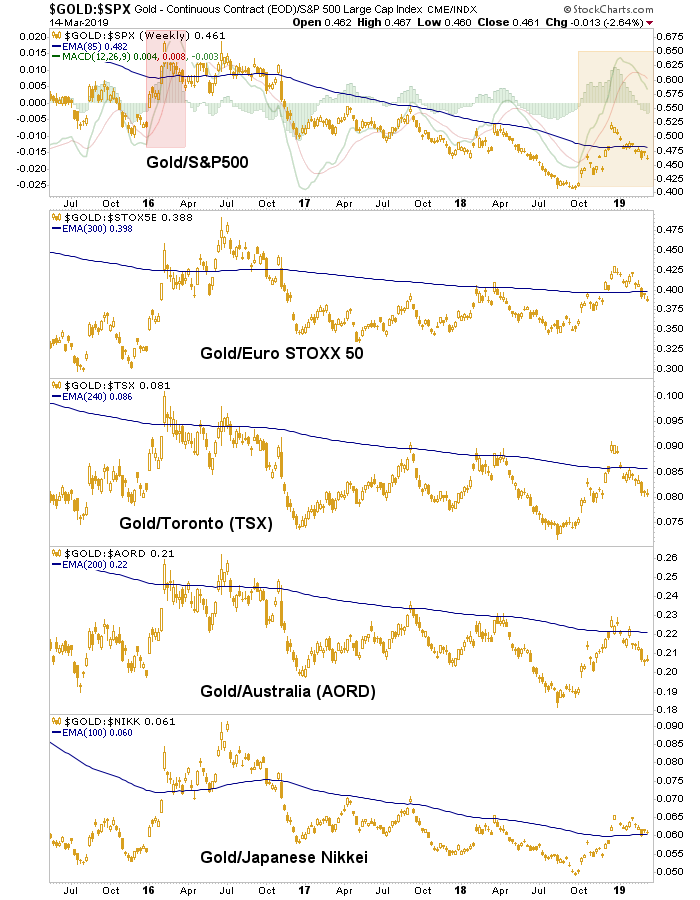 I want gold, silver and especially the miners to launch as much as the next goldbug lunatic, but what I want more than that is to be in line with what is happening.

And since December's blow off in anxiety, what has been happening is relief and risk 'on' markets out-performing gold.

Some will make excuses about evil cabals of financial elites working in concert with globally coordinated Central Banks to quash poor gold and its message that something is not right with the system.

Well, I happen to agree with that second part or else, why be a gold bug in the first place? But it's a miserable way to live while the Good Ship Lollypop (AKA the US stock market, especially) sails on.

It's best to be a smart bug and that means playing by the rules of those much larger creatures walking around above you in shiny and expensive dress shoes. Rule #1 is DO NOT GET SQUASHED! We are in this for the long run, baby.

The signs were there that despite what I and many others saw as positive technicals, something was off. Those signs have over the last several weeks included...

Look, I started becoming constructive on the sector when crickets were the only bugs to be heard.

But the markets change as new information comes in. I'll likely continue to be constructive on the sector but I'll do so realizing that there are some pretty big shoes currently stomping around on the macro floor and that patience and associated risk management are virtues.

We'll just have to stick with simple themes like the pictures within the Macrocosm to guide the process. We got some good signals toward economic contraction and declining confidence in Q4 2018 but then Central Banks performed a coordinated about-face to at least promote a dovish pretense.

Somewhat ironically, that has come with a halt to gold's out performance and despite a raft of bad US and global data the markets do not seem to believe the economic contraction theme at this point. Other aspects of the Macrocosm never did change trend as the trends in the yield curve, gold/stocks and even confidence remain intact.

Be a patient bug and let processes play out over time. I am going to take incoming information and process it weekly. I'd love nothing more than to get bullish again. But we never did get certifiably longer-term bullish because we never did turn the trends and hence, the macro.

It is possible that the mini-bear in equities in Q4 2018 was the gold sector launch amid peak fundamentals. But if so, with subsequently and almost immediately bulling stock markets and no recession (yet), it would not have been comparable in the least to the the bear markets and recessions in the 2001 and 2008 time frames.