END_OF_DOCUMENT_TOKEN_TO_BE_REPLACED

GOLD was well bid during the equity correction but it could not breakout then and has retreated as equities have roared back, writes Jordan Roy-Byrne at TheDailyGold.

As a result, the gold-to-stocks ratio has retraced most of its recent surge. Meanwhile, the US Dollar has rebounded and the oversold and overhated bond market could be starting a rally.

As we noted in One Big, Potential Catalyst for gold in 2018, gold is no longer trading with bonds and therefore could benefit from a big breakdown in bonds. As the chart below shows, the bond market has experienced a major breakdown. In recent days, the 5-year, 10-year and 30-year bonds all touched multi-year lows. 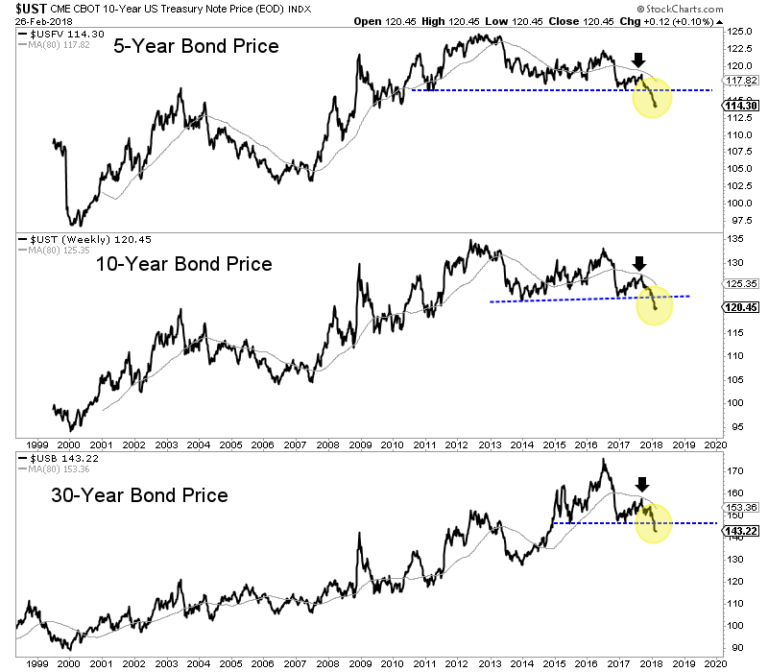 The breakdown in the bond market has helped gold rally but why hasn't gold reached the corresponding multi-year highs?

First, we should remember that the correlation between gold and bonds was positive until November 2017. The market has begun to sense inflation only recently.

Second, while bond prices have broken down to multi-year lows, bond yields (and specifically long-term yields) have yet to breakout to multi-year highs.

The chart below shows long-term yields are testing multi-year resistance. For the 10-year yield, a strong push above 3.00% would mark more than a 6-year and almost 7-year high. A break above 3.25% in the 30-year yield would mark a 4-year high. 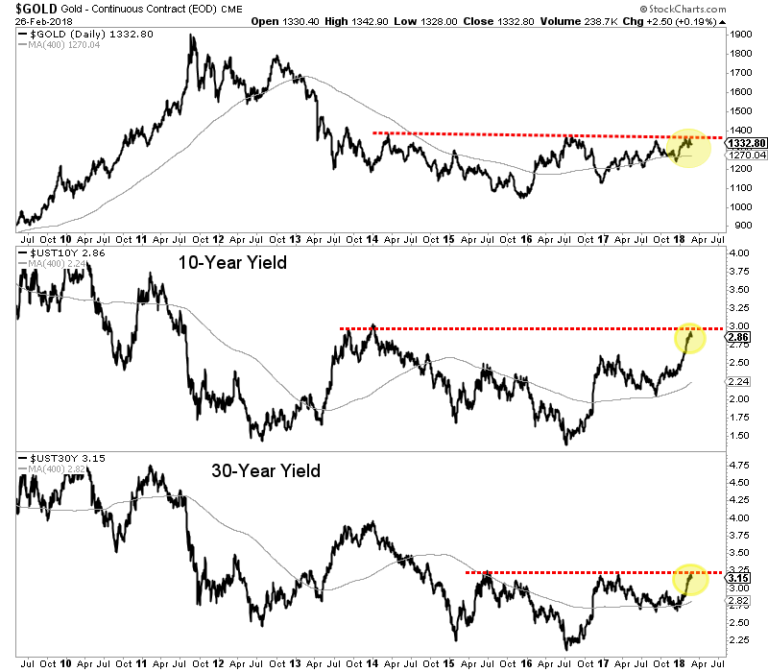 We have argued that gold was unlikely to breakout immediately due to its lack of relative strength as well as the lack of strength from silver and the gold shares.

If that remains the case then we would also expect bond yields to correct and digest their recent advance rather than breakout. We should also note that the daily sentiment index for bonds hit an 18-day average of 15% bulls. That is a bearish extreme and suggests the probability that bonds will rebound and yields will decline.

Gold could be waiting for a major breakout in bond yields, which would be a reflection of increasing inflation and inflation expectations. It would also result in more pressure on the economy and therefore the stock market. That would benefit gold in both nominal and real terms.

We expect a counter-trend move in gold and bond yields before a breakout. This will allow us a bit more time to position in the juniors that should deliver fantastic returns.