END_OF_DOCUMENT_TOKEN_TO_BE_REPLACED

AS I SEE IT decentralized assets have never looked more attractive than they do now, says Frank Holmes at US Global Investors.

That includes gold, silver and Bitcoin, and you could also make the case for collectibles like art.

By "decentralized" I mean that these assets are not issued by a central authority. They are no one's liability. No central banker makes the decision to mint more gold or silver. No finance minister decrees that Bitcoin production be slowed or accelerated.

Investors have been diversifying with gold and silver for decades to limit their exposure to poorly executed monetary and fiscal policies. As I shared with you last month, investors bought more American Eagle and American Buffalo gold coins between January and September of this year than in any other such period going back to 1999.

I believe this is largely a reflection of Americans' souring opinion of the state of the economy and the imbalance they see in monetary and fiscal policies. 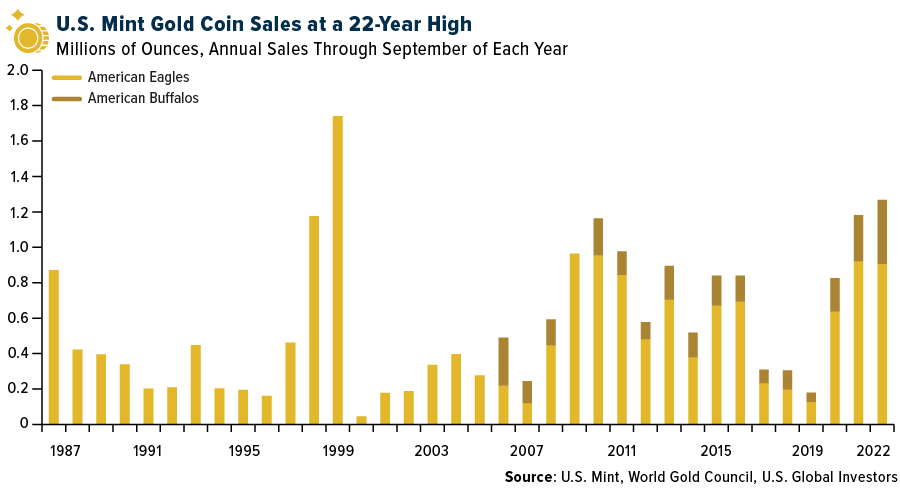 For the same reasons, more and more investors are also diversifying with Bitcoin, an asset whose payment system is based on "cryptographic proof instead of trust." That's from Satoshi Nakamoto's Bitcoin whitepaper, released 14 years ago.

Satoshi's point about trust is key to the idea of decentralization. As users of government-issued fiat currency, we have little choice but to trust policymakers' economic and financial decisions, which may significantly impact the value of our money.

Take a look at where monetary and fiscal mismanagement has gotten us. Total US debt now stands at an unfathomable $31 trillion, or around a quarter of a million Dollars per US taxpayer. Debt accounts for over 121% of the entire US economy. That means that for every Dollar the US has, it owes a buck and a quarter (almost).

Meanwhile, the Federal Reserve has been lifting interest rates at a pace we haven't seen in 40 years, which makes servicing debt much more expensive. The amount of money the US government pays on interest alone now exceeds its defense spending.

In the third quarter of 2022, the government paid over $736 billion just on interest. That's more than its 2020 national defense budget of $714 billion.

With gold, silver and Bitcoin, there's no need for investors to put their trust in a third party or intermediary, especially one that may not have their best interests in mind.

What I find interesting is that central banks themselves – the ultimate central authorities – recognize the power in diversifying with decentralized assets. According to the World Gold Council (WGC), global central banks collectively added a record amount of gold during the third quarter. Purchases jumped to nearly 400 metric tonnes, more than double the amount compared to the previous quarter and a new quarterly record.

With these purchases, the year-to-date total for 2022 now stands at 673 tonnes, higher than any other year since 1967, the WGC says.

Gold's critics and haters will point out that the price of the precious metal has been down for seven straight months, a new all-time record, as of October.

They are correct. Due to rising interest rates and an historically strong US Dollar, gold has experienced a monthly losing streak unmatched since – are you ready for this? – 1869.

What about other asset classes? Well, tech stocks (Nasdaq 100) have lost even more at around -30%. Emerging markets have done just as badly in 2022.

So yes, the price of gold has declined for a record seven months, but it's still beating close to everything else. That has to count for something.

For these reasons, I believe gold is priced very attractively under $1700 an ounce. The Fed will need to pivot at some point, and when it does, I think gold (and Bitcoin) could rally.