END_OF_DOCUMENT_TOKEN_TO_BE_REPLACED

Tight margins shrink to 5c per oz, no ASM boom...
GOLD BAR standards in the wholesale bullion industry are set and monitored by trade body the London Bullion Market Association (LBMA), writes Adrian Ash at BullionVault, following on from this update on India's gold bar refining outlook.
Now managing the Good Delivery list of refineries making bullion acceptable to the London market – first developed and run by the Bank of England – the LBMA requires that each bar is a certain purity, weight and shape. Each bar must also carry certain key markings, so it can be tracked and traced from first delivery into specialist vaults until it's removed by an owner wanting to use the bar for making other gold products.
Since 2012 however, and working with the Organization for Economic Co-Operation & Development (OECD), the LBMA has added non-physical rules to its Good Delivery standards, demanding that accredited refiners run ever-tighter due diligence on their suppliers, applying strict anti-money laundering checks.
At the same time, leading industrial buyers demanded ever-tighter rules too, thanks in part to the US Dodd-Frank Act forcing listed corporations to check and state that they had no "conflict minerals" in their supply chain, meaning metal mined and sold to help finance war or terrorism.
While Donald Trump has moved to repeal Dodd-Frank, including Section 1502 on conflict minerals (specficially 3TG), the law remains in place – and anyway, its impact on corporate-social responsibility looks permanent.
"Our supply chain is global. So is our responsibility," says giant gadget-maker Apple, claiming it conducted "a total of 1049 supplier assessments...in 45 countries" in 2018.
Such due diligence doesn't come cheap, but against a monster like Apple, the bulk of all those consultancy and auditor fees will land of course with the supplier. For gold's wholesale market, that puts the costs onto the 'pinch point' where doré and scrap are refined into those high-purity Good Delivery bars, ready to make the chips and bonding wire in your smartphone as well as the wedding ring on your finger and the investment-grade gold bars in your retirement account.
"With such responsibilities (and associated penalties)...I have long felt that we as an industry group are not finding a collective and strong voice," Reuters quotes a letter from Swiss refiner Valcambi's CEO Michael Mesaric, apparently sent last year to both the LBMA executive team in London and his LBMA-accredited competitors worldwide.
As it is, three of the LBMA's 10-person Board happen to be senior executives at refining companies, including former LBMA chairman (and current vice chair) Grant Angwin of Asahi Refining and Mehdi Barkhordar of private Swiss group MKS Pamp. But now the LBMA is forming a new committee "open to all Good Delivery refiners [as] an opportunity to discuss...challenges...and areas of mutual interest," Reuters says, quoting the Association.
One clear challenge looks to be growth, another might be profitability. But discussing those at a committee level could prove tough given the fierce competition between the biggest Good Delivery  refiners. 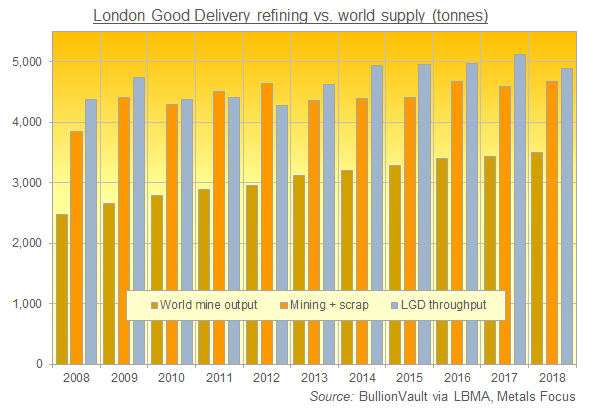 As you can see, reported production of London Good Delivery gold bars is typically greater than the visible level of total global gold supply each year.
That makes sense, because on top of processing new doré from miners and smelters, plus mining concentrate and old gold jewelry, the 68 refineries currently approved to cast and supply these 400-ounce gold bullion bars to the wholesale market will also recycle smaller investment items (not captured in the 'scrap' figures above), as well as upgrading old low-purity gold bars, processing their own previous sweepings, and refining by-product from other mining and refining work too.
As you can also see, London Good Delivery refining has grown in recent years. But it failed to keep pace with the growth in global mining flows. This suggests that, in seeking to keep illegal, conflict and human-rights-abuse gold out of the global wholesale market, the LBMA's Good Delivery standards are proving successful. Because the growth in mine output from informal and illegal projects across emerging economies in Latin America, south-east Asia and parts of Africa doesn't seem to show in the volume of LGD manufacture.
Our chart above isn't quite apples to apples, because the LBMA shares annual data on London Good Delivery throughput at its autumn conference each year, rather than publishing calendar-year figures. But expanding since 2013 by 1.2% per year on those data, the volume of LGD gold bars refining has lagged both the 1.4% compound annual growth rate in total supply and the surging 2.4% rate of growth in mine output on Metals Focus' series – now revised dramatically higher to account for the leap in artisanal and small-scale gold mining (ASM).
Put another way, world mine output rose by 1,000 tonnes per year in the decade ending 2018, but annual LGD throughput grew by only half that quantity.
Switzerland remains the leading nation for bullion refining, and here again there's evidence of material going elsewhere as the big London Good Delivery gold bar refiners apply ever tighter due-diligence to incoming metal. The country's total gold imports last year slipped 6.1% by weight from 2017, but imports from developing countries fell 12.0% on the country's official 2018 trade statistics, dropping to the smallest since 2015.
Swiss-based, Indian-owned Valcambi has meantime just lost its 4-million-ounce-a-year contract to refine gold for No.2 mining company Newmont (NYSE: NEM), Reuters also says, quoting un-named sources and claiming another exclusive.
Newmont until 2015 owned 60% of Valcambi's then-parent group, before selling for around $400m to the Singapore subsidiary of India's Rajesh Exports Limited (BOM: 531500), a major jewelry dealer in the world's No.2 gold consumer. Now 3 other gold-bar manufacturers will split the flows from Newmont which Valcambi still enjoyed Reuters claims, naming Swiss competitors Argor-Heraeus and Pamp as well as Japanese-owned Asahi (TYO: 5857) – buyer in 2014 of Johnson Matthey's North American refining capacity, and also 2019 winner over Valcambi to buy bankrupt US business Republic, paying $25.5m in February.
Most spectacular, Reuters' sources claim that "toll" refining charges for turning Newmont's ore into large wholesale-market bars will run from perhaps 30 cents per ounce down as low as 5 cents per ounce. That's after charges have already been squeezed 80% lower since the millennium according to the very vocal panel of senior Asahi, MKS Pamp, Perth Mint and Valcambi executives at the 2018 LBMA conference in Boston.
While competition to source material is clearly tightening, it shouldn't in fact be related to how a good chunk of new London Good Delivery capacity approved in recent years has been added in No.1 gold miner, consumer and importer nation China. That's because, just like zero gold miner but No.2 consumer India, China bans the export of gold bullion, making its LGD production a closed circuit. But while  India's refining capacity has surged so far this decade it still has only one London Good Delivery-accredited refinery, the MMTC-Pamp joint-venture between the government and Swiss bullion refining and finance group MKS Pamp. And now, rather than matching or trying to achieve London Good Delivery status for other refineries, India's gold industry is looking to develop its own set of 'Good Delivery' standards.
The nation has committed itself to OECD responsible sourcing, note Sudheesh Nambiath and Professor Arvind Sahay of the India Gold Policy Centre, writing in the Economic Times, and it's also part of the inter-governmental Financial Action Task Force (FATF), aiming to combat money laundering, terrorist financing and bribery. That's clearly a good thing for a giant democracy which feels the need to ban anyone from carrying large sums of cash during election time.
"[But] if the government doesn't pay attention," says an un-named Indian refining executive quoted by news-agency Cogencis, inflows of illegal gold – apparently turned away from the world's existing Good Delivery refineries on our chart above – " could tarnish the country's image [with] irresponsible sourcing...[and the industry] may have to pay the price in the long term."
In short, it's not getting any easier or more rewarding to produce large bars for the global wholesale gold market. But longer-term, it's not looking too smart legally or commercially to try refining gold bars outside those kind of standards for supply-chain due diligence either.