END_OF_DOCUMENT_TOKEN_TO_BE_REPLACED

Gold mining + scrap supply tighter on ESG, competition...
WHOLESALE GOLD BAR refining margins have sunk 80% over the last two decades, attendees of the 2018 London Bullion Market Association conference in Boston, Massachussetts heard last week.
Driven by over-capacity and a decline in the quantity of metal available to refine, the margin charged for toll refining – where the supplier of ore or concentrate remains its owner throughout the process, rather than selling it to the refiner – has fallen from $1 per ounce 15-20 years ago to just 20 cents today, said Richard Hayes, CEO of the Perth Mint in Australia, at the Refiners' Panel on Day 2 of Boston 2018.
There was excess capacity in precious metals refining even before the global financial crisis, said Marwan Shakarchi, chairman of Swiss refiners MKS – owners of the Pamp gold bar brand – and that only grew worse in 2008-2013 as the industry expanded on the flood of scrap jewelry coming from Western households thanks to surging prices, financial stress, and the cash-for-gold phenomenon.
Together this created a "glut of second-tier material with nowhere to go" agreed Grant Angwin, president of global refining group Asahi – which bought Johnson Matthey's US gold and silver refining operations in 2014 – pointing to the 2008-2013 collapse in jewelry demand.
"So there was a rush to get Good Delivery accreditation," he explained, because LBMA approval enables a refiner to deliver gold bars into London's vaults, storage hub of the world's wholesale market.
Availability of metal for refining has since declined, Angwin went on, both because of a drop in scrap recycling and primary flows – thanks to lower prices and "miners chasing profit, not ounces" – and because of greater due diligence requirements for accredited refiners on where and how they source metal.
Environmental, social and governance checks (ESG) are set to feature ever-more heavily on the LBMA's Good Delivery criteria, further expanding its centuries-old remit of gold bar quality, weight, shape and markings for what is acceptable to the Bank of England and other key London vault operators.
This new stress on due diligence has created a "two tier" market agreed the LBMA panel between high-quality bars from recognized refineries versus more unregulated output, often using artisanal or illegal mining and scrap supplies.
The refining panel also suggested there's a 2-tier market within the wholesale industry trading London Good Delivery bars, citing concerns over supply-chain due diligence and the financial strength of un-named competitors. Some LGD gold bars won't be accepted by London vaults, or will be taken only "with great reluctance".
Out of 3,200 tonnes of gold mined globally last year, only 1,500 to 1,800 tonnes is available to the leading Western refiners said MKS' Shakarchi, thanks to protectionist policies such as No.1 miner China's ban on exports of raw gold and Ontario's rule that first processing of any domestic mineral must happen inside that Canadian state.
"You could each process that individually," suggested Neil Harby of the London Bullion Market Association, chairing the panel of four senior refining executives at last week's event.
With no domestic gold-mine output, No.2 gold consumer nation India saw its refining industry near collapse in 2013 as over-capacity – encouraged by government investment and tax breaks – met a sharp drop in supplies.
Still with only one LGD-accredited gold refinery today – his own MMTC-Pamp – and still with an import-duty advantage for unrefined metal, Rajesh Khosla noted in a separate session at LBMA 2018 that India is now seeing increasing inflows of doré (an alloy usually of gold and silver produced at the minehead) as opposed to refined bullion bars, giving a boost to the country's domestic industry.
Importing 135 tonnes of doré so far in the 2018-19 tax year, India has already matched the full-year 2016-17 inflow of gold for refining into bullion domestically in just 6 months, Khola noted. 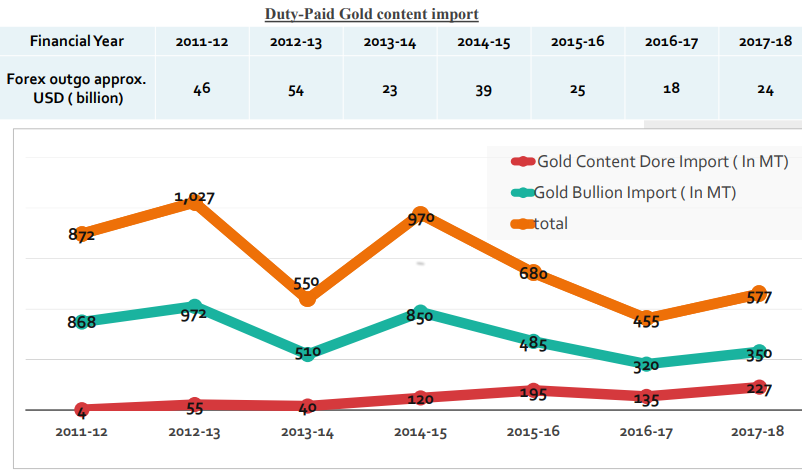 Data shares by the LBMA's Harby at the Boston conference said global gold through-put by London Good Delivery-rated refiners has this year fallen to its lowest since at least 2013, dropping 4.5% from 2017 to 4,893 tonnes.
"Surely normal competition should weed out less profitable refineries?" he asked the panel.
But the panelists – including senior executives from Valcambi, Swiss giant MKS Pamp, Australia's Perth Mint, and the 2014 buyer of Johnson Matthey's US gold-and-silver refineries Asahi – said that wasn't necessarily the case, noting the very low bars to entry ("you can buy a precious-metals refinery off the shelf in Italy") and comparing gold refining to the car industry and other sectors with national champions.
The answer for refiners, said Swiss brand Valcambi's CEO Michael Mesaric, is to push further along the value chain, launching higher-margin products for the retail investment market and also taking more risk in other, related businesses. That requires a stronger capital base however.
Miami-based Republic Metals Corp. was due Tuesday to move for Chapter 11 administration in a New York bankruptcy court after "negotiations with a potential buyer... were unable to come to an agreement."
Not named in the court documents, Swiss refining giant – and fellow London Good Delivery gold bar producer – Valcambi said during the LBMA Boston conference early last week it had " reached  an understanding to acquire [Republic]...subject to completion of the final steps of due diligence."
With its creditors issuing default notices back in June, court documents filed last Friday suggest RMC has a shortfall of $100m between its assets and liabilities.
"In April 2018," court documents say, "[Republic] discovered a significant discrepancy in its inventory accounting as part of its preparation of 2017 year-end financials" – a discrepancy then confirmed by independent physical inspection.
"It is the debtors' intent to attempt to sell the company as a going concern," says the restructuring officer managing Republic's filing, "but if unsuccessful, the debtors will engage in a process to liquidate their assets and inventory for the ratable benefit of their creditors."