END_OF_DOCUMENT_TOKEN_TO_BE_REPLACED

Why backwardation in gold does not imply arbitrage...
IN THE PAST, writes Dr.Tom Fischer, professor of Financial Mathematics at the University of Wuerzburg, Germany, several gold market commentators have argued that backwardation in gold forwards or, equivalently, negative GOFO rates, should theoretically be impossible as this constituted an arbitrage opportunity.
With the London bullion market recently having experienced slight backwardation in some maturities, this claim has resurfaced again. In this article, it is explained why the statement is a fallacy that can be attributed to a misunderstanding of basic arbitrage concepts, which will be reviewed in due course.
The argument of the arbitrage proponents goes as follows: Assume that someone owns gold today and that there is backwardation in the gold market, present in the sense that the spot price of gold today is higher than the forward price in, say, one year's time. Then, this person can sell gold today and simultaneously enter a forward contract, earn interest over one year, and buy back the gold at the end of that year at a cheaper price. The result is the same amount of gold, plus a cash profit consisting of the earned interest and the price differential between the sale and the purchase price.
As this profit was risk-free, so the argument goes, this constituted an arbitrage, something which should not exist as it should be "arbitraged away". In the following, it will be shown that this supposed arbitrage is none, and hence, jumping to any conclusions about alleged market dysfunctionalities, manipulations, or failures based on the observation of backwardation could be erroneous and misleading gold investors who read such commentaries.
Backwardation in gold
The London Bullion Market Association (LBMA) states in their "Guide to the London Precious Metals Markets" the following about backwardation:

"Traditionally gold interest rates are lower than Dollar interest rates. This gives a positive figure for the forward rate, meaning that forward rates are at a premium to spot. This condition is often referred to as contango. On very rare occasions when there is a shortage of metal liquidity for leasing, the cost of borrowing metal may exceed the cost of borrowing Dollars. In this scenario, the forward differential becomes a negative figure, producing a forward price lower than, or at a discount to, the spot price. This condition is known as backwardation."

"BACKWARDATION A market situation where prices for future delivery are lower than the spot price, caused by shortage or tightness of supply."

So, not only does the LBMA guide offer a definition, but it also offers an explanation for backwardation. However, there is no mentioning of this constituting an arbitrage opportunity.
An example:
Let us assume that someone owns 1,000 ounces (oz) of gold today at a spot price of $1500/oz, a total wealth of $1500,000. Further, assume that gold is in backwardation in the sense that the 1-year forward price is $1470/oz. This means that the 1-year Gold Forward Offer Rate (GOFO) is at negative 2%, since the difference between the forward and the spot price, of minus $30, equals negative 2% of $1500. For the sake of this example, we generally ignore counterparty risk and any bid-offer spreads. We assume that 1-year LIBOR, as the risk-free rate of interest, is at 1%. Selling now gold at spot, one receives $1,500,000 and can enter the 1-year forward contract for 1,000 oz.
For the sake of the example, we ignore any margin or trading costs that might occur. One invests the $1,500,000 at 1-year LIBOR.
Fast-forward one year. One receives $1,515,000 from the money market investment. The gold forward has to be honoured and $1,470,000 have to be paid to receive 1,000 oz of gold. Result: One owns $45,000 and 1,000 oz of gold. Therefore, so the argument goes, this was arbitrage. 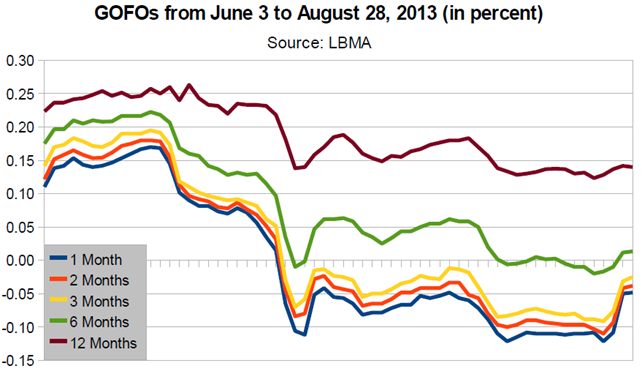 Dr. Tom Fischer is professor of Financial Mathematics at the University of Wuerzburg, Germany. His research interests lie in the areas of asset and derivative pricing, systemic risk, risk capital allocation and FX risk management. As a gold and silver investor, Professor Fischer closely follows the precious metals markets and has developed a proprietary stochastic gold price model. He is a member of the German Association for Actuarial and Financial Mathematics (DGVFM) and the German Risk Management Association (RMA e.V.). Professor Fischer can be contacted here.