END_OF_DOCUMENT_TOKEN_TO_BE_REPLACED

Ready for new record high...?
A PERFECT STORM of surging government debt levels, plunging real bond yields, rising coronavirus cases and deteriorating economic forecasts pushed the price of gold to an eight-year high last week, and some analysts now project the metal to top its all-time high within the next 12 months, writes Frank Holmes at US Global Investors.
Gold touched $1778 an ounce last month, its highest level since February 2012 and coming within striking distance of the psychologically important $1800 resistance level.
What drove the yellow metal's price action was not just an alarming rise in confirmed virus infections – US cases hit a new single-day record of more than 42,255 – but also a weakening US Dollar. The greenback declined the most in three weeks as the Yen and Euro strengthened amid gains in global shares. 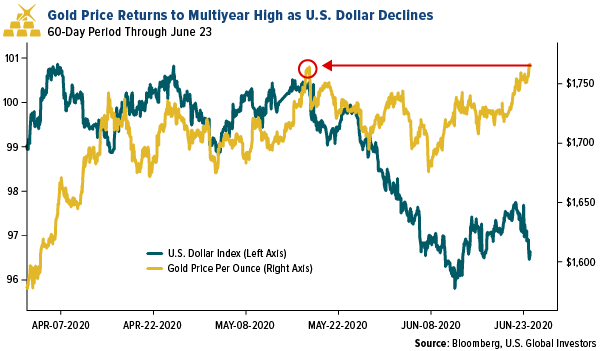 Looking more long term, gold continues to find support from negative yields, both real and nominal. The amount of negative-yielding government bonds around the world rose back above $13 trillion last week for the first time since March. The high of $18 trillion was set in August of last year.
The real 10-year Treasury yield traded as low as negative 0.66% last Tuesday, a level we haven't seen since May 2013. As I've shown a number of times before, gold trades inversely to bond yields, and when they turn negative, it's like rocket fuel for the yellow metal. 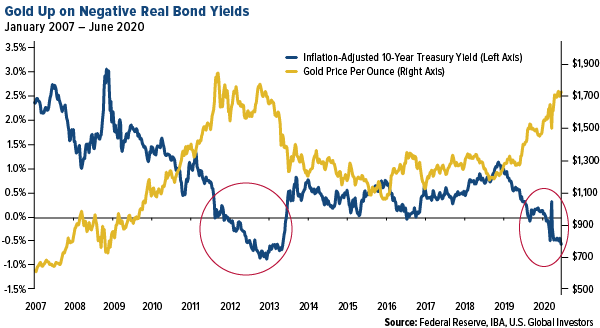 Meanwhile, the International Monetary Fund (IMF) lowered its economic growth forecast for 2020. The world economy is now projected to plunge nearly 5% this year, a downward adjustment of 1.9 percentage points from the IMF's April forecast.
"The Covid-19 pandemic has had a more negative impact on activity in the first half of 2020 than anticipated, and the recovery is projected to be more gradual than previously forecast," IMF economists wrote in the June 24 report.
This could spur even more monetary and fiscal stimulus from world central banks and governments, which is already unprecedented. The Bank of England (BoE) recently added to its bond-buying program, and the Federal Reserve has signaled that it will be keeping rates near zero.
Get this: As of right now, the Fed's balance sheet stands at $7 trillion, or 33% of US GDP. And earlier this month, the Treasury's public debt soared past $26 trillion, an incredible 120% of the entire US economy.
This isn't sustainable, obviously, and some analysts now see Dollar-denominated gold hitting a new all-time high in the next 12 months, even in a risk-on environment. Both Morgan Stanley and Citigroup maintain their call for $2000 gold by mid-2021.
London-based research firm Edison goes even further. In a note dated June 23, analysts there commented that gold should be near $1900, "with the potential for this to rise to in excess of $3000."
So far in 2020, physical gold is comfortably the best performing major asset. It's outperformed not just the S&P500 but also the US Dollar, emerging markets, Treasuries and high-yield corporate bonds.
In fact, this is gold's best year ever so far in Dollar terMs.The chart below shows you all the highest highs (the red line) and lowest lows (teal line) between January and December from the past 10 years. The yellow line is gold's price action in 2020, and as you can see, it's trading higher at this point than it ever has in the month of June.
Historically, June has been a relatively weak month for gold, making it a good time to consider adding the metal to your portfolio in anticipation of seasonal asset appreciation. India, the world's second largest purchaser of gold after China, has two big events coming up that in years past have pushed the metal's price higher thanks to increased demand. I'm talking, of course, about Diwali and the Indian wedding season, both of which I've written and spoken about numerous times.
The question this year, though, is how much of an impact the pandemic will have on these huge cultural celebrations, and if gold will see a difference.
Like the US, India just had its biggest one-day spike in new coronavirus cases, with approximately 20,000 reported last Monday. The Asian country is the fourth worst affected country after the US, Brazil and Russia, and its death toll is the eighth worst.
Again, gold demand in anticipation of the upcoming Diwali celebration and Indian wedding season has helped prices move higher heading into August and September. Were this a "normal," non-pandemic year, the added demand may have been such that gold could top $1800 an ounce or more.
There are already reports of some Indian couples delaying or outright cancelling their 2020 wedding plans, not just as a precautionary measure but also to wait it out and tie the knot under more ideal conditions. Indian weddings have traditionally been grand affairs attended by large numbers of family members, a clear health risk in the age of Covid-19.
For couples who are choosing to move forward with wedding plans, there's a new "essential": matching face masks.
As a result of the cancellations, gold consumption in India could potentially fall as much as 50% in 2020 compared to last year, from 690.4 tonnes in 2019 to between 350 and 400 tonnes this year, according to one forecast.
Although this may end up being the case, it's worth remembering that gold still plays a massive role in many other corners of Indian culture. Indians still save in gold, with as much as 75% of Indian savings invested in the precious metal, according to Incrementum. Private households in the country are estimated to be the single largest gold hoarders in the world, with some 24,000 metric tons. That's more than three times the amount the US has in its official.
There could also be some good news thanks to a healthy monsoon season, which begins this month and continues through September. It's been estimated that a third of Indian gold demand comes from rural farmers, whose crop revenue depends on the rains delivered by a good monsoon.
This year the monsoon is forecast to be normal, and already Indian sugar producers are having an excellent season, with exports at a record volume for the second year in a row. I believe this is constructive for gold demand.