END_OF_DOCUMENT_TOKEN_TO_BE_REPLACED

The biggest political event of 2016, bigger maybe than Trump...

IF YOU are a serious investor – and because you're reading this, I have to assume that you are – gold is looking more and more like a crucial trade, writes Frank Holmes at US Global Investors.

Less than a week remains before United Kingdom voters decide on whether the country will continue to be a member of the European Union (EU) or become the first-ever to leave it. The "Brexit" as it's come to be known is arguably the most consequential political event of 2016 – perhaps even more so than the US presidential election in November – with far-reaching implications.

Should the UK leave, it will certainly underline the question many people have about the EU's viability. And remember, this is a group of countries that collectively has the world's second largest gross national product (GDP), followed by China.

But whatever happens, "the European Union is not going to remain the same," as Aram put it during the webcast. "The Euro is still very unstable, and I think we could easily see an environment in which trade barriers will increase and currency wars will increase. Regrettably, we could have a weaker global economy."

With this as the threat, "gold's role is one of wealth protection," Aram said.

Even Europeans are beginning to lose confidence in the European experiment. The Pew Research Center recently polled nearly 10,500 Europeans from 10 separate EU countries on their favorability of the 28-member bloc. Nearly half of all respondents – 47% – held an unfavorable view. 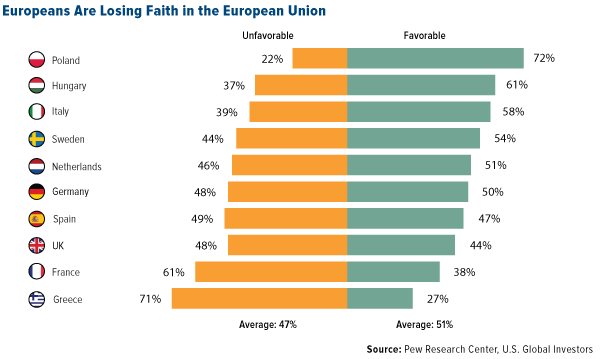 Trust in the European Central Bank (ECB) continues to falter as well. In a blistering note titled "The ECB must change course," Deutsche Bank called out the central bank for "threatening the European project as a whole for the sake of short-term financial stability."

The ECB's actions have "allowed politicians to sit on their hands with regard to growth-enhancing reforms." The longer the bank persists with a negative interest rate policy, the more damage it will inflict upon Europe, Deutsche added.

Meanwhile, Frankfurt-based Commerzbank is considering stashing physical cash in pricey vaults instead of keeping it with the ECB, whose policies are cutting into bank profitability.

Speaking to the World Gold Council's Gold Investor newsletter this month, former Governor of the Bank of England Mervyn King criticized the ECB's negative rate policy, saying: "If you repeatedly bring down interest rates to try and persuade people to spend today rather than tomorrow, it works for a while. But they become increasingly resistant to being asked to spend their resources now rather than save for the future."

Like Aram and others, King sees gold as a likely solution. "There is clearly a need to take some precautions against an unknowable future," he said, which is the same argument for having health insurance.

Negative rate policies are having a huge effect on bond yields, as you can see below. Over $10 trillion worth of government debt across the globe carried a negative yield as of the end of April. (In a tweet last week, legendary bond guru Bill Gross called it "a supernova that will explode one day.") In Switzerland, three quarters of all government bonds right now actually charge investors interest. Real harm is being done to retirees, who have had to pick up part-time work at Walmart or become Uber drivers to offset lost interest on their savings and pensions. 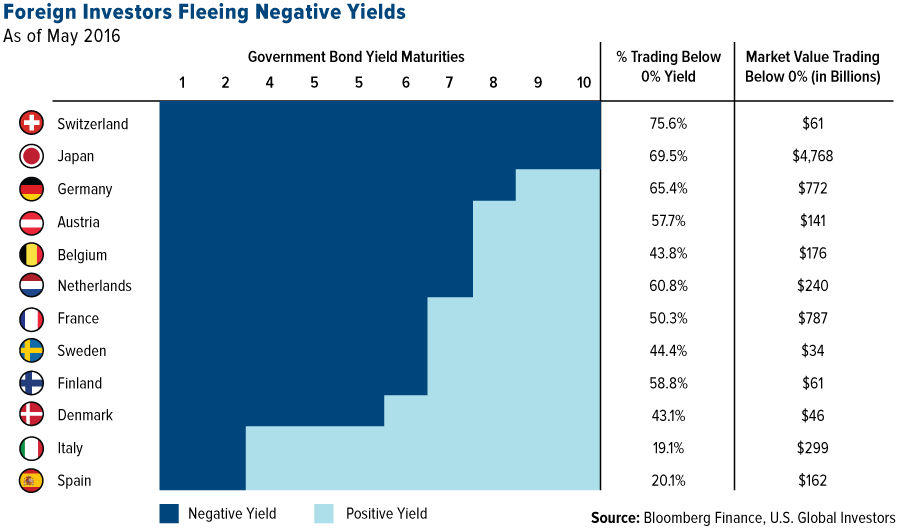 This is prompting investors to look elsewhere, including the US municipal bond market, which has attracted $632 billion in assets this year alone as of June 1. Of that amount, more than $22 billion has flowed into muni mutual funds, the best start to a year since 2009. Between that year and the end of 2015, the amount of US municipal debt held by foreign investors climbed 44%, validating its appeal as an investment with a history of little to no drama, even during times of economic turmoil and periods of rising and lowering interest rates.

Joining Aram in seeing the Brexit as further proof of impeding economic troubles is billionaire investor George Soros. After a hiatus of conducting any personal trading, the 85-year-old is back in the game – this time with some bearish investments. In the first quarter, he purchased a $264 million stake in Barrick Gold, the world's largest gold producer, and a million shares in precious metals streaming company Silver Wheaton. It appears he's added to both positions, indicating a bet against the broader equity market.

Now, with a Federal Reserve rate hike looking more and more unlikely this month, gold is expected to resume its bull run, according to Australia and New Zealand Bank Group (ANZ) commodity strategist Daniel Hynes. This, along with a possible Brexit, could push the yellow metal to $1400, a price we haven't seen in three years this month.

Paradigm Capital also sees the rally picking up where it left off in May, noting that gold's trajectory so far this year resembles the one it took in 2002, the first full year of the last bull market, which carried the metal to $1900 in 2011. "The resemblance is rather striking," Paradigm writes. 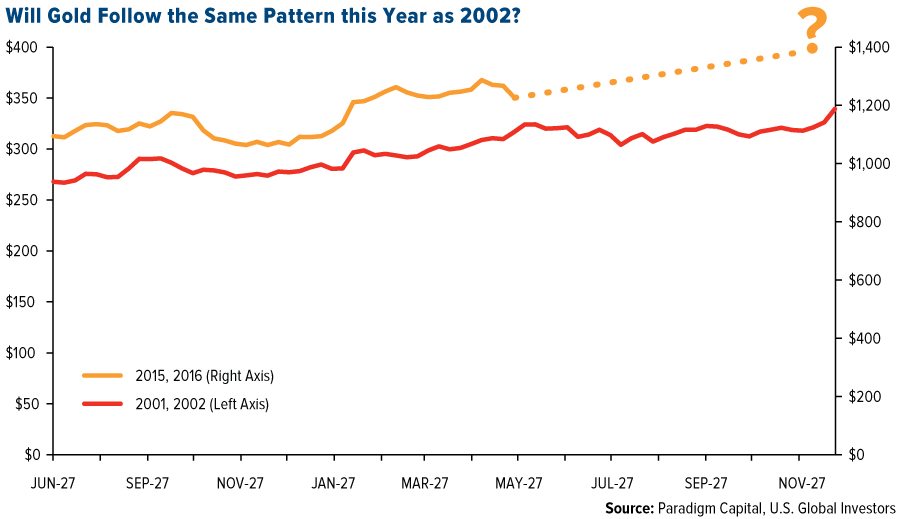 The investment dealer forecasts gold to reach nearly $1400 by year-end after a dip in October. It also maintains its position that this particular bull run will peak at $1800 sometime during the next three to four years.

Whether or not this turns out to be the case is beside the point. Savvy investors – not to mention central banks and governments – recognize gold's historical role in minimizing the impact of inflation, negative rates and currency depreciation. This is what I call the Fear Trade, and I always advocate up to a 10% weighting in gold that includes gold stocks as well as bullion, coins and jewelry.